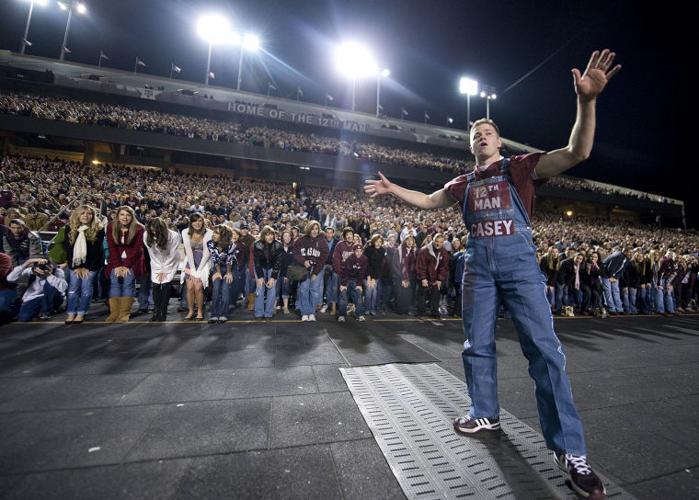 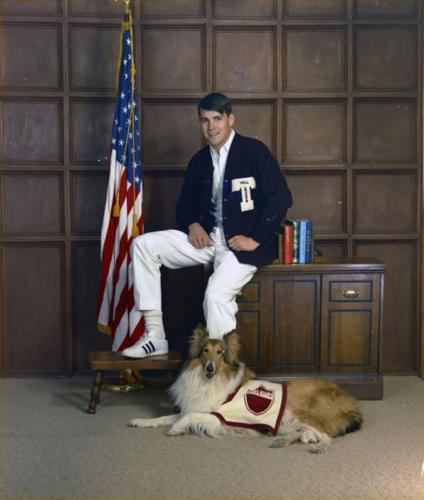 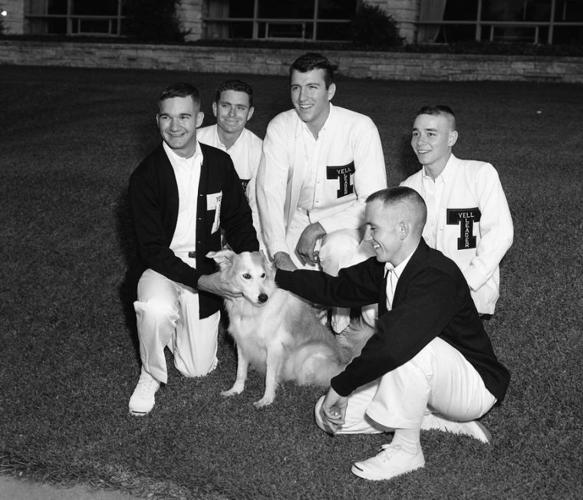 For a school that got its start as an all-male military college, there's little surprise that its cheerleaders would be men. Except Aggies don't cheer, they yell.

"Ten Aggies can yell louder than a hundred of anybody else," wrote Paul "Bear" Bryant, the legendary coach who led the Aggies from 1954 to 1957, in his autobiography.

Every spring, the student body elects three seniors and two juniors as yell leaders. The group attends all football games and home games for basketball, volleyball and soccer teams. The five men also make appearances around the country as A&M representatives.

The tradition of yell leaders got its start in 1907, when the university was known as Agriculture and Mechanical College of Texas, according to the Yell Leaders' website. The upperclassmen ordered a group of freshmen to entertain their dates during the football game. The women were threatening to leave because they were bored.

Football was still growing in popularity; it had only been played at A&M since 1894. The group of freshmen raided a janitor's closet, donned white coveralls and began coordinating when fans would do certain yells. Cushing Memorial Library has yell books on file dating as early as 1906. The first yell was used in 1896. A group of cadets would continue leading yells for the next few years, because it was so well received. The upperclassmen were jealous of the attention the freshmen received, so it was determined "fish" would no longer get the spotlight status, according to an October 1994 Texas Monthly article.

Until 1946, the number of yell leaders for each academic year fluctuated with as few as four, and as many as six. The 1946-1947 academic year saw a solidified five — three seniors and two juniors. Considered part of athletics, yell leaders were eligible to wear the letter sweaters with a Block T, similar to athletes in varsity sports. The senior yell leaders wore white, juniors wore navy blue. By the 1980s, the Block T letter sweaters had been phased out by the athletics department. Yell Leaders are still recognized by matching white shirts and pants at games. By the 1980s, the Yell Leaders began wearing painted overalls, bearing their name and class year, during Midnight Yell.

Sharing the Spirit of Aggieland

Yell practices are type of pep rally where "a new student often gets his or her first feeling of real school spirit," according to the Corps of Cadets Cadence. Practices were first held in 1913 as evening entertainment, according to Pride of Aggieland by Homer Jacobs. The yell leaders began using hand gestures, or pass backs, to signal certain yells. In 1931, the first Midnight Yell Practice occurred "just before the Texas game," according to letters by Henry Allen, class of 1934, on record with Cushing Library. Allen explained it was the football season of his sophomore year and a group was in T.D. "Peanut" Owens' room at Puryear Hall. Allen wrote it was his idea that the Corps should form a parade at the bugler's call signaling it was time to sleep. Someone in the group wanted to get the band involved and alert other dorms. After talking with J.U. "Two Gun Herman from Sherman" Parker and Earl J. "Horsefly" Berryhill, both senior yell leaders, it was determined everyone would meet at the Y.M.C.A Building at midnight. The "Y" was the hub of student of campus life at the time. However, the two explained they could not authorize the assembly, but would be there if others were. "The band and everybody showed up," Allen said. "And a good time was had by all."

Today, Midnight Yell Practice happens the night before each home football game. The Corps, Aggie Band and yell leaders parade to Kyle Field from the Quadrangle. The yell leaders conduct the crowd of students and alumni in various yells. The junior yell leaders do 100 push-ups plus their class year — so the class of 2014 would do 100 plus 14 — in the center of Kyle Field. The Spirit of Aggieland and The Aggie War Hymn are sung, and the yell leaders tell two fables of how the Aggies are going to win the game. Coaches and football players sometimes make brief remarks. The stadium lights are turned off and those in attendance kiss their dates in a tradition called "mugging down."

If the Aggies win a home game, the yell leaders are carried from Kyle Field and thrown in the Fish Pond, where another yell practice follows. For away games, a yell practice is organized at a designated location in the host city.

As a way to kick off the new academic year and football season, the yell leaders organized First Yell in 1999, which lasted until 2014. Comedians typically headlined the event at Reed Arena. Bill Engvall and Bill Cosby have both performed in Aggieland three times. Other past headliners include Martin Short, Wayne Brady, Jeff Foxworthy, Jeff Dunham and Brian Regan. Student performers such as the Singing Cadets and Aggie Wranglers have been the opening acts.

To mark the Aggies' debut in the Southeastern Conference in 2012, the First Yell organizers put on a concert at Kyle Field the night before Florida game. Former A&M students and successful singer-songwriters Robert Earl Keen, Rick Trevino and Granger Smith performed. It was only the second major concert at Kyle, after a 1998 charity event featuring Mark Chesnutt and Trace Adkins.

Exclusive to men, for now

The A&M Yell Leaders have remained all male. In 1968, the requirement that yell leaders had to be in the Corps was dropped, according to a November 2008 Battalion article. Drew Nelson served as the 31st yell leader to not be a member of the Corps during the 2012-2013 academic year.

So far, the few women who have run for yell leader have been unsuccessful. The first was Sarah Findlay during the 1981 elections. Mina Nashef and Samantha Ketcham campaigned in February 2013. It was initially reported Ketcham was to enter the runoff election. However, the votes were miscalculated, and she received 22 percent — not enough to be included in the runoff. Kaitlyn McCain and Viona Vraniqi ran in 2016.

In 1992, the first black yell leader was elected. Ronnie McDonald was also a non-reg. Since his time at A&M, McDonald has served 14 years as a Bastrop County judge. When initially elected as judge, he was the youngest county judge in Texas history. McDonald is now executive director for community relations and strategic partnerships for Texas A&M AgriLife. Arouna "Boo Boo" Davies Jr., class of 2002, was elected in 2001 as the second black yell leader in A&M history. In the 2013-2014 academic year, Chris Powell was first the black yell leader to also be a member of the Corps of Cadets.

One of the most famous former yell leaders is former Texas Gov. Rick Perry. As governor, Perry (class of 1972) returned to A&M and Bryan-College Station during campaign stops and yell leader reunions.

"Texas A&M forever shaped my character, and in the process changed my life," Perry told The Eagle in January 2002.

In a 1989 interview with the Abilene Reporter-News, Perry described how his experience as a yell leader impacted his campaigning and political success.

"Really, being yell leader had more political consequence than anything else," he said. "It was really visible."

Today in Aggie History, Nov. 5: Rick Perry was elected to his first full term as governor