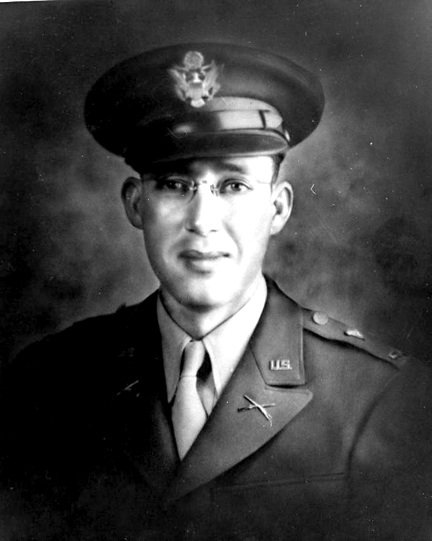 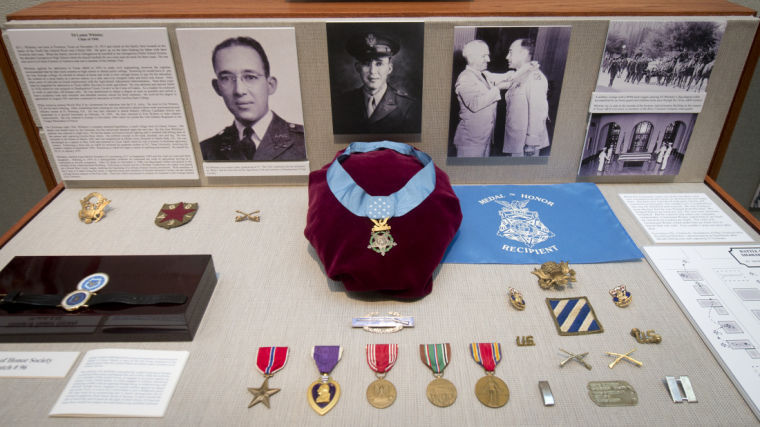 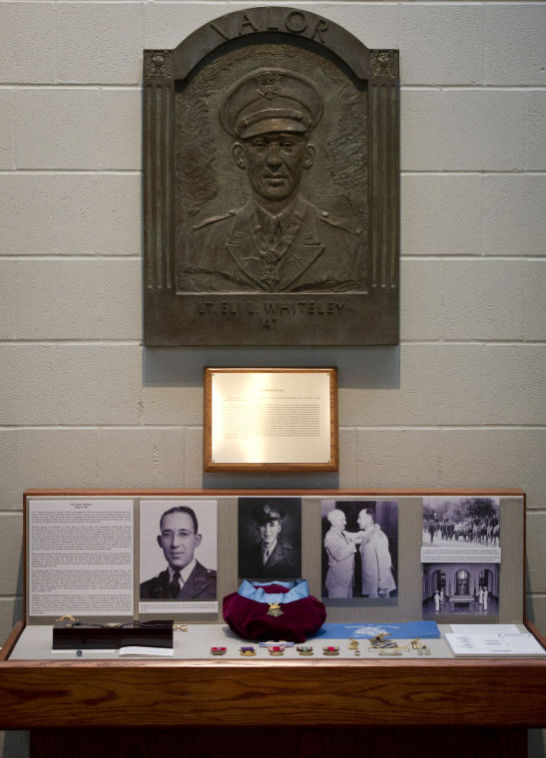 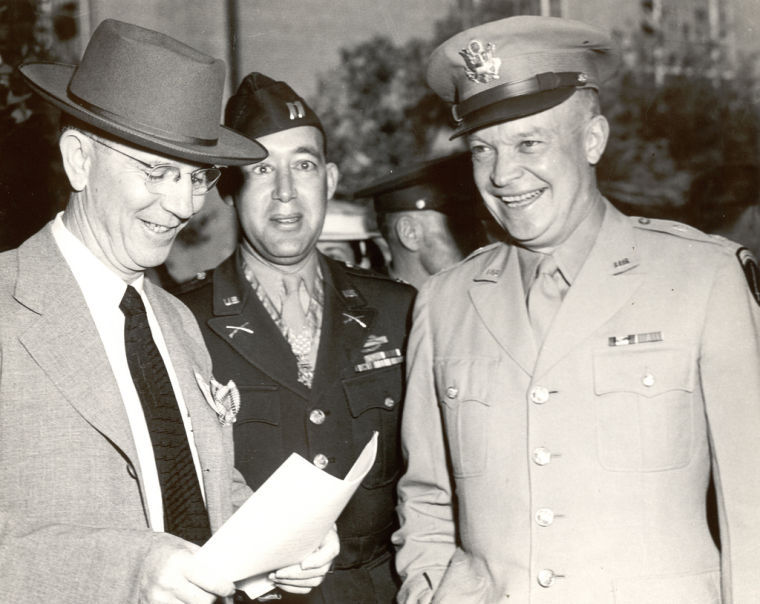 1st Lt. Eli Whiteley (center), class of 1941 and Medal of Honor recipient is with E.E. McQuillen (left) and Gen. Dwight D. Eisenhower during a campus visit. 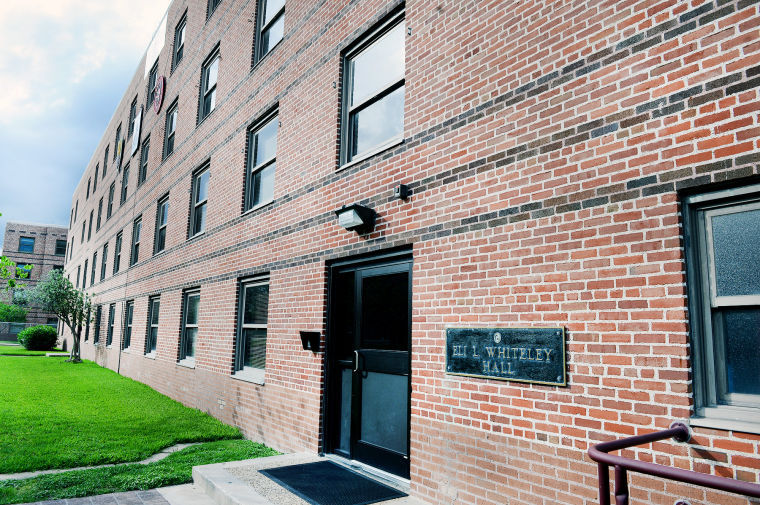 Eli Lamar Whiteley was born in 1913 and grew up working on the family farm about 15 miles northwest of Georgetown. He graduated from Georgetown High School in 1932. Whiteley applied to Texas A&M, but was told his grades had to be improved by retaking some high school courses or attending a junior college, according to Texas Aggie Medals of Honor by James R. Woodall. He elected to delay enrolling at A&M, instead working odd jobs and saving what he could.

Whiteley reapplied to A&M in 1938 and was accepted, this time selecting a major in agriculture. He hoped to later seek employment with the extension service, according to Texas Aggie Medals of Honor. Whiteley chose the cavalry branch of the ROTC for his military science. He worked off-campus jobs in Bryan on top of his course load. He attended summer school for three years and graduated in August 1941 with a bachelor of science degree in agronomy. Because he graduated in three years, Whiteley did not complete all of the required ROTC training, and, therefore, was not commissioned as an officer.

His daughter Ruth reflected that Whiteley would always say, “The Corps provided poor farm boys an opportunity to get a degree,” according to the Corps of Cadets Hall of Honor. She said her father was “very grateful for that opportunity.”

Whiteley moved to Raleigh, N.C., and began working on a master's degree at North Carolina State. He put his education on hold and volunteered for the Army in April 1942, training at Camp Wolters, Texas, according to the Texas State Historical Association. He completed officer training at Fort Benning, Ga., and was commissioned as a second lieutenant in February 1943, according to an exhibit at the Sam Houston Sanders Corps of Cadets Center. He trained infantry replacements at Camp Wolters until he was ordered to Europe in November 1944. He was promoted to first lieutenant in command of a platoon in Company L, 15th Infantry Regiment, 3rd Infantry Division.

The companies of the 15th Infantry Regiment went to Bennwihr and Sigolsheim, France, which had strong German troop presence. The units in the 15th attacked the towns on Dec. 23 and again the next day, ensuring that all houses were cleared of enemy soldiers. The assault resulted a high number of casualties. Company L, which Whiteley was with, lost 69 men, according to Texas Aggie Medals of Honor.

Whiteley was leading his platoon near Sigolsheim on Dec. 27, clearing houses and buildings taken over by Nazi troops, when his left arm was injured by enemy fire and shrapnel. He persevered, charged into a building alone while carrying a submachine gun and killed two German soldiers. He was first to storm the next house and killed two more. Whiteley and his platoon captured the remaining 11 enemy soldiers in the house.

The platoon continued along the street. Whiteley had no use of his injured arm by the time the platoon reached the next building. It was strongly defended, so Whiteley made another entryway by firing bazooka rockets at an exterior wall. He led the charge into the house while taking on enemy fire. Five enemy soldiers were killed and 12 surrendered.

A shell fragment pierced one of Whiteley's eyes, but he led the platoon to the next house until medical personnel forced him to evacuate.

“By his disregard for personal safety, his aggressiveness while suffering from severe wounds, his determined leadership and superb courage, [Whiteley] spearheaded an attack which cracked the core of enemy resistance in a vital area,” according to the Medal of Honor citation.

Whiteley was evacuated to hospitals in France, and three months later was well enough for transport to the United States in March 1945. He spent 18 months undergoing treatments and plastic surgery. Part of his recovery was being fitted with an artificial eye.

President Harry S. Truman presented Whiteley with the Medal of Honor during a ceremony in the East Room of the White House in August 1945. He was promoted to the rank of captain.

Ruth Whiteley said her father saw serving in the military as his duty.

Whiteley was discharged because of injuries in May 1946 and briefly returned to A&M to teach freshman agronomy classes. He reapplied to North Carolina State to resume his graduate work. Upon completing his studies in September 1949, he accepted a teaching position at A&M as a professor in the agronomy department.

He proposed to Anna Morris Saunders. The couple had dated while he was attending school in Raleigh. She moved to Texas, and they got married in 1949. The couple had two sons and three daughters.

Whiteley spent another 30 years as a professor and plant researcher at A&M. His primary focuses were soil management and the kenaf plant, which is widely used in paper products. Whiteley earned his doctorate degree in soil physics at A&M in 1959. He was the keynote speaker at the 1962 Aggie Muster ceremony. Upon retirement in 1979, he was named professor emeritus in the department of soil and crop sciences, and consulted for the university on research projects.

Whiteley died in 1986. In the obituary in the Houston Chronicle, A&M president Frank E. Vandiver said, “Dr. Whiteley's bravery in battle and lifelong dedication to his chosen profession — that of higher education — and to his family and his country personify the high ideals of Aggies everywhere. His life served as an example for all of us.”

Whiteley was the second person to lie in state in the rotunda of the Administration Building (the first was Gen. James Earl Rudder in 1970). Whiteley's funeral took place at Rudder Auditorium. The Corps of Cadets led a military-honors funeral procession across campus, with Parsons Mounted Cavalry pulling a World War I-style wagon carrying Whiteley's coffin. Whiteley is buried at the College Station Cemetery.

A Corps dorm and a campus park at Texas A&M are named in his honor. Whiteley Hall, dedicated in 1969, is located at the south end of the Quad, across from White Hall. Eli L. Whiteley Medal of Honor Park is on west campus, at the corner of University Drive and Wellborn Road.

Dorm 9 is located at a right angle to Leonard Hall. The Corps dorms were completed in 1939.

1st Lt. Eli Whiteley (center), class of 1941 and Medal of Honor recipient is with E.E. McQuillen (left) and Gen. Dwight D. Eisenhower during a campus visit.