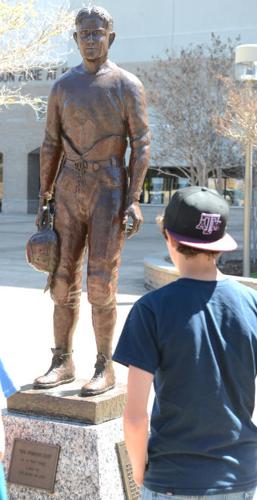 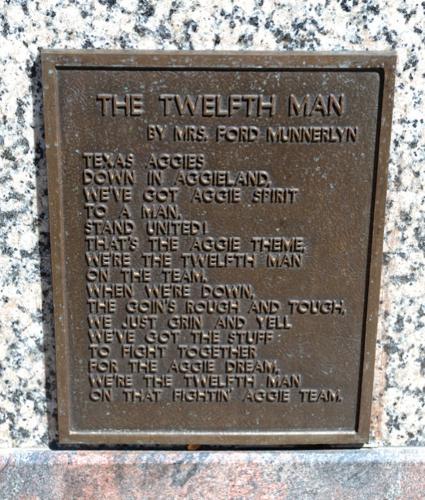 The tradition of the 12th Man at Texas A&M was born at the end of the 1921 football season. A sophomore named E. King Gill had been on the A&M football team as a backup running back, but decided he wanted to focus more on basketball. He quit the team in the middle of the season.

The Aggies went on to finish the regular season with a record of 5-1-2, winning the Southwest Conference and earning a trip to the Dixie Classic in Dallas on Jan. 2, 1922.

A&M was matched with powerful Centre College. The Praying Colonels went into the game with a 10-0 record under former Aggies' coach Charley Moran. Earlier in the season, Centre had become the first team outside the east and the first team since 1918 to defeat juggernaut Harvard. Centre was the No. 1 team in the country and sported three All-Americans.

Gill happened to be at the game in Dallas, his hometown. Gill told The Houston Post in 1971 that Waco sportswriter Jinx Tucker recognized him prior to kickoff and had Gill serve as his "spotter" in the press box. Gill would keep track of player participation and help Tucker get the story and stats accurately.

In the first half, though, the Aggies were destroyed by injuries. Starting running backs Sammy Sanders and Heine Weir left the game in the first quarter. Fullback Bull Johnson and quarterback A.B. Morris were knocked out, and backup halfback Louis Miller joined them soon after.

At that point, A&M coach Dana X. Bible looked toward the press box and waved Gill down to the sideline.

Gill told the Post that when he got to the sideline, Bible told him, "Boy, it doesn't look like I'm going to have enough players to finish the game. You may have to go in there and stand around for a while."

So Gill ran under the bleachers and put on Weir's uniform. He returned to the sideline, ready to aid the Aggies if needed. He was the only player on the bench for the rest of the game, but never got into the game.

The Aggies stunned Centre, 22-14, in a game The Eagle called "the most spectacular, most nerve tingling football game ever staged in the history of the game in the southwest."

Gill rejoined the team the following season and became a starting fullback. He scored and set up a touchdown in an upset win over the University of Texas in Austin. He was also a starting pitcher on the baseball team and an all-conference center on the basketball team. He graduated in 1924.

Gill spoke at the 1964 Muster, and his speech is on file at Cushing Memorial Library. In it, Gill said the 12th Man tradition caught on during the 1939 national championship season. E.E. McQuillen, who was at the 1922 Dixie Classic, was asked to re-create an event that would be suitable for radio and the memory he used was Gill coming out of the stands. From that point, students began standing for the entirety of games.

The entire A&M student body is now known as the 12th Man, standing during the entire game to show their support and waiting to be called upon if needed.

In 1980, the graduating class funded a statue of Gill, known as The 12th Man Statue. It stood outside The Zone on the north side of Kyle Field. A new version of the statue was unveiled in 2014, and the original was moved to Rudder Fountain.

A&M football coach Jackie Sherrill added another element in 1983 with the 12th Man Kickoff Team. Tryouts were held and 10 students would join the kicker during kickoffs at home games, instead of special teams players. The tradition has evolved to having one walk-on student as the 12th Man on home-game kickoffs.

Gill served as a military doctor for much of his life and retired near Corpus Christi. He died in 1974.

Though Gill didn't actually step on the field that January day, his eagerness to help his fellow students became one of the most widely recognized traditions in college football.

"I wish I could say that I went in and ran for the winning touchdown," he told the Post. "But I did not. I simply stood by in case my team needed me."

Jan. 2, 1922: A&M defeated defending national champions Centre College 22-14 in the Dixie Classic. The Aggies were the named the Southwest…