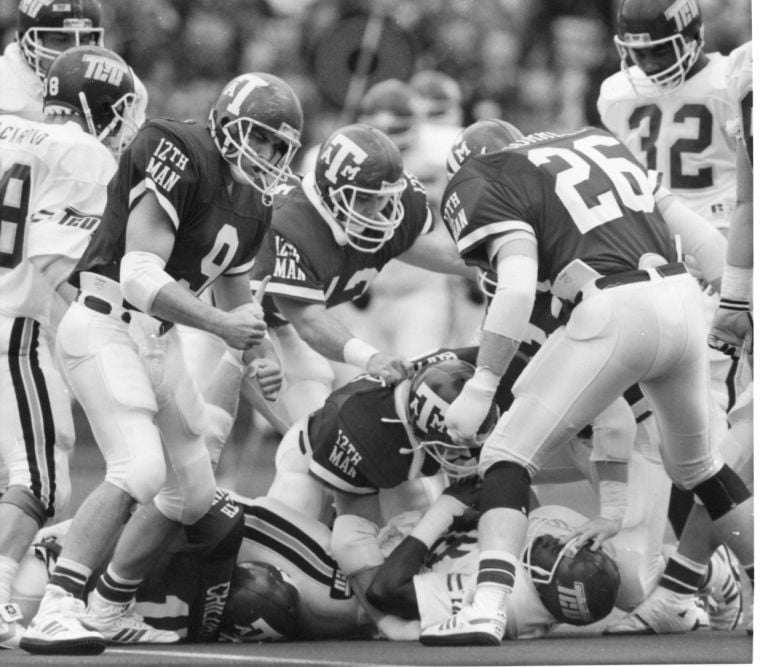 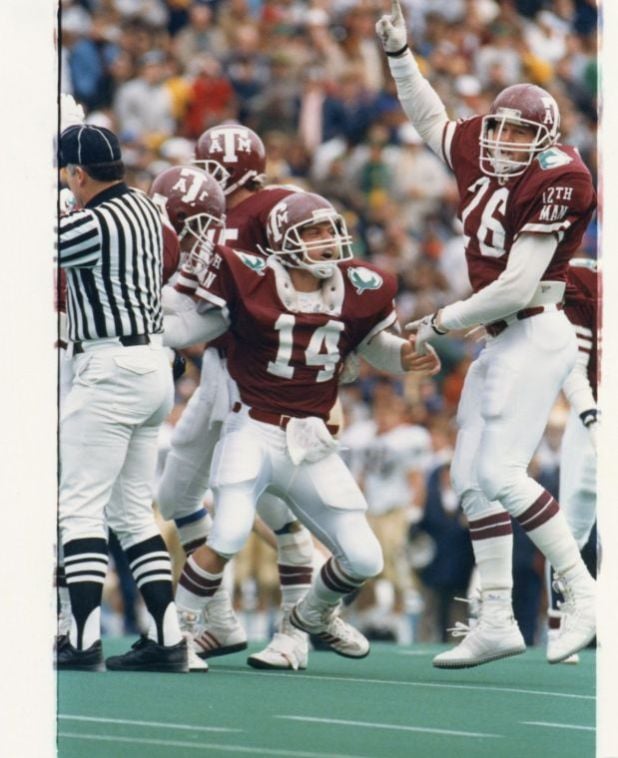 The 12th Man Kickoff Team celebrates during the 1986 Cotton Bowl. 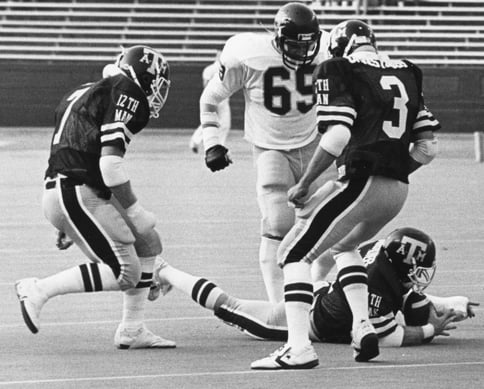 The advertisement in Texas A&M's student newspaper The Battalion was an eye-catcher: "Persons interested in trying out for the Twelfth Man Kickoff Team need to report to the Kyle Field Dressing Room on Monday, Feb. 21, at 5 p.m. No prior experience is required."

The team came from the brain of Jackie Sherrill, who was in his second year as Texas A&M's football coach. At the tail end of his first season in 1982, Sherrill was introduced to Aggie Bonfire. He often went out to the building site and watched students working around the clock to stack the logs, along with the tough leadership of the Redpots.

"I knew that I could find, out of 40-some-odd thousand students, 11 guys that would cover kickoffs, but have no regard for their body and be tough as nails," Sherrill said. "I just knew it would work."

It also added to the legend of E. King Gill, who was called down from the stands by coach Dana X. Bible after a slew of injuries on Jan. 2, 1922. Gill never got in the game, but his willingness to help his team was the beginning of A&M's 12th Man identity and spirit.

Sherrill enlisted assistant coach David Beal to guide the unit. At the first meeting, 252 students showed up, most of whom weren't cut out for major college football. Beal cut the team from 252 to 70, then to 40, and eventually 17. Those players would cover kickoffs during 1983 home games.

Former kickoff team member Tom Bevans said it was a huge risk for a coach who was already under a lot of pressure to win.

"I don't think the decision was widely accepted by the scholarship players," he said. "There was a lot riding on us, a bunch of guys who had no business being out there. But coach had so much trust in us."

Along with participating in scout team drills, the players would take part in 30 minutes of action against the first-teamers, before and after practice. Bevans said it was often the main event, with starters gathering along the sidelines to watch the walk-ons battle for respect.

Kickoff team member Robert Crouch said the underdogs often won those battles, and that's what made them believe it could work.

"We were running down with no fear," Crouch said, "and just taking it to these guys at full speed, every time."

Sherrill's bold move made national waves. Sports Illustrated ran a six-page spread on it leading up to the 1983 season.

"After that," Bevans said, "there was no hiding from it."

Sherrill said he had no worries leading up to the opener against Cal on Sept. 3, 1983, and neither did the walk-ons. At that week's press conference, he told the assembled reporters, "If California returns the opening kickoff for a touchdown, I'm going to have a lot of people throwing darts at me."

A&M planned an onside kick for the 12th Man debut. But the lone scholarship player on the team — kicker Alan Smith — only booted the ball 6 yards. (Onside kicks must travel 10 yards before the kicking team can recover the ball.)

After a second-half field goal, the 12th Man team took the field for a second time. Smith's kick was caught short of the goal line, where Cal's Dwight Garner began his return.

The Aggies got Garner at the 17.

"It was one of those moments that gives you chills," Crouch said.

The kickoff team didn't give up a return for a touchdown under Sherrill, and the former coach said he hardly remembered them allowing a team to get to the 50-yard line. During the first season, the Aggies gave up only 13.1 yards per return.

"If you look at NCAA kickoff coverage, if you have 25 yards average, you're good," Sherrill said.

Over the next five seasons, the Aggies led the country in covering kickoffs twice, and never finished out of the top five in that category.

The team also started the towel tradition at Kyle, waving their 12th Man towels every time they went out on the field.

The Aggies controlled the game from the start. Leading 28-10 late in the game, Brown returned a kick but was tackled by 12th Man team member Warren Barhorst, who grabbed the Heisman winner's towel from Brown's pants. Barhorst began running to the sideline with it. Brown ran after him, jumped on his back and took the towel back, leading to a scuffle.

''The towel was there, my mind thought of it, and I went for it," Barhorst said following the game.

Bevans said the team saw so much success because of their "kamikaze style."

The team allowed just 12.5 yards per kick return in its first five seasons. Sherrill was fired following the 1988 season, and defensive coordinator R.C. Slocum took over the program. In 1990, the kickoff team gave up its first touchdown to Texas Tech's Rodney Blackshear.

The odds were stacked against the kickoff team continuing. The NCAA had moved kickoffs back 10 yards, making kick returners bigger weapons. Slocum opted to fill the kickoff team with 10 scholarship players and one walk-on, who would wear the No. 12 jersey. That has continued to the current day Aggies.

For more than six seasons, Sherrill's risky idea was a huge success. The 12th Man Kickoff Team never gave up more than a 15-yard average on returns.

"It took a lot of guys that probably weren't good enough to play all the time, but with a lot of courage and desire, they could cover a kickoff," said former A&M coach Gene Stallings. "What a great idea. I wish I could have thought of it."

Feb. 21, 1983: Jackie Sherrill and the football staff hosted the first tryouts for the 12th Man Kickoff Team. The squad and A&M's 12th Man…

The 12th Man Kickoff Team celebrates during the 1986 Cotton Bowl.