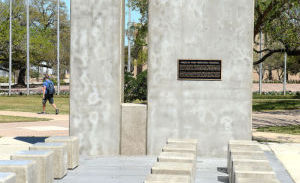 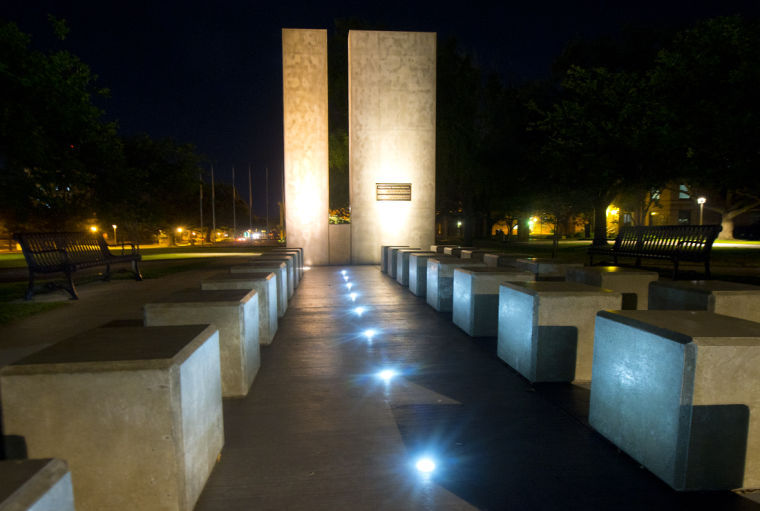 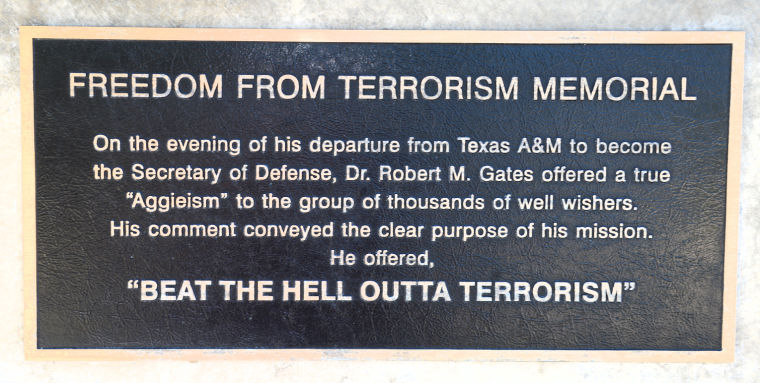 “Beat the hell outta terrorism,” were A&M President Robert Gates’ closing remarks on Dec. 8, 2006, following a student farewell. A week later, he assumed his appointment as U.S. Secretary of Defense.

The memorial was dedicated in 2008. It is a tribute to not only all the people who died during the Sept. 11, 2001, attacks, but to Aggies who died that day and during the war on terrorism. The concrete monument also stands as a reminder of Aggies working to protect America’s freedom. It was designed by four architecture students and was a gift from the classes of 1968 and 2003.

The memorial is located at the corner of Coke and Lubbock Streets, close to the Corps Quadrangle. According to the plaque, the 22-foot tall vertical walls represent the 9/11 attacks' impact on American culture and people's recovery. The larger segment bears a plaque with Gates’ words. The gap represents people who died to protect freedom and the rough texture of the materials on one of the walls is for the scarring of the American people. The rows of twelve cubes signify the Twelfth Man and the Aggie Spirit, and a reminder of those who died fighting terrorism and continue to protect our country.

Sept. 11, 1999: Reveille V was buried next to her predecessors at the north end of Kyle Field.

Oct. 17, 2008: The Freedom From Terrorism Memorial was dedicated. It is located at the corner of Coke and Lubbock streets, in proximity to the…