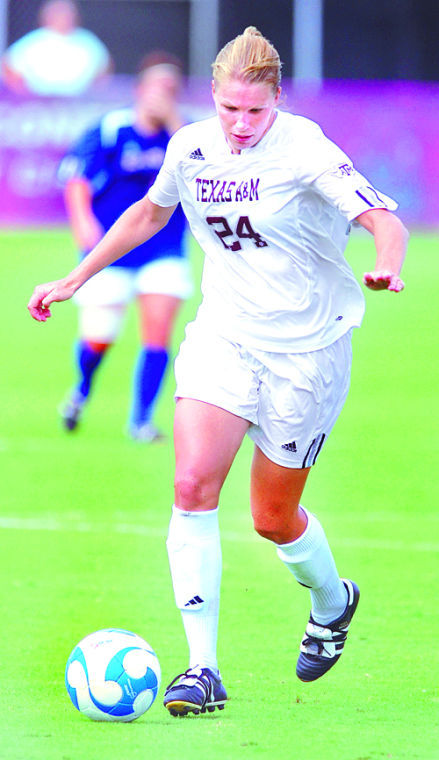 Ashlee Pistorius finished her time at A&M with 82 goals and 194 points. 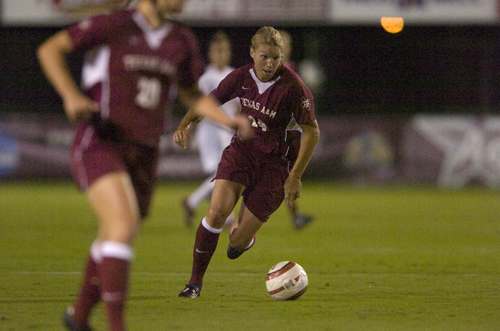 Ashlee Pistorius was a three-time All-American at Texas A&M.

Ashlee Pistorius was looking for a family-type environment while being recruited in 2004 in Illinois. Her mother would drive her three hours to St. Louis three days a week to play for her club soccer team in high school.

When she arrived on the Texas A&M campus for her official recruiting visit, she says she knew it was where she needed to be.

"You get the total package when you come," she said. "The soccer atmosphere, the fans at the games, great field. The team is all about family. The coaches were awesome, down to earth, willing to talk to you. A lot of my other friends at other schools, they didn't have that closeness."

Pistorius was born deaf in her right ear. Communication is crucial in soccer, but she says it wasn't an issue because she never knew anything different. Guerrieri believes that helped her to become more reliant on her vision and her feel of the game.

"Most kids can play with their head down, keep their eye on the ball and hear where their teammates are," he said. "Well, she never could. So she had to play with her head up to be able to scan the field."

In her first year at A&M, she scored 15 goals and led the Big 12 with seven game-winning goals. She was named Big 12 Rookie of the Year.

By the time she was a sophomore, Guerrieri saw a player that was ahead of the game.

"She was playing two and three steps ahead of the game, even though she was our slowest player," he said. "She was our quickest tactically and a very quick thinker and very skillful. So she solved problems before they arrived."

"I don't think I felt I was special," Pistorius says. "I felt we had a special team. Everybody did their part."

She was a part of an 11-woman recruiting class that came to A&M. In their four years together, the players won 82 games, the winningest class in program history.

Pistorius finished her time at A&M with 82 goals and 194 points. She led the country in 2007 with 25 goals. She is the all-time scoring leader in A&M and Big 12 history, and was a three-time All-American. And she was one of three finalists in 2007 for the M.A.C Hermann Trophy — the Heisman Trophy of college soccer.

"I look at the other places I could've gone and I'm so thankful I ended up at A&M," she said. "It was the perfect college experience. It was a fun four years and I'm going to have those memories for the rest of my life."

Pistorius played for a season with St. Louis Athletica in the Women's Professional Soccer League, but then decided that she wanted to start a family with her husband Josh. The two had their first child, Gavin, three years ago.

She works in sales, and she coaches with nearby St. Charles Community College in St. Louis.

"I learned so much from my coaches that I wanted to give back," she said. "It's the learning experience from going from a girl to a woman and how they impact you as a person. They change your life in those ways."

Ashlee Pistorius finished her time at A&M with 82 goals and 194 points.

Ashlee Pistorius was a three-time All-American at Texas A&M.