A&M returned 20 starters, but had to overcome the loss of safety Dave Elmendorf, as the season began. Playboy named the Aggies the "surprise team of the year." Mark Green took the reins at quarterback but struggled as the team began the season 1-3, including a shutout loss to Cincinnati. During a loss to TCU, Joe Mac King took over at quarterback, and Green was moved to tailback. He proved to be formidable with the ball in his hands and ran for 382 yards on 108 carries as the Aggies ran off four consecutive victories. Needing a win over Texas for a bowl berth, A&M was steamrolled by their rivals, 34-14 at Kyle Field, as the Longhorns celebrated their fourth consecutive conference championship. Despite the best efforts of leading tackler Grady Hoermann, the Longhorns scored on three consecutive possessions in the first half. King threw for a touchdown and Green ran for a score in the loss. Stallings' contract wasn’t renewed at the end of the season and his tenure at A&M ended with an overall record of 27-45-1. "I told them [about his players] it had been a pleasure being associated with such a fine group of gentlemen," Stallings said after the loss to Texas — his final game as coach. A&M offered the head coaching job to LSU's Charlie McClendon for $1 million over 10 seasons, but he declined. He told the Times-Picayune, "I’m LSU through and through. Being at a place for 19 years helps you make up your mind." Instead, the Aggies hired UT offensive coordinator Emory Bellard for $30,000 per year. Upon being hired, Bellard — who invented the Wishbone offense — said, "I feel there are definitely some football players at A&M. That was certainly one of the aspects I considered in deciding to come here. A&M, to me, has every situation you’re looking for." 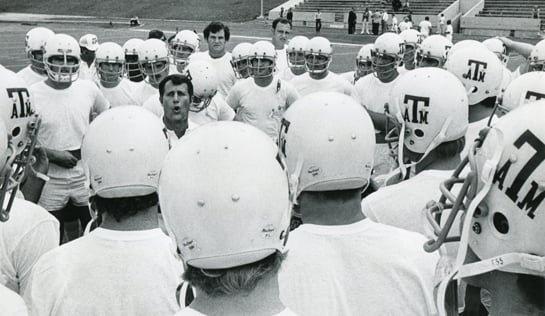 After Gene Stallings was fired, Emory Bellard was hired from the University of Texas to take over the A&M football program. 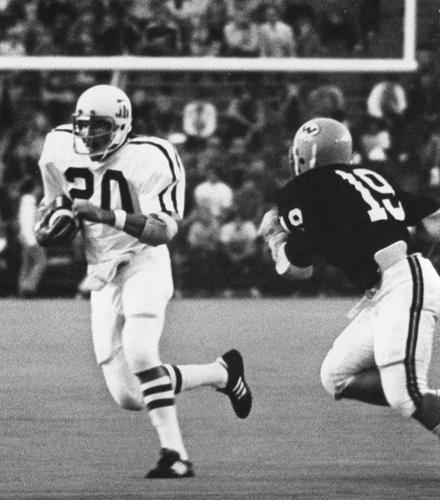 Mark Green made the switch from quarterback to running back in 1971.