Tom Wilson implemented the I-formation in his first full season of head coach in hopes of showcasing speedy running back Curtis Dickey. Mike Mosley returned at quarterback, and the defense was led by Jacob Green and Carl Grulich. Still, A&M dropped its first two games to BYU and Baylor, giving the Aggies their first 0-2 start since 1969. A&M surprised No. 6 Penn State with a 27-14 win on the road. Dickey finished the game with 184 yards on 31 carries and three touchdowns. The Aggies defeated Memphis 17-7 the next week as Grulich had a decisive interception. The Aggies blew a halftime lead in Lubbock and fell to Tech, 21-20, as the Red Raiders scored 12 unanswered points. The following week, the A&M defense allowed a game-winning touchdown drive to Houston in 60 seconds. A&M beat lowly Rice and blew out SMU, 47-14, as Mosley ran for two touchdowns and threw for another. The team split its last two as Dickey sat with a broken rib. But the team closed the season out with a 13-7 upset win over No. 6 Texas at Kyle Field. Green led an outstanding defensive attack with 10 tackles and Dickey returned to score the decisive touchdown. Following the win, Tom Wilson told The Eagle, "This team is a winner. I've never been ashamed of them. We're now where we should have been the third or fourth game. They've fought hard and with lots of pride … We knew today if we executed we felt we could win." A&M finished 6-5, but didn’t qualify for a bowl game for the first time in six seasons. 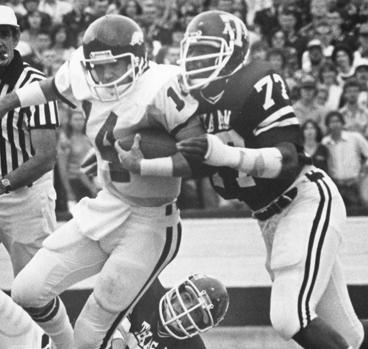 Jacob Green's 20 sacks in 1979 helped him earned All-American status. He finished his A&M career with the most sacks in school history (37), and still ranks second on that list, behind Aaron Wallace's 42. 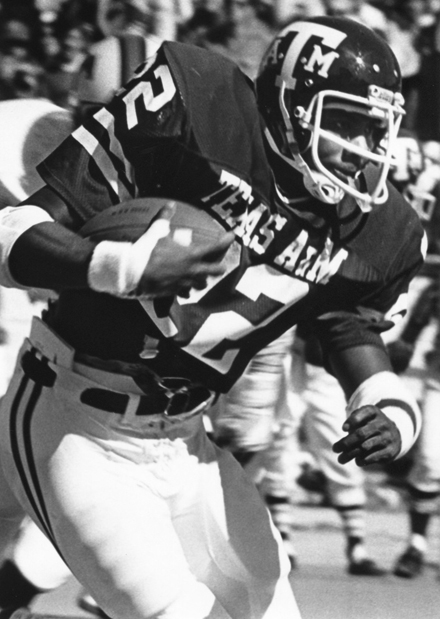