Raymond George, originally hired in the offseason as the offensive line coach, took over the head coaching position following the surprising resignation of Harry Stiteler in March. A&M expected a memorable season with All-American center Hugh Meyer, fullback Bob Smith, quarterback Ray Graves and running backs Billy Tidwell, Glenn Lippman and Yale Lary. The team was picked to win the Southwest Conference and was No. 6 in the preseason rankings. The Aggies began the season with a 21-14 win at UCLA, in which Graves threw two touchdowns. After a win over Texas Tech, the team hosted No. 4 Oklahoma, led by coach Bud Wilkinson. Jack Little and the A&M defense bottled up the famous split "T" formation in a 14-7 win at Kyle Field. A&M got an easy win over Trinity, then traveled to Fort Worth to take on TCU. A&M, nursing a 14-13 lead, turned it over late in the game. Ray McKown ran in the winning touchdown for the Horned Frogs with 1:35 remaining, giving TCU a shocking 20-14 upset. The following week, the team tied undefeated Baylor, despite injuries to Smith, Lippman and Tidwell. No. 18 A&M fell to Arkansas by 12 points and tied with SMU. A week later, Smith ran for 70 yards on 10 carries, but A&M lost to Rice, 28-13. In the season finale, Smith hurt his back on the opening kickoff. Lary took his place and ran for a 68-yard touchdown and caught another. A 40-yard field goal try from Texas' June Davis fell short, and the Aggies pulled off a Thanksgiving miracle in beating Texas 22-21 for the first time in 12 years. In the locker room, George told The Eagle, with tears streaming down his face, "I'm ready to settle down here now for 15 or 20 years. It was a fine team victory." The Aggies finished the season 5-3-2. 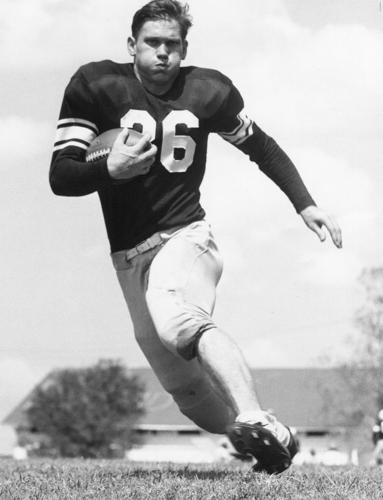 Bob Smith starred at fullback for the Aggies. 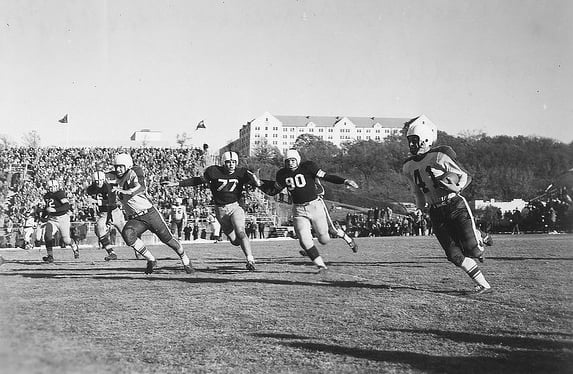