Receiver Jack Evans, captain Heine Weir, quarterback Thomas "Puny" Wilson and running back Sammy Sanders returned. The Aggies began the season with a 14-7 victory over Howard Payne. Against SMU, Bugs Morriss ran for a 45-yard touchdown in a 13-0 victory. Three days later, the team took a tough loss to LSU, 6-0. A&M rebounded for a 17-13 win over Arizona. The Aggies got a 23-7 win over Oklahoma A&M the next week, in which Wilson blocked a punt which Sanders scooped up and scored for the decisive points. Facing off with Baylor, A&M was down 3-0 late in the fourth quarter. But Wilson caught a fourth down pass for a touchdown, and the Aggies ended up with a 14-3 win. After tying Rice, A&M took on Texas. In a game for the conference crown, the teams battled to a scoreless tie in front of 15,000 at Kyle Field. By virtue of playing more games than the Horns, the Aggies were awarded the conference and a spot in the Dixie Classic against defending national champion Centre College. At halftime, injuries had piled up and four defenders were out. Dana X. Bible called into the  stands for E. King Gill (left) — a reserve who had left the team after the regular season to play basketball. He donned Weir's uniform and stood on the sidelines, ready to play if called on. By game's end, he was the only Aggie left on the sideline. A&M upset Centre, 22-14. The Eagle called it "The most spectacular, most nerve tingling football game ever staged in the history of the game in the southwest." Because of Gill's willingness to stand on the sidelines, ready to play, the tradition of the 12th Man was born. The tradition continues as students standing at sporting events, showing that they're willing to help their school if called upon. Gill would say later, "I wish I could say that I went in and ran for the winning touchdown, but I did not. I simply stood by in case my team needed me." 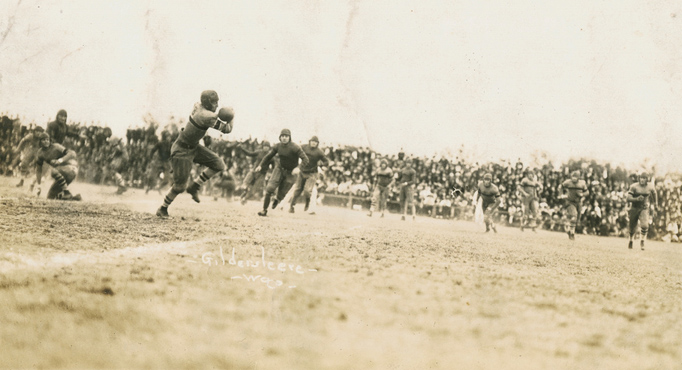