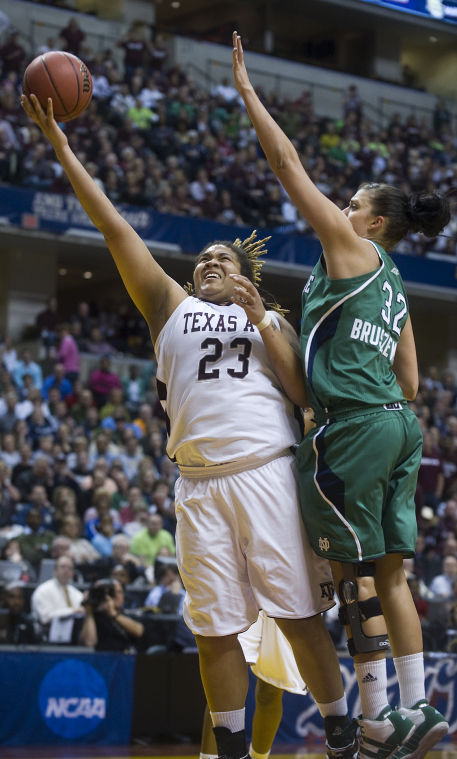 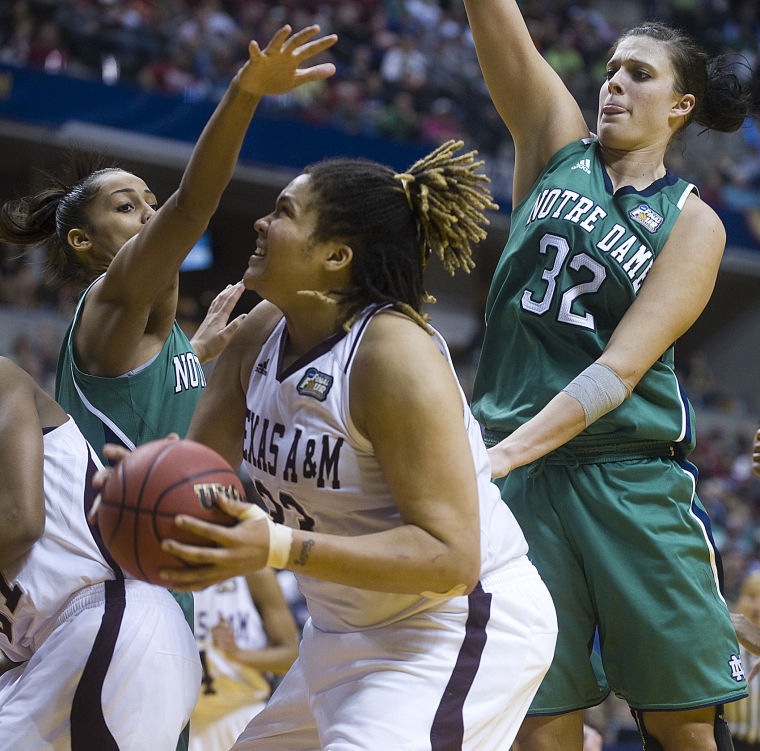 "She was our Charles Barkley," he said. "But she wasn't as outspoken."

The mild-mannered Adams arrived at A&M prior to her junior year, after dominating the junior college ranks for two seasons. She was named a first team All-American both seasons at Jefferson College in Missouri. She led her team to a 34-1 record and the JUCO national championship as a sophomore, making her a coveted prospect as she moved up to Division I.

She narrowed her options down to Louisville and A&M — a program on the upswing that had qualified for five consecutive NCAA tournaments. She eventually chose A&M.

"I felt it was better family-oriented and I saw that Coach Blair was a good coach," she said. "I felt it was all about family and it was the place for me."

As a junior, she came off the bench for Blair because her weight was an issue, limiting her to less than 25 minutes per game. But Adams was able to get 16.3 points and 5.8 rebounds per game, earning honorable mention All-American honors.

That team saw its season end in a second-round NCAA tournament loss to Gonzaga. Following the game, she and the team set a goal.

"As a team, we came together and said we were all going to stay over the summer and work hard," she said. "We didn't expect to go to the national championship, but we expected to have a great season."

Adams focused on dropping the pounds that hampered her during her first season at A&M. She lost 50 pounds leading up to the season, slimming down to 230 pounds. Looking back on it, she doesn't think it was too strenuous.

"It wasn't that difficult," she said. "I just had to maintain it and had to get down to where I could play 35 minutes any given night. I just knew that if I maintained my weight, I could be a great player and we could win a national championship."

Adams made the starting lineup, and the Aggies cruised to a 27-5 season, losing in the Big 12 championship game to Baylor and 6-foot-8 star Brittney Griner. Adams played 30.6 minutes per game, averaging 22.3 points and 8.5 rebounds. As a result, she was named a first team All-American.

"Her hands and feet were as good as any post player I've ever had," Blair said.

The team got a No. 2 seed but was placed in the Dallas region with Baylor — a team that had beaten them three consecutive times. After rolling over McNeese State, Rutgers and Georgia, A&M got the matchup it wanted — at least according to Adams.

"We were excited," she said. "I knew they didn't want to play us a fourth time. We came out focused and mentally prepared to beat the Baylor team."

The Aggies stormed out to a 16-point lead and held on in the second half as the Bears made a comeback. Adams and the Aggies held Griner to just 6-for-18 shooting. A late steal by A&M's Sydney Colson and the ensuing 3-point play sealed the historic victory for A&M. The 58-46 upset sent the Aggies to their first Final Four.

The team then upset Stanford with a thrilling comeback. After being down by 10 points with less than six minutes to go, the Aggies held the Cardinals to just two baskets the rest of the game — one of which came with 9 seconds remaining, which gave Stanford a 1-point lead. Colson took the inbounds pass, raced down the court and found a cutting Tyra White for a game-winning layup. Adams finished with 16 points. She hit a big 3-point shot during the Aggies' 11-0 run that gave them their first lead of the game.

The 63-62 victory put the Aggies in the national championship game in Indianapolis, where they'd take on Notre Dame.

A&M trailed the Irish at halftime, 35-33. Adams had 8 points. Blair said she wasn't getting in the paint enough.

The undersized Irish had no answer for Adams. She scored 22 points in the second half and led her team to a 76-70 victory and a title.

"I wasn't going to let my team down," she said. "We came that far to get a national championship. I just wanted to carry them. So that's what we did."

Adams' 30 points were the second-highest total in a championship game, and she was named the tournament's Most Outstanding Player. When the clock hit triple zero, Adams pointed skyward.

Following the season, she was picked by the San Antonio Silver Stars in the second round of the WNBA Draft. During her first three seasons, she's averaged 12.6 points per game and has appeared in an All-Star game.

"It is great," she said. "I've got great teammates. We are all just one team focused on one goal. I'm going up against great players night in, night out."

Just months after leaving A&M, Adams returned to see her number retired and raised into the Reed Arena rafters, alongside men's basketball star Acie Law IV - another honor for the greatest women's basketball player ever to play at A&M.

"I want Aggies to remember me just as a nice and sweet person, but a monster on the court," she said. "The person who took A&M to a national championship and put them on my back."