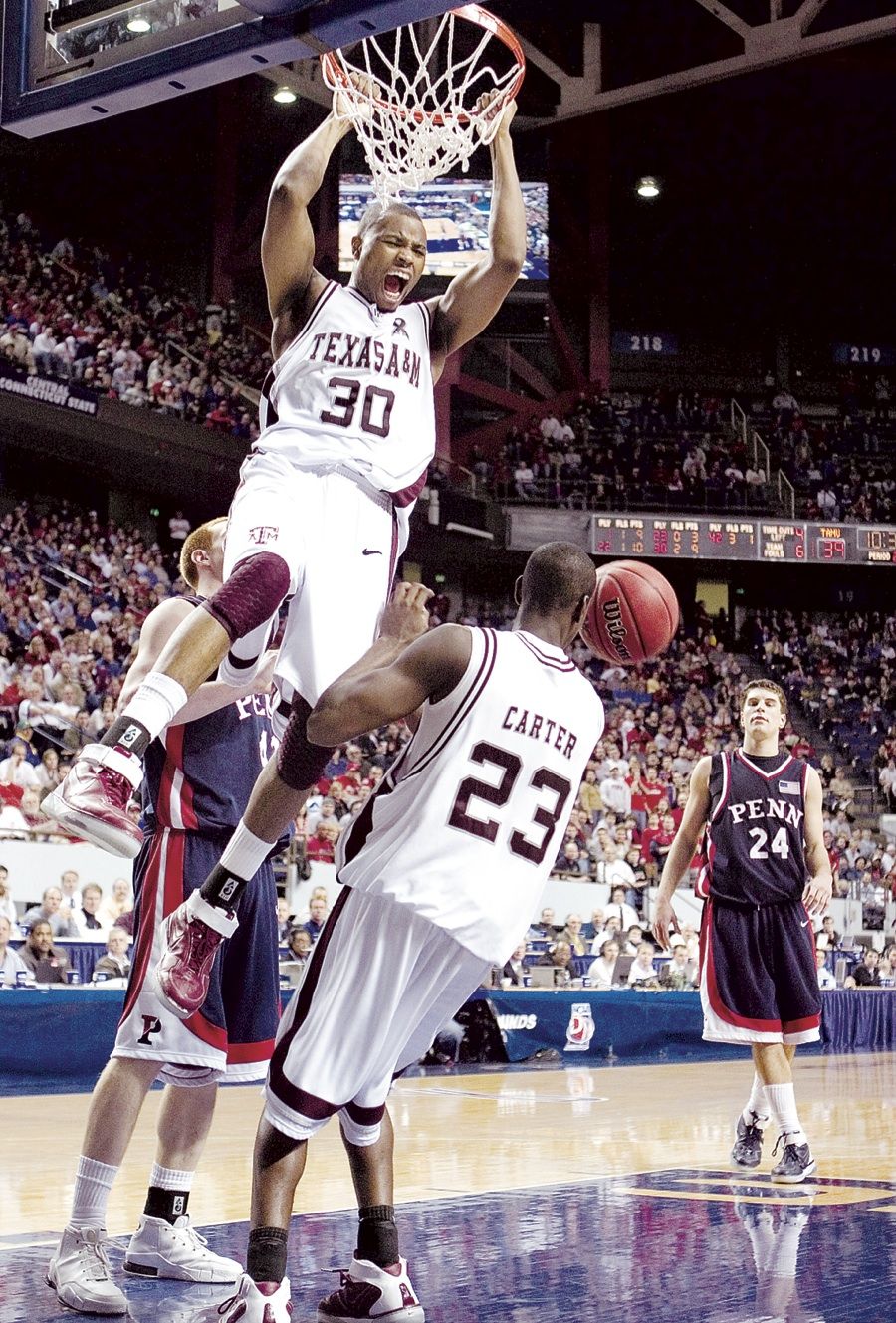 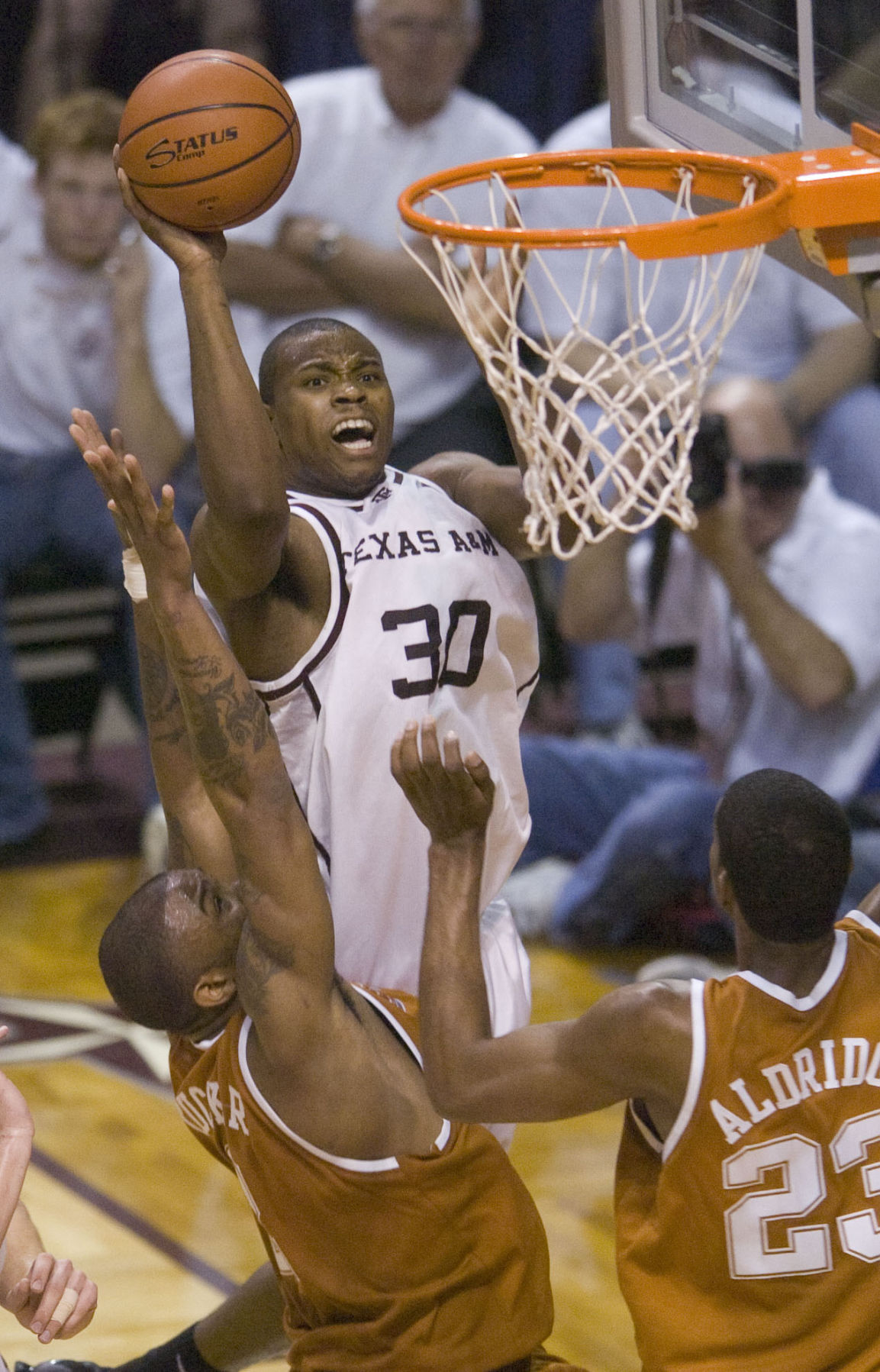 Texas A&M's Joseph Jones goes up for a shot against Texas on March 1, 2006, at Reed Arena.

Joseph Jones ended his Texas A&M career in 2008 as one of the most prolific players in program history. He ranks in A&M's top 10 all time in points, rebounds and blocks. He started 131 games, more than any player in A&M history except his classmate Dominique Kirk. (Jones missed a game with a sprained ankle his sophomore season.)

From nearby Normangee, Jones was a three-star prospect and ranked 102nd overall in the class of 2004, according to Rivals.com. He committed to A&M in 2003 while Melvin Watkins was the head coach, and stayed with his commitment after Watkins was fired following a winless campaign in Big 12 play.

"Throughout the first year, it was being instilled in us that we had a special team," Jones recalled in a recent interview. "That we had all the right pieces on that team to go pretty far and win a lot of games and hopefully make a tournament."

The season would end with a triumph — Acie Law's buzzer-beater in the regular season finale on March 1, known simply as "The Shot." But on Feb. 11, Jones had some late-game heroics of his own.

In what should perhaps be known as "The Shot Before 'The Shot,'" Jones hit a high-post jumper in the closing seconds against Oklahoma State to give A&M a 46-44 win at Reed Arena.

That was the second win in a string of eight straight victories, with five of those wins coming by four points or fewer. According to Jones, closing out those games was the most difficult part in getting A&M back to the tournament.

"The hardest thing was just seeing it through," Jones said. "We had a great group of guys. We had some tough guys, and guys that played together at all times and did whatever it took to win. We just had to find a way to see it through."

The 12th-seeded Aggies upset No. 5 seed Syracuse in the opening round of the tournament, and fell to LSU by one point in the second round.

That effort paved the way for the best season in recent A&M basketball history. In 2007, A&M returned to the tournament and made the Sweet 16 by defeating Pennsylvania and Louisville.

Yet when Jones reflects on the Aggies in the tournament, it's the first year that comes to mind.

"That's what prepared us to have such a great season in '06-'07, that's what got us there," Jones said. "We got a small taste of the tournament and we saw how well we played and what we could be, and that got us more hungry for next year. It showed the following year. We had a great year."

The 2007 season included the Aggies climbing as high as No. 6 in the polls. It had a heartbreaking ending, as the team came up just a couple points shy of beating Memphis and advancing to the program's first Elite Eight.

"My memory of those tournament games we lost, I have no memory of those games anymore," he said. "I don't know if it's traumatizing or what, but those memories have kinda faded away a little bit."

What he does remember is being part of the basketball movement in Aggieland, and how it felt to walk out for warmups and see the student section already full.

"They gave us all the energy that we needed," he said. "We knew we had them backing us each and every game in Reed Arena. We came out for warmups and they already had the gym packed. It was great just to be on the court during those times. The love that they showed for us each and every game, you can't explain it."

Since graduating from A&M, Jones has played overseas in Turkey, France and Spain. He's currently playing for Hapoel Jarusalem in Israel, where he averages 9 points and 5 rebounds per game.

Jones said he didn't know about basketball's popularity overseas when he was growing up in Normangee, much less that he could make a living playing there.

"To find out how much love they have for the game here is just icing on the cake," he said. "They allow me to keep living my dream away from home."

Texas A&M's Joseph Jones goes up for a shot against Texas on March 1, 2006, at Reed Arena.