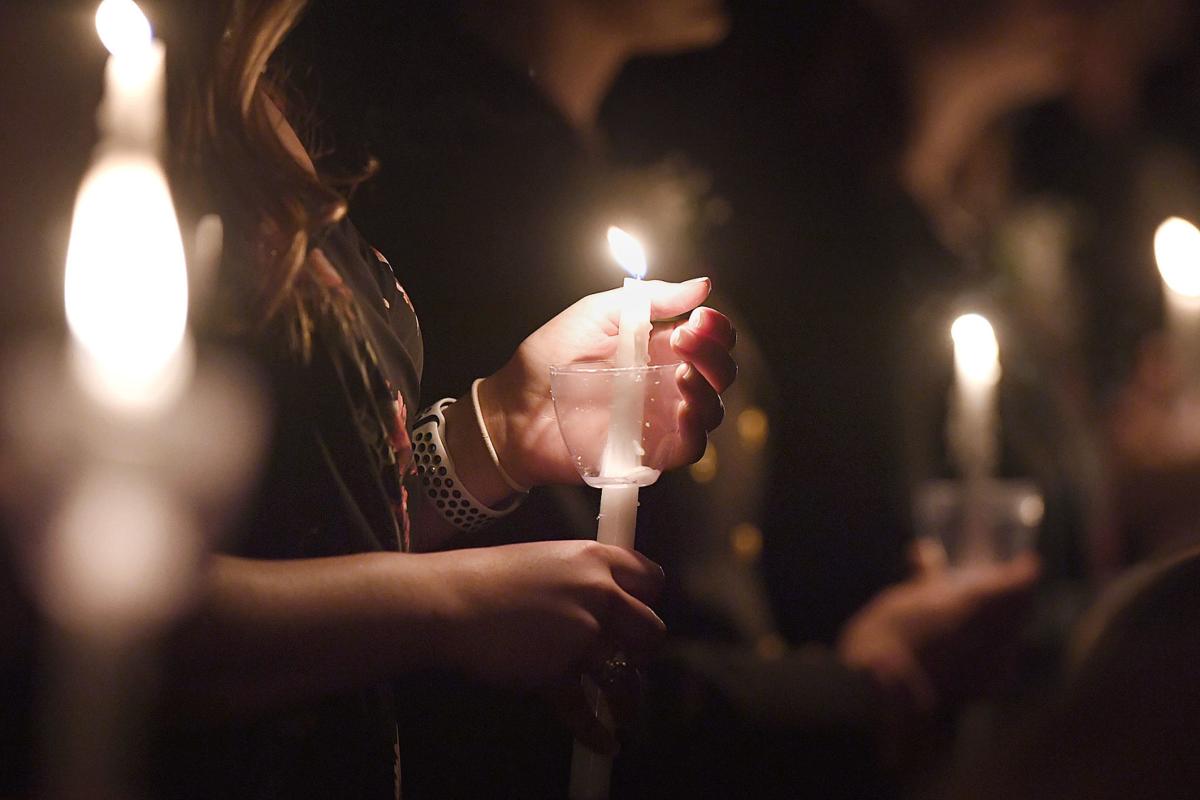 Candles are lit inside Reed Arena as Aggies who have passed away in the past year are remembered during the Roll Call for the Absent at Monday night’s Muster ceremony. 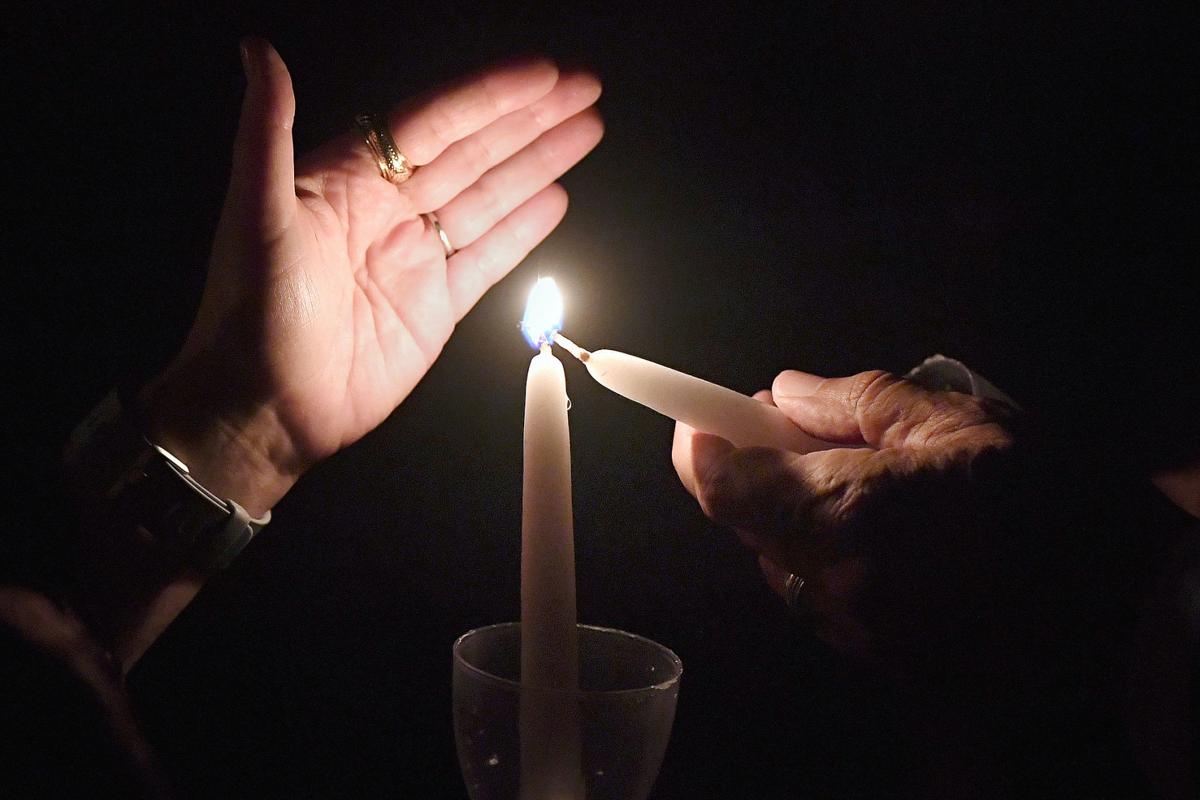 One candle is used to light another as Aggies who have passed away in the past year are remembered Monday night during the Roll Call for the Absent. 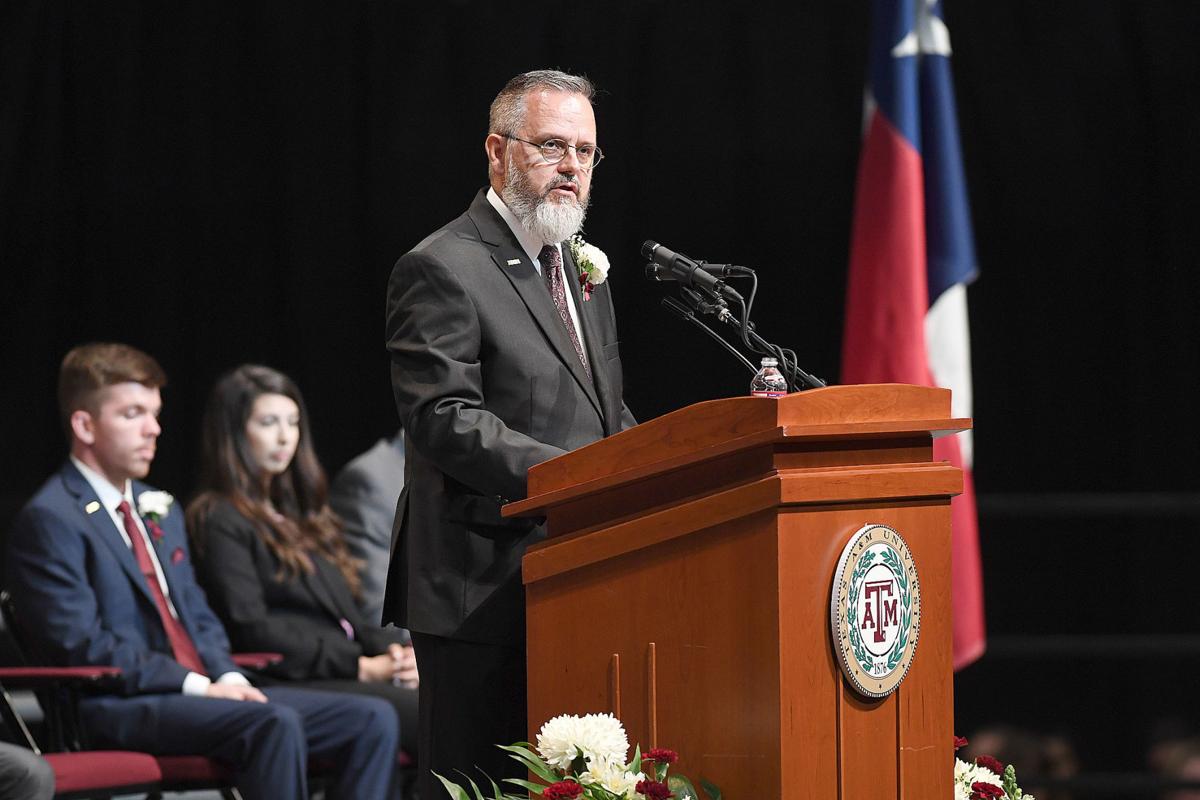 Joining at least 300 groups of Aggies worldwide, thousands of former and current students filled both levels of Reed Arena Monday night for the somber Aggie Campus Muster Ceremony as the families of Aggies who died within the last year filled the arena’s floor.

People holding candles surrounded the hundreds of family members gathered. For about 30 minutes, the flames were passed along steadily and slowly with the utterance of each fallen Aggie’s name. Aside from the coughs from some in attendance, the only sounds inside Reed Arena for about 30 minutes were the were the names of Aggies who died in the last year and the customary, somber refrain of “here.”

A&M students Amy Burdette and Martin Osorio slowly read aloud the names of students and former students who have died in the preceding year. Attendees responded “here,” with the deceased Aggie’s family members often saying it a quarter-beat before the rest of the crowd.

In the event’s official program, historian John A. Adams wrote a five-paragraph primer on Aggie Muster, in which he described it as “more than a ceremony.”

“It represents a pledge and a responsibility that A&M men and women have handed down from year to year, from generation to generation,” Adams wrote.

“This evening, we feel both the joy of reunion and the sorrow of loss,” Shakesby said. “We gather not only in sorrow for the Aggies lost but also with the joy of having lived with them and gratitude for having known and loved them.

“There are few things in life harder than losing a loved one, and as Aggies, we choose not to ignore this sorrow, but rather bring it into the light,” she said, before referencing the tradition of lighting candles in honor of the fallen.

Texas A&M University President Michael K. Young spoke about the mutual love between the Bushes and the Texas A&M community, and told the story of the 41st president’s request to have The Aggie War Hymn play as pallbearers removed Bush’s casket from the train that returned his body to Aggieland in December.

Young said Muster is a prime example of the lifelong bond Aggies share.

“Tonight may be your first Muster or one of many, but I find no matter how many times I stand here at Muster, each and every year is a remarkable witness to the shared respect and love Aggies have for one another,” he said.

As part of the event, the Ross Volunteers performed a rifle volley, a team played taps, and the evening featured musical selections from the Women’s Chorus, Singing Cadets, the Fightin’ Texas Aggie Band and the Century Singers.

“The Muster tradition had its beginnings at a meeting of the Association of Ex-Cadets on June 26, 1883.” April 21 became the customary date for the ceremony in the 1980s, he wrote, as the Corps of Cadets annually visited the San Jacinto battlefield.

“In the early 1900s, it was agreed that in addition to honoring the freedom of Texas, April 21 would be a time to pay homage to all students and former students who had passed on, and some living comrade would answer ‘Here’ when the ‘Roll Call for the Absent’ was read,” Adams wrote.

Organizers moved the 2019 Muster to April 22 due to the Easter holiday on the event’s usual date.

“During World War I, groups of Aggies met in trenches all over Europe and at Army posts in America,” he said.

More than 1,600 Aggies from around the world who have died during the past year were honored Sunday at a single location, with the reading of …

Candles are lit inside Reed Arena as Aggies who have passed away in the past year are remembered during the Roll Call for the Absent at Monday night’s Muster ceremony.

One candle is used to light another as Aggies who have passed away in the past year are remembered Monday night during the Roll Call for the Absent.