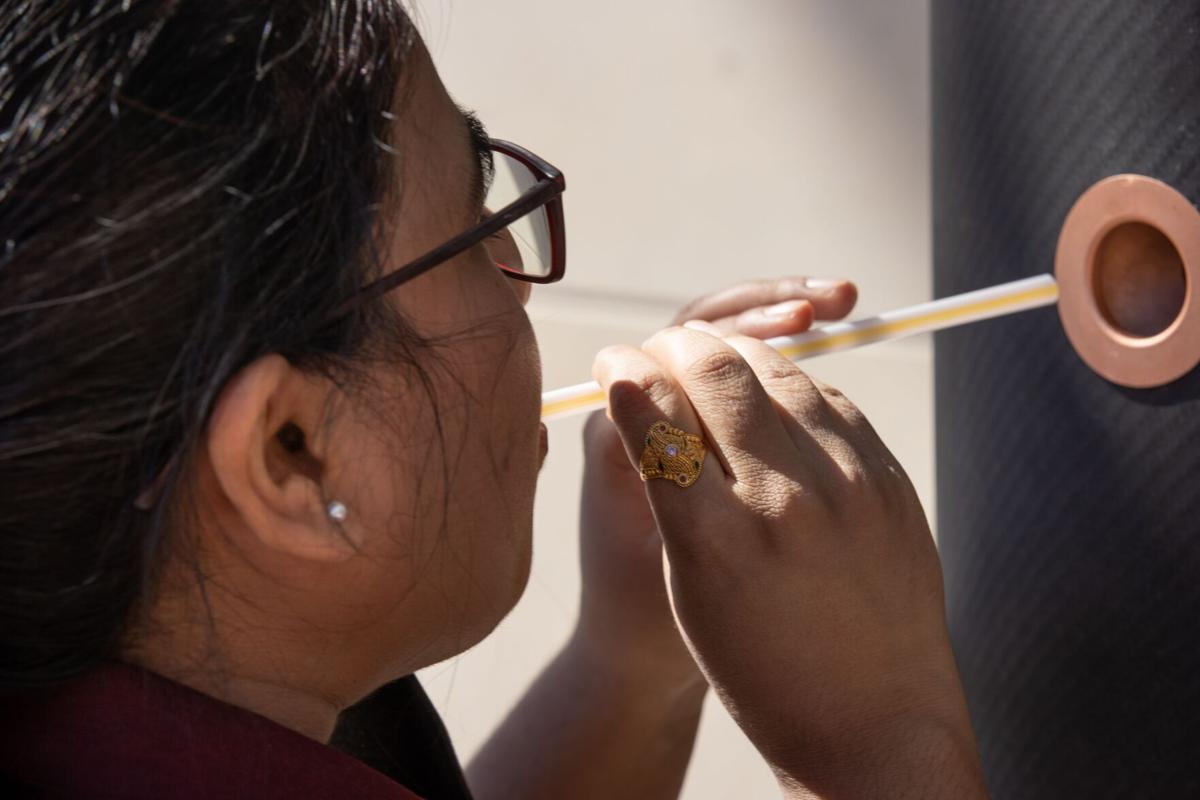 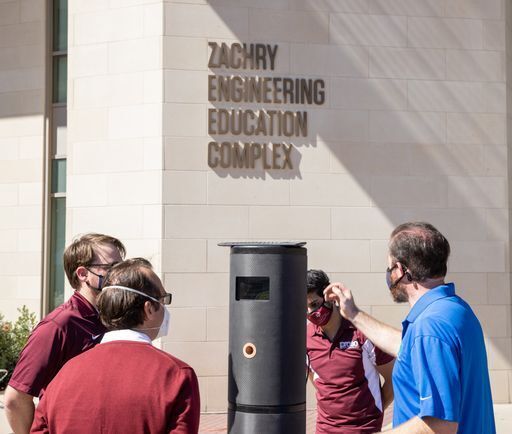 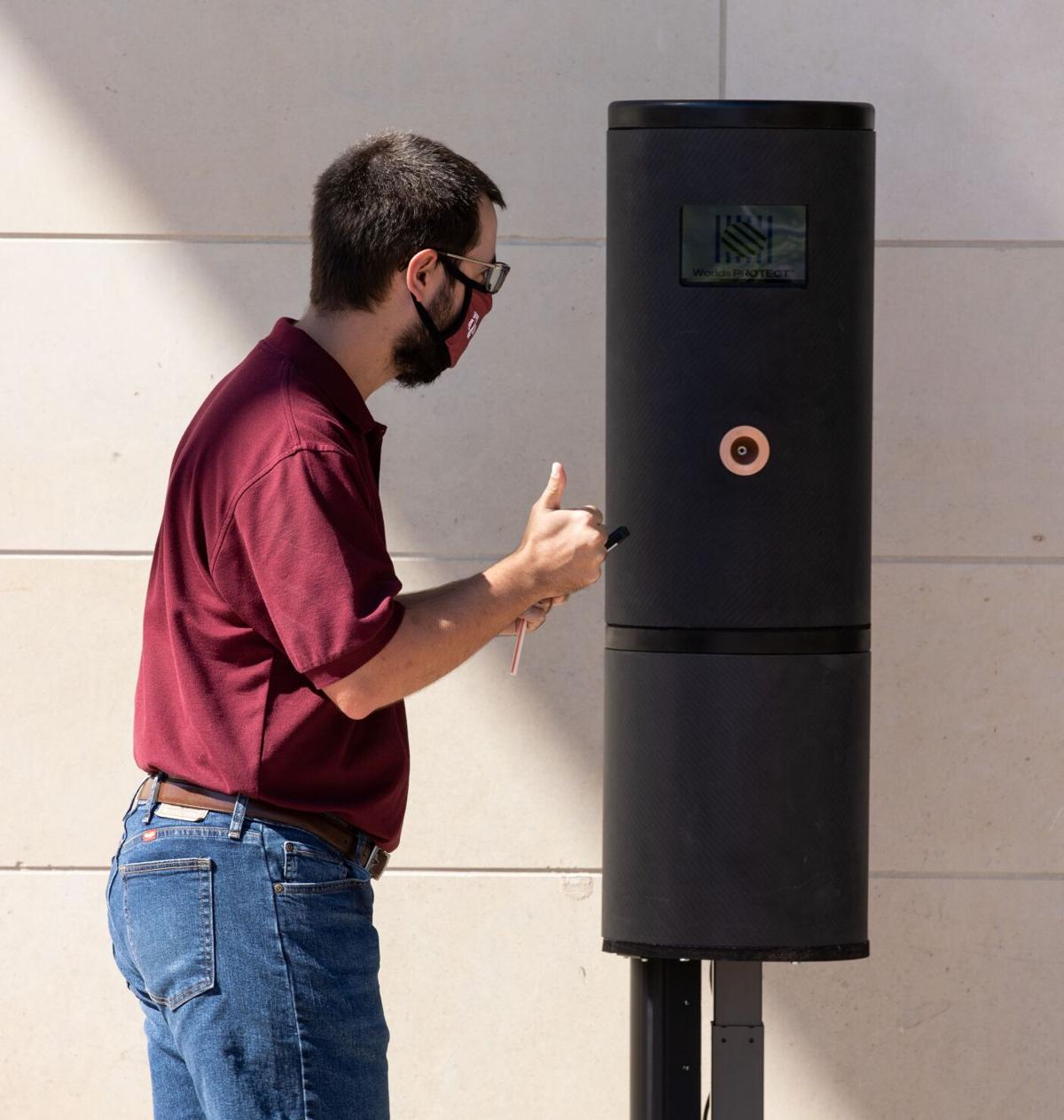 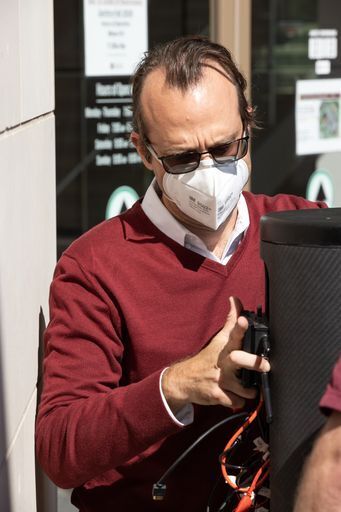 Beginning today, Aggies can be a part of an effort aimed at making COVID-19 testing simpler and faster.

One COVID-19 breath testing device was on campus Thursday and will be joined by a second one today. The gray, cylindrical machines that can stand a bit taller than the average person are being placed near some of the existing campus testing locations. Students taking a traditional COVID-19 test can also opt to use what is being called the “Worlds Protect” prototype kiosk, which uses artificial intelligence and a person’s breath to test for the virus. Users can blow into a copper inlet with a disposable straw and a result will be determined in under a minute.

Both test results will be compared to each other so the prototype creators can collect data on how accurate the new product is. By the end of the year, five total kiosks will be set up at A&M System sites.

Worlds Inc. co-founders Dave Copps and Chris Rohde got the project started in March and are collaborating with the U.S. Air Force and Texas A&M University System to develop and test the kiosk.

“It really is critical that we find a way to test people rapidly, accurately and at a cost that can be affordable so large organizations can take advantage of this technology,” said Copps, CEO of Worlds Inc., a Dallas-based AI software company. “This is something that will be great for our country and we are humbled to be a part of it and be the people who are pushing it to market.”

In addition to opening A&M’s flagship campus up for the prototype to be tried out, the A&M System has invested $1 million in the project’s development. A&M is helping Worlds Inc. leaders with engineering and design, prototype building and the mapping of a commercial manufacturing process, according to a system press release.

Rob Gorham, executive director of SecureAmerica Institute, said A&M’s goal is to bridge the gap between prototyping and getting the product to the next step. The institute is headquartered on the RELLIS Campus in Bryan and was opened to assist with high-tech manufacturing.

Gorham said he sees the breath test as a product that could be used to ensure environments are free of COVID-19 within a matter of minutes, opening the door for places to sometimes relax their safety precautions so that some gatherings can resemble times before the pandemic.

“It’s going to bring humanity back in a very complex and complicated environment of this global pandemic that we’re all having to face and deal with,” he said.

When a person breathes into the device, the machine examines the sample for the specific “volatile organic compounds” that a person’s body creates when someone is fighting off the virus, the press release explains. The test is completed by using advanced mass spectrometry technology, a chemical analysis that the release says is made smarter by AI. Worlds Inc. uses AI software to map the chemical code of a body reacting to the infection.

The copper inlet and some interior elements are sanitized by heating up between each test so that results are not contaminated by previous users.

Results from the approximately 800 people who have been tested with Worlds Protect at Wright-Patterson Air Force Base in Ohio, Brigham Young University and other locations across Texas show that the prototype has an accuracy similar to polymerase chain reaction (PCR) tests. The PCR tests are often a nose swab and are considered some of the most accurate COVID-19 tests on the market.

Guido Verbeck, a doctoral graduate of Texas A&M, has been working with the Worlds Inc. co-founders since the team thought up the idea for this technology in March.

Verbeck, a University of North Texas chemistry professor, is known for coming up with new uses of mass spectrometry. The Royal Society of Chemistry recently published Verbeck’s peer-reviewed research on using mass spectrometry to detect COVID-19.

David Staack, associate professor of mechanical engineering at A&M, is responsible for creating the breath-capture system for the prototypes.

More prototypes, made possible by SecureAmerica, will soon be available for demonstration at U.S. Air Force bases and other Department of Defense locations such as Lackland Air Force Base in San Antonio. Testing at these locations could help screen hundreds of airmen every week when they come in for basic training. Col. Charles Bris-Bois, leader of the Air Force Disruptive Technology Team at the Pentagon, will coordinate the screening in Texas.

Copps and Rohde, president of Worlds Inc., are working with the Food and Drug Administration to obtain Emergency Use Authorization that the release says could eventually allow Worlds Protect to be an alternative to PCR tests.  The two said there is no solid timeframe on when approval may be finalized.

If approved by the FDA, dozens of kiosks could then be manufactured by March. Around this time, the prototypes that are being used at A&M could be replaced with several of the actual kiosks.

Eventually, Copps and Rohde said they want the device to be used worldwide in places like factories, schools, military bases or other locations where large-scale virus screening is needed. Early projections estimate that each test could cost about 50 cents with the kiosk, with companies leasing the machines for about $5,000 per month.

They said there are a couple of other places looking at COVID-19 tests that use breath, but none to their knowledge that are as far along as Worlds Protect or that use AI.

The software used in the prototype could also be engineered to detect other health problems, including future pandemics and bioterrorism threats, according to the release.

“We just want people to be able to go back to work, go back to school and feel safe,” Rohde said.

Some families are planning gatherings as usual, and others are holding modified, outdoor Thanksgiving dinners with fewer guests. Still others are canceling events entirely, choosing to eat only with those in their immediate household, and socialize online with extended family members and friends.

Nov. 24, 1965: Johnny Cash performed at the Lakeview Amusement Club in Bryan. He was originally set to perform on the Texas A&M campus for…

Andy Duffie, a College Station resident and a member of Texas A&M's Class of 1978 who founded the Aggie Century Tree Project, died on Sunday at age 64.

The show will be followed by a broadcast of the 2019 performance of The Nutcracker by Ballet Brazos.

State climatologist and Texas A&M University professor John Nielsen-Gammon told The Eagle on Thursday that conditions have been deteriorating in Texas “for the past several months,” with areas between San Antonio and Laredo experiencing particularly tough drought conditions.

Remembering the 12: Aggie family gathers for solemn tribute to those who died in Bonfire collapse

Members of the Texas A&M and Bryan-College Station communities gather each year in the early morning hours to honor the 12 Aggies who were killed when the Bonfire collapsed Nov. 18, 1999, at 2:42 a.m. while under construction.