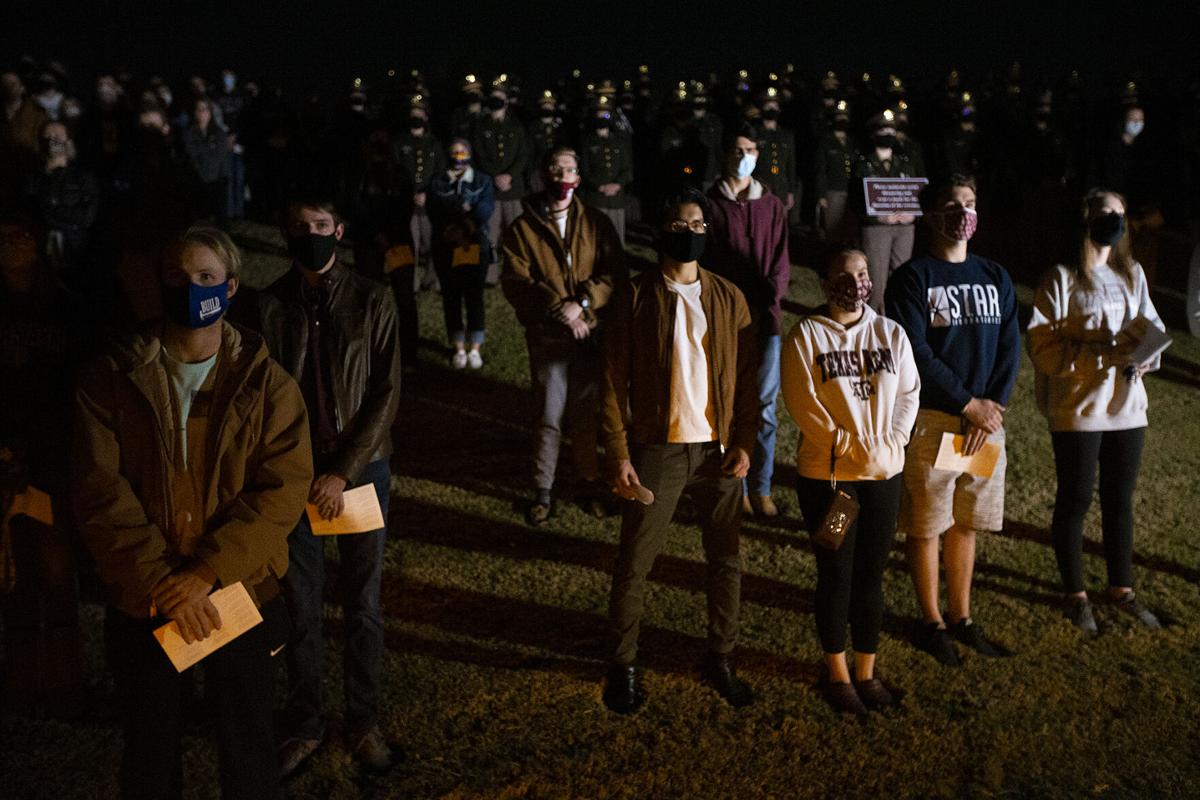 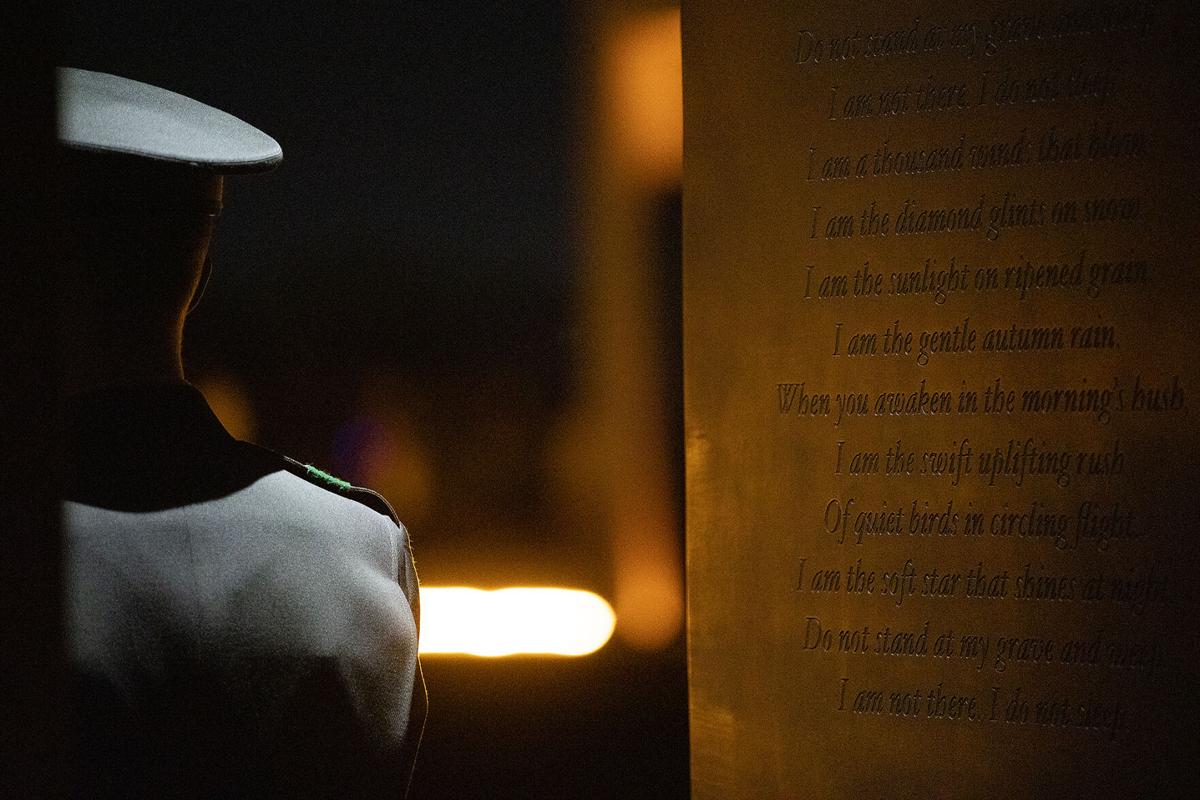 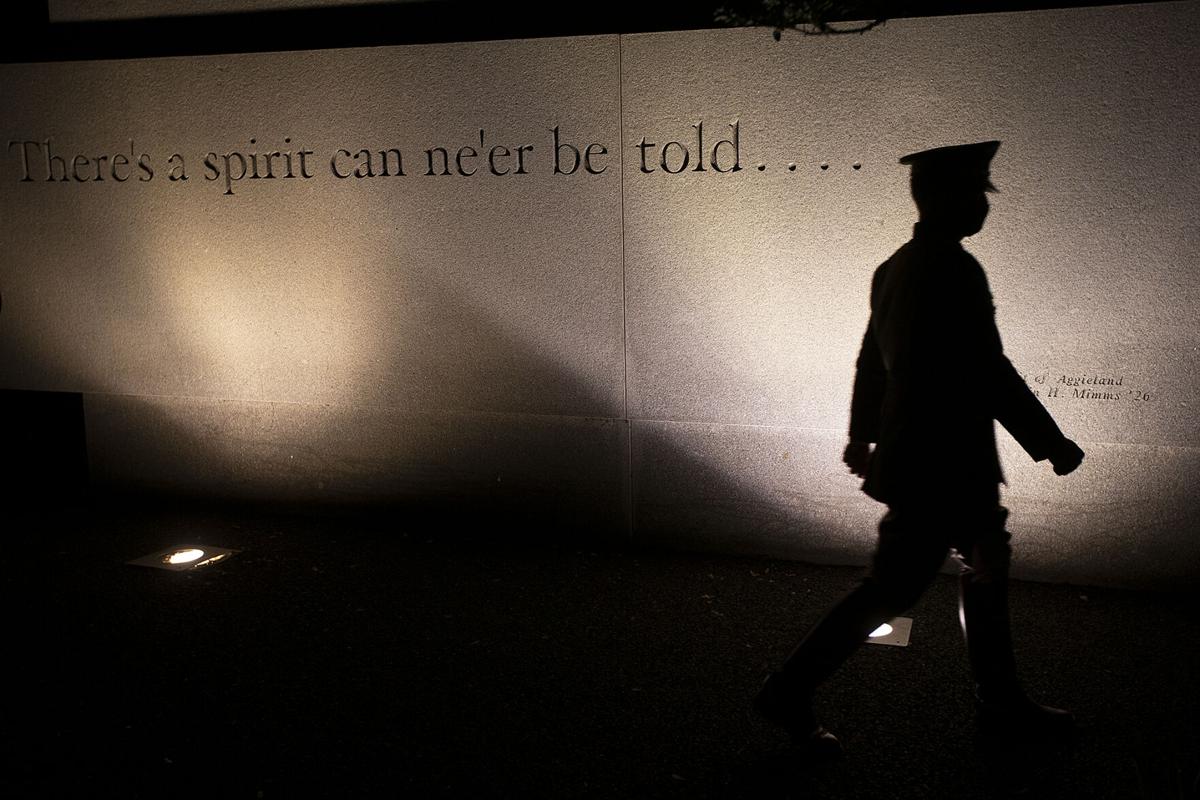 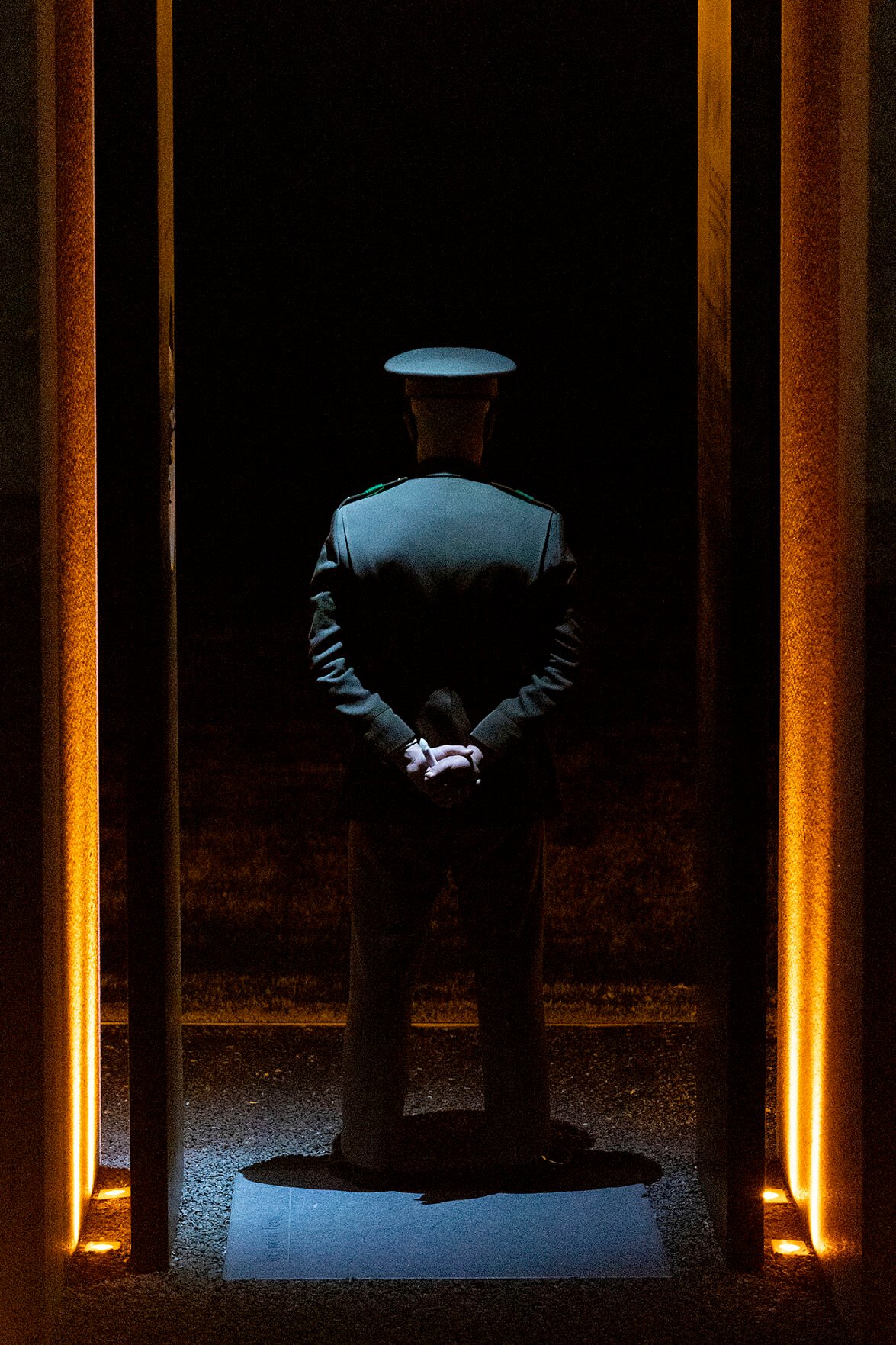 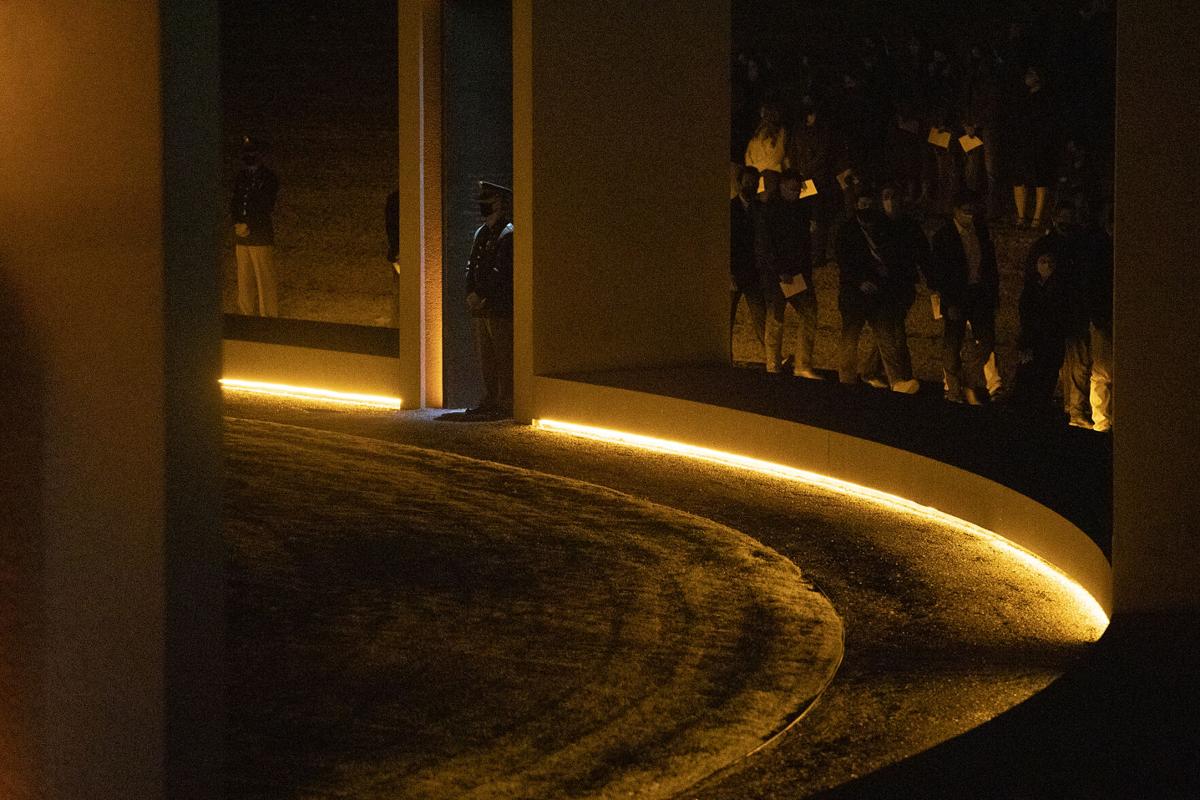 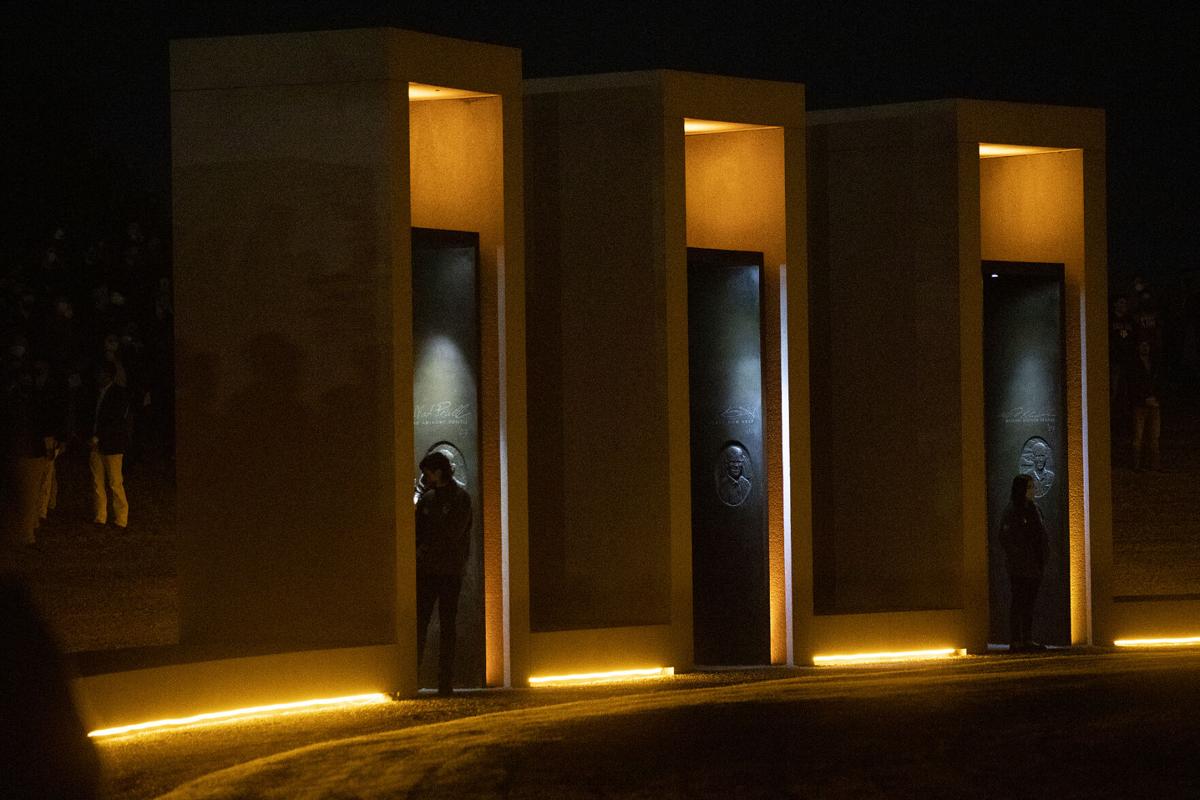 Members of the Texas A&M and Bryan-College Station communities gather each year in the early morning hours to honor the 12 Aggies who were killed when the Bonfire collapsed Nov. 18, 1999, at 2:42 a.m. while under construction.

Approximately two dozen family members of those who died sat inside the Spirit Ring as three A&M yell leaders presided over the remembrance. In unison, the crowd softly sang The Spirit of Aggieland and the first verse of Amazing Grace. The program began promptly at 2:42 a.m. and formally lasted less than 15 minutes, though hundreds arrived early and stood in silence.

Members of the university's Corps of Cadets stood around the perimeter of the Bonfire Memorial's Spirit Ring.

Following the ceremony, Jerry Ebanks, father of the late Michael Stephen Ebanks, and John Comstock, who was the last survivor pulled from the wreckage, spoke just outside the portal honoring Michael, who died at age 19.

“It amazed me and it was heartwarming,” Jerry Ebanks said of the large turnout as he held flowers and looked slowly around at the hundreds still gathered in near-silence. “Many of us were wondering if there would be as big of a crowd because of the virus. We know the answer to that question now.”

Toni Eubanks, who was a friend of Michael’s, joined Ebanks and Comstock next to the portal.

Michael had been at A&M for less than three months when he died. Asked what she was thinking about on the 21st anniversary of the tragedy, Eubanks noted that Michael’s 40th birthday was last month.

“The big milestones make you think back a lot,” she said.

Students from the Texas A&M Traditions Council’s Bonfire Remembrance Committee put several COVID-19 precautions in place; students and staff worked together to make a livestream link available for those who wanted to participate virtually, and several hundred people had viewed the link by 5:15 a.m. Wednesday.

“It was different, and very beautiful, still,” Eubanks said of the remembrance. “I’m so impressed that it’s 21 years later, and a lot of these students weren’t even born then. They still come out in the middle of the night, respectfully social-distanced this year, and it’s just — it’s heartwarming.”

The remembrance ceremony also included a reading of the poem A Litany of Remembrance by rabbis Sylvan Kamens and Jack Riemer and a reading of The Last Corps Trip, written by Philo H. Duval Jr., a member of the Texas A&M Class of 1951.

With those assembled responding "here" after each name, yell leaders took turns reciting the names of the 11 students and one former student who died 21 years ago:

“The Aggie family is unique in that it transcends time,” one yell leader said to those assembled. “This morning, we stand to honor 12 members of our Aggie family. May we never forget them and the legacy they left on this university.”

At 3:26 a.m., after most of those assembled had returned to their cars or walked back to their residence halls, small groups of students, former students and other individuals knelt inside portals and quietly uttered prayers for those who died 21 years ago, and for their families.

One of those moving reverently around the Spirit Ring from portal to portal was Texas A&M sophomore Katie Hayes. Hayes said that her sister, also an Aggie, is three years older than her and brought her to the memorial when Hayes was a 15-year-old high school student.

“The first thing I did was read every single inscription and biography — I spent an hour out here and my family said it was time to go, but there was something pulling me to read about each person who died. That was my first glimpse of the spirit of Aggieland,” Hayes said. “Personally, I am strong in my faith, and so many of them loved Jesus, served God and led Bible studies.”

Hayes, who is from Kaufman, said that she particularly remembered reading the information in the portal honoring Timothy Kerlee and said she felt deeply moved, and pulled to be part of the Texas A&M community.

“When it says that he wouldn’t let anyone rescue him until he helped his buddies first, I asked what kind of passionate love must you have for your friends. And the answer is found in the school and this community,” Hayes said.

“Even with COVID, so many people were willing to come out here at two in the morning and remember them,” Hayes said, emotion filling her voice and eyes. “If love could be a place, this would be it.”

Members of the Bryan-College Station community, as well as current and former Texas A&M students in and beyond the Brazos Valley, posted about Bonfire on social media Tuesday evening and into Wednesday morning. Col. Michael Fossum, chief operating officer and vice president of Texas A&M University at Galveston, posted photos on Twitter early Wednesday of dozens gathered in Galveston for a remembrance.

Some families are planning gatherings as usual, and others are holding modified, outdoor Thanksgiving dinners with fewer guests. Still others are canceling events entirely, choosing to eat only with those in their immediate household, and socialize online with extended family members and friends.

Nov. 24, 1965: Johnny Cash performed at the Lakeview Amusement Club in Bryan. He was originally set to perform on the Texas A&M campus for…

The show will be followed by a broadcast of the 2019 performance of The Nutcracker by Ballet Brazos.

Nov. 25, 1999: A candlelight vigil was held at the site of the Bonfire collapse, the night the Bonfire would have burned. At Yell Practice in …

After being forced to cancel the 2020 Big Event due to the novel coronavirus, organizers expressed excitement this week that the largest one-day student service project in the United States will return March 27.

Junkins said that once a permanent president is named — “hopefully by June,” he wrote — he wants to return to his current roles as Distinguished Professor of Aerospace Engineering, holder of the Royce E. Wisenbaker Chair in Innovation in the College of Engineering, and founding director of the Hagler Institute of Advanced Study.

The gray, cylindrical machines that can stand a bit taller than the average person are being placed near some of the existing campus testing locations.