This story is part of a series remembering those affected by the Bonfire collapse on the Texas A&M campus on Nov. 18, 1999. Twelve Aggies were killed and 27 were injured.

It’s been two decades since the 19-year-old environmental design freshman, who aspired to study graphic design, died in the Aggie Bonfire collapse.

For Neva, even the happiest family occasions continue to be affected by Jamie’s absence. Not long after Jamie died, her youngest sister graduated from high school and her oldest sister had her second child. Neva said it hurts to see Jamie missing from photos of such important occasions.

“If you’ve never lost a child, there is no way you can understand what grief is like,” Neva said.

It was the biggest challenge the family has faced, but Larry said moving forward was critical. Their youngest daughter, Kristen Smith, was still in high school. Their oldest, Shelley Mraz, and second-oldest, Melissa Hand, still needed them, too.

The family’s Christian faith continues to play a major role in coping with Jamie’s passing, Larry said. Connecting with other people in the same situation has also been helpful. Kenny and Carolyn Adams know their struggles. Their daughter, Miranda Denise Adams, was the other female student to die in the Bonfire collapse.

For many years after the tragedy, the two couples went to Aggie football games together. Neva said part of the motivation was to have an excuse to be in College Station to check on Smith, who was attending Texas A&M, but it was also comforting to be around parents who understood their pain.

“It was therapy,” Neva said. “Sitting next to them during the games, knowing that you’ve got someone sitting right next to you who understands completely how you feel about everything.”

The Hands also found comfort in the friendship they found in Jerry and Bulinda Ebanks, who lost their son Michael Stephen Ebanks in the collapse.

The annual Bonfire Remembrance ceremony on Nov. 18 has been an additional way to cope. They are able to see students — many of whom weren’t born before the tragedy — who want to remember their daughter and the others who died. Larry and Neva said it is a touching experience that they have witnessed every year except for one since the Bonfire Memorial opened in 2004.

“One of the things we heard most often after the stack fell is, ‘We will never forget,’” Neva said. “It means a great deal to us that [the ceremony] happens every year, and sure enough, people don’t forget.”

Smith said she has been to several of the ceremonies, and that she appreciates the annual tribute.

“I always like to see the people who go out to honor the 12 fallen and see the community and camaraderie between everybody,” Smith said. “They take it seriously and are very respectful. It just warms my heart that all these Aggies are still coming out to show their support and respect to those who fell on Bonfire.”

The Hand family members have honored Jamie in their own ways. Most of her belongings remain in Larry and Neva’s home in Henderson, but the other three daughters have meaningful items as well.

Smith named her first daughter after Jamie. She said she is grateful to Jamie’s friends, who immediately embraced her as part of their group when she started attending A&M and became her support system away from home.

Jamie was outgoing, friendly and a perfectionist, Smith said. Some of Jamie’s art hangs in her house as a reminder of their relationship and the adventures they shared.

Some of those adventures are even carved into Jamie’s portal at the Bonfire Memorial, from rollerblading with no brakes to swimming in ponds late at night by the headlights of a truck.

“She had a laugh that was contagious,” Mraz said. “It was just a little giggle and a rumbling, and it made everyone want to smile and laugh with her.”

Mraz lives in Tyler, and said the last time she saw Jamie was when they were both in College Station for a football game. They had dinner together, and Mraz remembers their hug goodbye.

Jamie’s birthday is a particularly difficult time, Larry and Neva said. Every year, Neva wears a necklace with Jamie’s name on it — a gift from Carolyn Adams — and they take flowers to Jamie’s gravesite in Henderson.

The Hands said they want to see Jamie’s personality traits of friendliness, commitment and an outgoing spirit present in future A&M students. To ensure this, the couple started a scholarship in Jamie’s name. Each year, it is awarded to one high school student from Henderson.

“We’re in on selecting the recipient, and we try to make it someone who is much like Jamie,” Neva said. “Someone involved. Someone who wants to serve.” 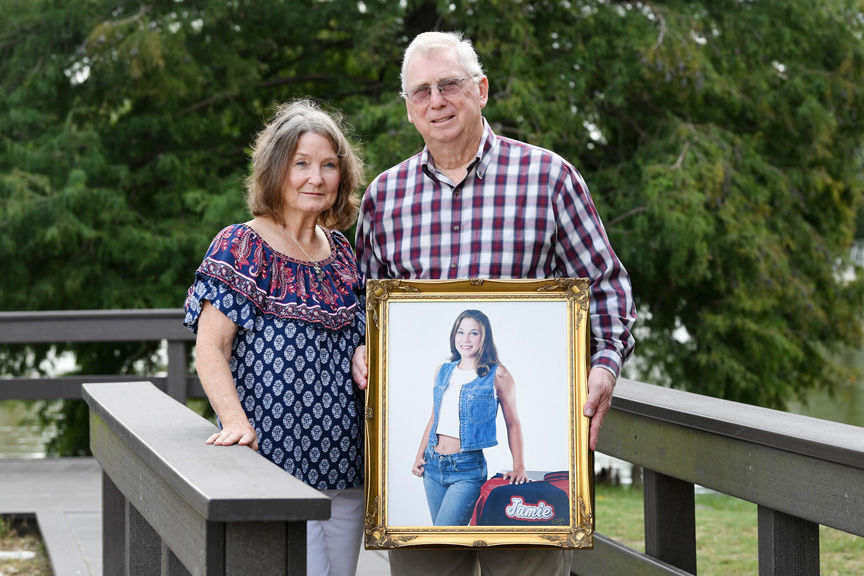 Neva and Larry Hand pose at Stephen C. Beachy Central Park with a photo of their daughter, Jamie Lynn. The freshman environmental design major  was one of 12 Aggies killed when Bonfire fell in 1999. Read more about the Hand family here and read other stories in the Remembering Bonfire series here. 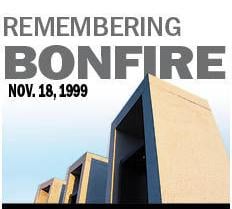