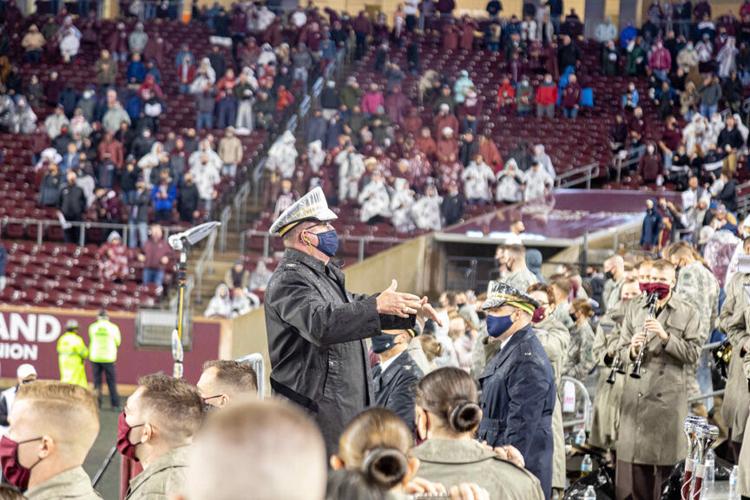 Col. Jay Brewer is retiring as the Fightin’ Texas Aggie Band’s senior associate director in the spring, and his final day will be the Corps of Cadets’ Final Review. 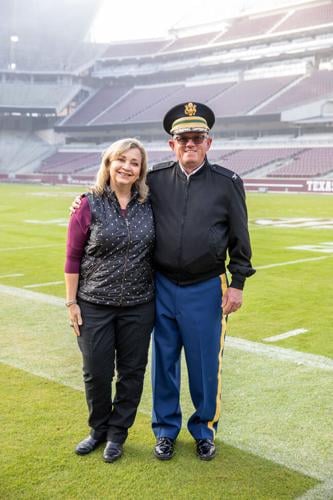 Col. Jay Brewer poses at Kyle Field with his wife, Judy. Since 1981, Brewer said he hasn’t missed a game at Kyle Field, only a couple of road games. 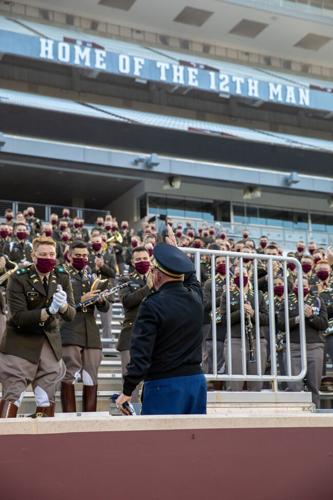 Col. Jay Brewer addresses the Fightin’ Texas Aggie Band. The “Now forming ...” phrase wasn’t coined by Brewer, but he kept it as he began announcing the band’s halftime drills, making a point to emphasize the entrance. 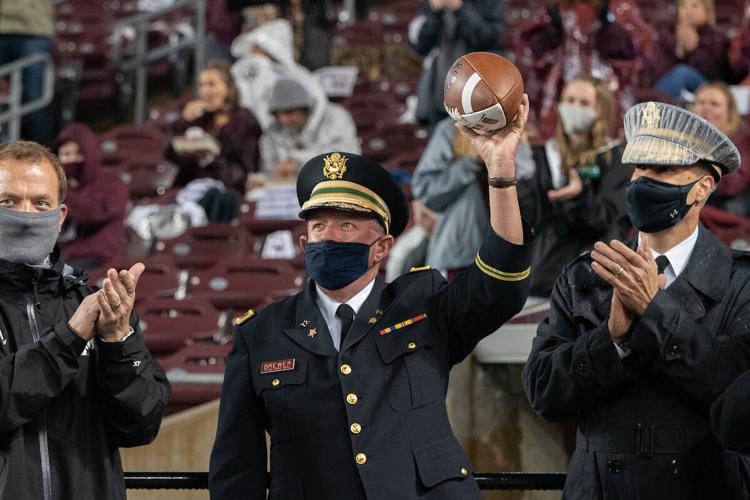 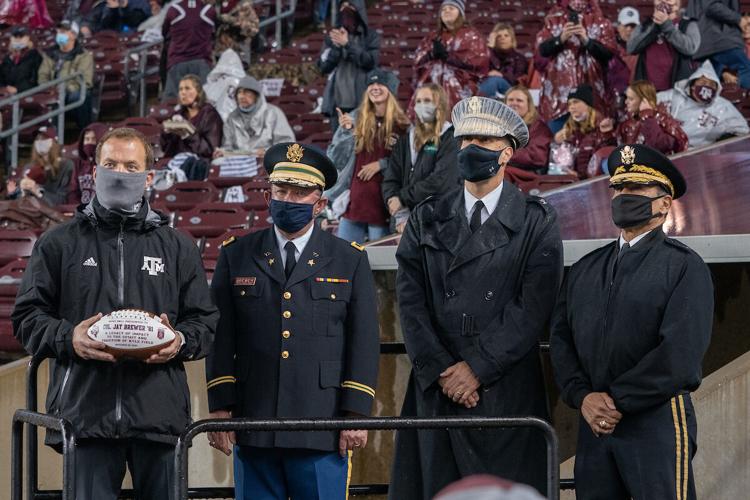 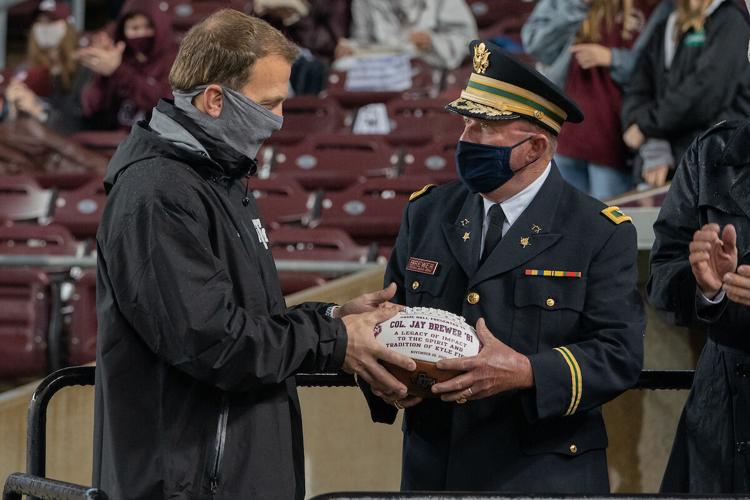 For the past 40 years, Col. Jay Brewer has voiced the iconic words that signify the start of the Fightin’ Texas Aggie Band’s halftime drills on Saturdays in the fall.

This fall was Brewer’s final season as the band’s announcer. He’s retiring as the band’s senior associate director in the spring, and his final day will be the Corps of Cadets’ Final Review.

“It’s been such an honor to wear that uniform over the last 40 years,” Brewer said. “Frankly, in honor of all of the Texas Aggies, and others, who went and served our country, some who gave their lives for our country so that we can have the Texas Aggie Band on this campus.”

Timothy Rhea, A&M’s director of bands and music activities, said no one loves the band more than Brewer.

“For 40 years, he’s been such an integral part of it,” he said. “He’s kind of carved out a very unique position for what’s he’s done, and we’re going to miss him very much when he’s no longer here.”

Growing up in Channelview, Brewer began playing trombone when he was 10 years old. In high school, he went back and forth about going to college. Most of his friends didn’t go, he said, instead opting to work on the Houston Ship Channel. Brewer finally decided to attend A&M, and he joined the band as a trombone player in 1977.

A family connection helped. When Brewer’s father, a Bryan native, was in high school, he was playing a pickup football game at the former Stephen F. Austin High School when a man in a black suit and fedora got out of his car and motioned for the boys to come meet him at the fence. The man was A&M football coach Homer Norton.

Norton asked the boys if they had considered going to college. Brewer’s father told him no, because his mother was a widow with five children and little money.

Brewer’s father joined the football team in the fall of 1939, the same year A&M won its lone consensus national title on the gridiron. His father played on the freshman team that season and also played in 1940. He graduated in 1943.

At the final A&M football game this season, Brewer was honored with his family in attendance on a platform near the band. A&M athletic director Ross Bjork gave him a game ball with his name on it.

“I told Ross, ‘This is kind of circle completed, because had not Aggie football had everything to do with why my daddy got to come to this school, I wouldn’t be standing here today,’” Brewer said. “This football will stay in the Brewer family forever.”

“It’s challenging, it’s emotional, it’s memorable,” he said. “You’ll have lifelong friends because of what you endure to be a part of this band.”

One of those friends was Brig. Gen. Joe Ramirez, who is commandant of the Corps of Cadets. The two were in B-Company, and Ramirez, who played alto saxophone, served as Brewer’s first sergeant.

On graduation day in 1981, Brewer was ready to accept his degree in mechanized agriculture and soon start a job with John Deere. But he got a call from Col. Joe T. Haney, who was the Aggie Band director, saying Maj. Joe McMullen was leaving the band staff and he needed someone to help him run the band. Brewer told his parents, and recalled his father being furious.

“He looked at me and said, ‘Well, you’ve never listened to me before, I don’t know why you should start now,’” Brewer said. “So I told Col. Haney and I stayed. Why me? I don’t know. I was not a commanding officer, I was not a drum major, I was not on the bugle rank, and I wasn’t qualified to be in the Ross Volunteers. I was just a line senior.”

Brewer took classes at Sam Houston State, then later earned a master of music education degree from VanderCook College of Music in Chicago.

“I had no idea then that my job would last that long,” Brewer said. “I had no idea I would be able to advance as far as I have over the last 40 years.”

The voice of the Aggie Band

The famous “Now forming ...” phrase wasn’t coined by Brewer, but he kept it as he began announcing the band’s halftime drills, making a point to emphasize the entrance.

“It announces to the world, to the people there in attendance, that something special’s about to happen,” Brewer said. “You might want to take a look, and they do and it does.”

Many in the Kyle Field stands recite the words with Brewer, which Ramirez said wasn’t the case when he marched as a student.

Brewer and the other band directors write the halftime drills and run the rehearsals, which allows him to describe different formations to the crowd. Brewer’s duties also include counseling band cadets, along with instrument maintenance, repairs and inventory.

“He has impacted the lives of thousands of young men and women who marched with the Aggie Band over the 40-plus years that he was the associate director,” Ramirez said. “Jay Brewer was the one who dealt almost directly on a daily basis with those cadets on both good issues and not-so-good issues. He left an indelible mark on all of them.”

Brewer said Aggie Band directors serve in the Texas State Guard, and that’s where the military-rank titles come from. He said he was placed in the honorary reserves for life when he retired from the state guard in 2017.

Since 1981, Brewer said he hasn’t missed a game at Kyle Field, only a couple of road games.

Countless memories come to mind for Brewer over his career.

One of the darkest days in Aggieland became one of the brightest days at Kyle Field, he said, after the 1999 Bonfire collapse tragedy that killed 12 Aggies and injured 27. Two moments from halftime during the A&M-Texas game that followed have stuck with Brewer: the University of Texas band playing Amazing Grace and the Aggie Band’s silent exit off the field in the Block T formation.

“It was so silent, and of course the Aggies won the game; they had to win the game,” Brewer said. “That was the best day at Kyle Field we ever had, and we ever will have.”

The band marched in the snow during the 2000 Independence Bowl, with hash marks and yard lines hidden beneath it. Brewer said he decided at the last second to change the original drill into a simpler, shorter one. As the band members stood on the field about to start the performance, Brewer informed them of the change through the stadium PA system, with a crowd of 36,974 hearing it all.

“That was the craziest frickin’ thing we’ve ever done,” Brewer said. “Was it perfect? No, but the snow was about 3 inches thick on that field. But the formation that was made with them clomping through that snow was awesome-looking.”

As with most things in 2020, Brewer’s final football season with the Aggie Band had several twists.

Due to COVID-19 restrictions, the band was unable to perform on Kyle Field during halftime. Instead, recorded performances were shown on the stadium’s video boards at halftime.

Brewer lost hearing in his left ear in August due to a medical issue. Although he’s been able to regain some hearing and now uses hearing aids, he couldn’t be in front of the band full-time because of the volume.

“I was kind of upset about that because we’re a team here,” Brewer said. “Tim and Russell [Tipton, associate director of bands] took up the slack, I did my part, and the band never missed a beat.”

During practices, Brewer said he walked around the perimeter and stood in the tower on the band’s practice field.

“It was very different,” Rhea said, “and while we certainly missed him, I think it helped us in a transition as well so that when he’s not around next year it won’t be quite as difficult.”

Because of his ear troubles, Brewer only attended two A&M games this season. During the LSU game, Rhea asked Brewer to conduct the band for The Spirit of Aggieland.

“I think it was a really great way for him to be in front of the band for the last time in a public setting like the football game,” Rhea said.

“That wasn’t easy to get through this time, but I did,” Brewer said.

“That,” he reflected, “was the hardest part.”

Life after the band

Ramirez noted it would be different to not hear Brewer’s booming voice when the Noble Men of Kyle assemble in the north end of the stadium.

“Anytime any iconic figure leaves an organization there’s a void that’s hard to fill, at least initially. I think it’s going to be a long time before people get used to the idea of Jay Brewer not being there, and that voice not coming across through the loud speaker at Kyle Field,” Ramirez said. “There is no way you can replace Jay Brewer. You just can’t.”

Rhea said he’s not yet sure of announcing duties after Brewer retires, but added he’ll likely ask Brewer to record himself saying the band’s introduction.

“The Aggie Band is so traditional in how we do everything,” Rhea said. “We’re going to start in the end zone, we’re going to play marches and do this stuff, we’re going to do a ‘T’ at the end, and his voice is part of that. All of a sudden, when you start and there’s the band in the end zone and you know what you’re listening for and it doesn’t sound like that, yes, it’s very different. Same words, but just a total different way of doing it.”

As for Brewer, he said he’ll continue coming to A&M football games and enjoy the game day experience without responsibilities.

“But if I was asked by Dr. Rhea or Lt. Tipton,” Brewer said, “there’s a good chance somebody might hear, ‘Now forming at the north end of ...’ ”

Just over 300 members of the Fightin’ Texas Aggie Band performed inside Kyle Field for the first time this school year on Wednesday morning. With Col. Jay Brewer’s voice projecting out over the empty stands, the band recorded its first halftime drill in advance of Texas A&M’s Sept. 26 football home opener.

It is often described as the most important victory in Texas A&M football history, though there was no championship trophy involved or even significant bragging rights.

Col. Jay Brewer is retiring as the Fightin’ Texas Aggie Band’s senior associate director in the spring, and his final day will be the Corps of Cadets’ Final Review.

Col. Jay Brewer poses at Kyle Field with his wife, Judy. Since 1981, Brewer said he hasn’t missed a game at Kyle Field, only a couple of road games.

Col. Jay Brewer addresses the Fightin’ Texas Aggie Band. The “Now forming ...” phrase wasn’t coined by Brewer, but he kept it as he began announcing the band’s halftime drills, making a point to emphasize the entrance.