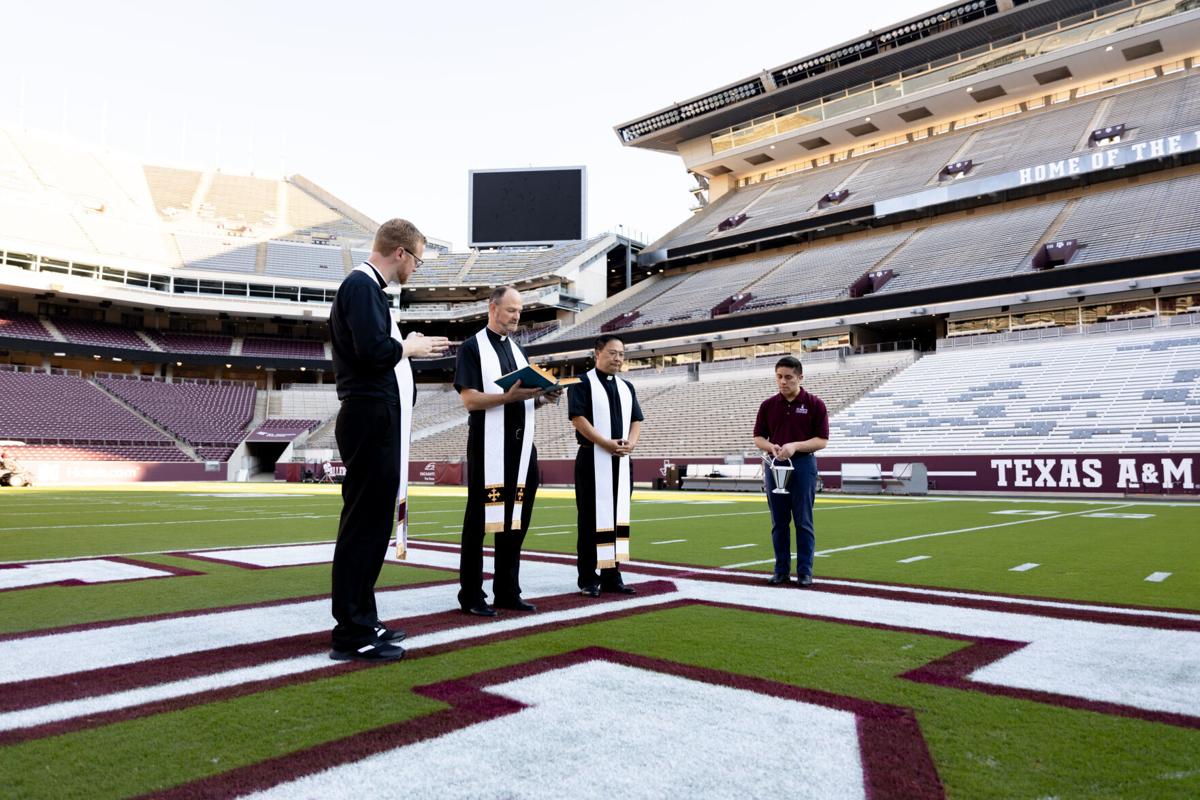 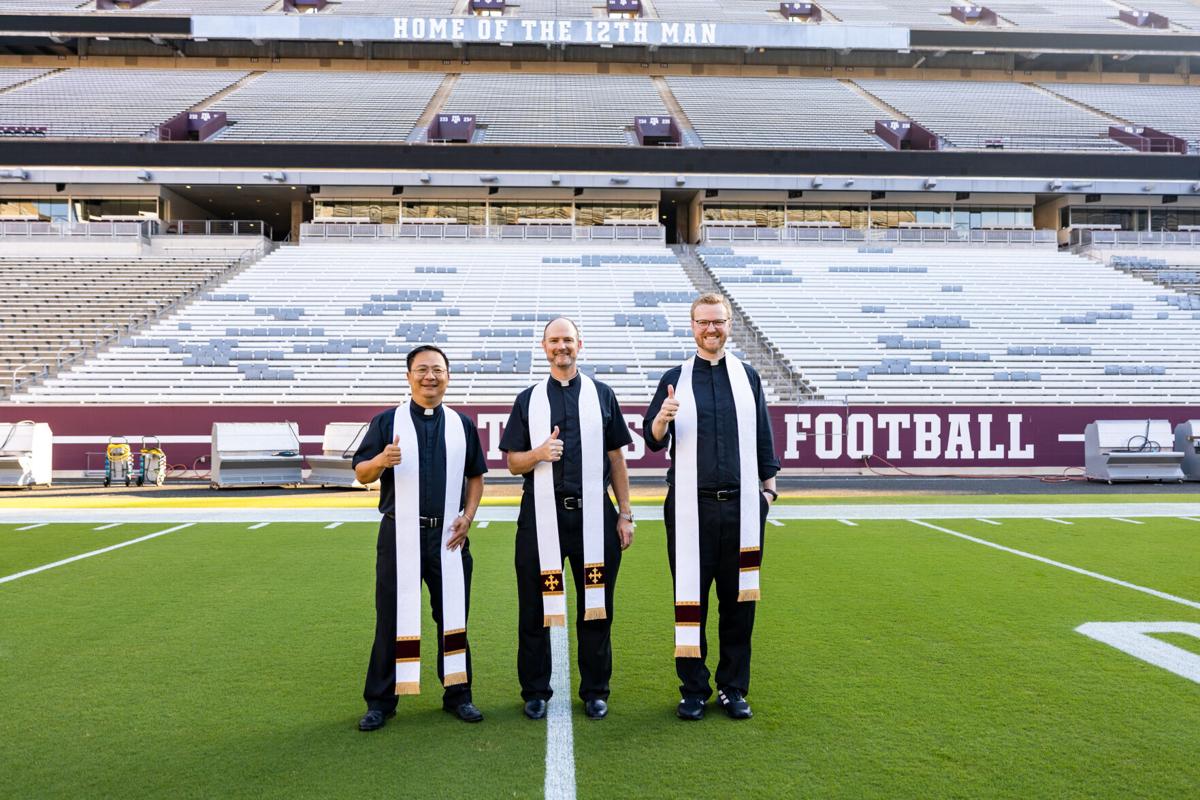 Andrew Dinh, Will Straten and Chris Smith, pastors from St. Mary’s Catholic Center in College Station, pose for a photo on Kyle Field after conducting a blessing of Kyle Field last week prior to Texas A&M’s football game against Alabama.

The initial trajectory of Texas A&M kicker Seth Small’s last-second kick Saturday was wrong. Off of his foot, the hooking bid appeared destined for a collision with the left upright, if not sailing wide of the target, until something seemingly intervened.

In the mind of Texas A&M University System Chancellor John Sharp, the mid-flight course correction that sealed the improbable — a 41-38 Aggie win over No. 1 Alabama had to have been from the divine. After all, Kyle Field had been the recipient of prayers and blessings from various clergy prior to the game, at Sharp’s behest.

“We’re pretty sure that when that field goal was veering to the left, the good Lord kind of blew a little puff on it and blew it back to the right,” Sharp said with a chuckle.

In a passing conversation a week prior with Elaine Mendoza, the former Texas A&M System Board of Regents chair told Sharp the Aggies might need help from above to end Alabama’s 19-game winning streak, Sharp said. The chancellor thought this was a great idea.

Answering Sharp’s call, three priests from St. Mary’s Catholic Center — a block north of A&M’s campus — blessed Kyle Field using a liturgy from the Catholic Book of Blessings and holy water. It was a request Sharp had previously made of the church after the renovated Kyle Field was dedicated before the 2015 season.

The request made sense to the Rev. Chris Smith, associate pastor at St. Mary’s and a 2010 graduate of A&M. While, theologically, God may not have a stake in the outcome of the game, several of the Aggie football players are parishioners of the church, as well as three yell leaders and a large swath of the student body, he said.

The Aggie football team has struggled with injuries. Saturday, the Aggies had nine players from the season’s initial depth chart missing due to injury.

“That was our intention of going out there, just to ask God’s blessing to protect and to sanctify the stadium for the sake of the players,” Smith said.

With a hearty laugh, Sharp said his intercessory desires were a little more to the point.

“Father Will will tell you, ‘We’re just praying for the health and safety of everybody,’ but my intent wasn’t that kind. I just wanted to flat-out win,” he said.

The Rev. Will Straten, Class of 2000, led the “Order for the Blessing of a Gymnasium or a Field for Athletics” out of the Catholic Book of Blessings, alongside Smith and the Rev. Andrew Dinh. The blessing was read at midfield and was continued in a lap around the field, while holy water was sprinkled.

The liturgy calls upon the reading of 1 Corinthians 9:24-27 and various statements, including: “God has given us our physical powers in order that we may serve him joyously, help one another and, by discipline in accord with the law of God, make our body fit for every good work. God therefore approves of recreation for the relaxation of the mind and the exercises of the body. Care of the bodies foster mental well-being and we more readily establish friendly and affable relations with other people.”

The reverence of the rite also worked in conjunction with a little fun for those involved. The church created and distributed a video of the ceremony, which began by following the priests down the team’s entry tunnel into the field and ended with the trio waving 12th Man towels. The whole video contained the musical backdrop of the Fightin’ Texas Aggie Band.

“Blessing Kyle Field was a surreal experience for me,” Straten said in a statement. “Exiting the players tunnel and walking onto the empty field was epic. Praying for God to bless the team, the field, and all who enter Kyle Field was a great gift and responsibility. Many times we forget about the spiritual life that we cannot see. A blessing reminds us that there is something more than what meets the eye. Does God care about football? Maybe or maybe not, but he does care about his children and he wants to give good things to them.“

At an event prior to the game, Sharp also called on prayer of San Antonio’s Cornerstone Church founder John Hagee to bless the evening.

“At the end of the prayer, I said ‘Lord, on a personal note: When Moses led the kingdom of Israel out of Egypt’s bondage, they came across the Red Sea and they needed a miracle that you controlled the tide of the Red Sea. ... And Father, tonight, the Crimson Tide is coming to College Station and I want you to control the tide on behalf of the Texas Aggies. We need a miracle and we need it tonight. Amen,’” the pastor said.

Hagee, who attended the game, said he had never experienced a game so exciting or an atmosphere so thunderous, in what became the answer to many prayers around Aggieland.

As an A&M cliché relates, it doesn’t take much for something to become a tradition in Aggieland. Count the blessing of Kyle Field as a new addition to the list. Sharp has asked the three priests to perform the rite prior to the remaining home games this season.

And Sharp has the support of A&M head coach Jimbo Fisher, who was unaware of the blessing prior to becoming the first former Nick Saban assistant to beat the Crimson Tide head coach.

“Do it again,” he said Monday with a laugh.

Prairie View A&M is a small, historically black university with an enrollment just north of 8,000 students and located in a rural town, but the Panthers’ band – Marching Storm – is a national powerhouse that plays loud.

Hanukkah celebration: The Texas A&M Jewish community celebrated Hanukkah with an annual menorah lighting on Monday night — the second nigh…