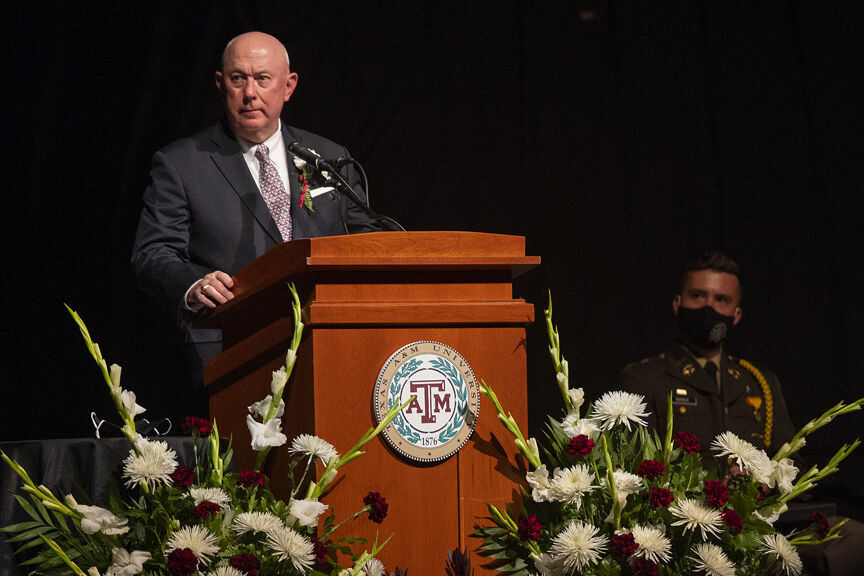 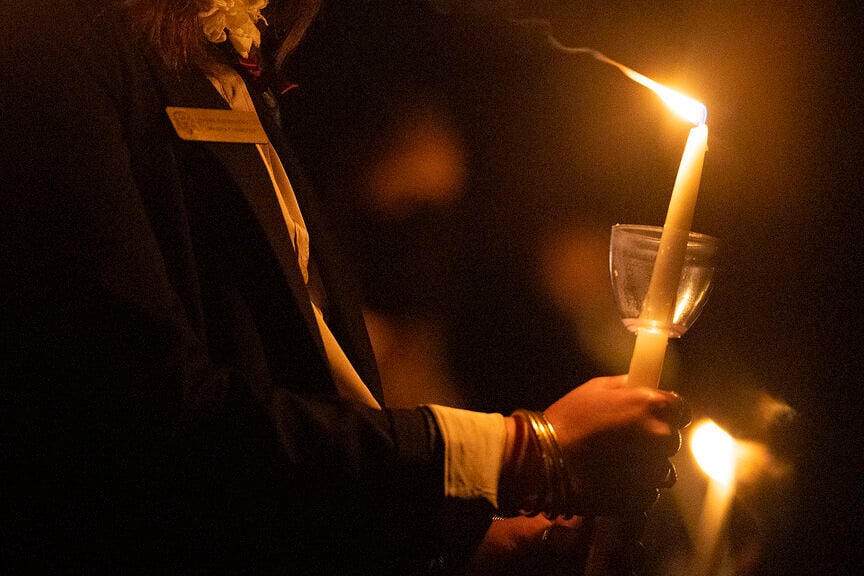 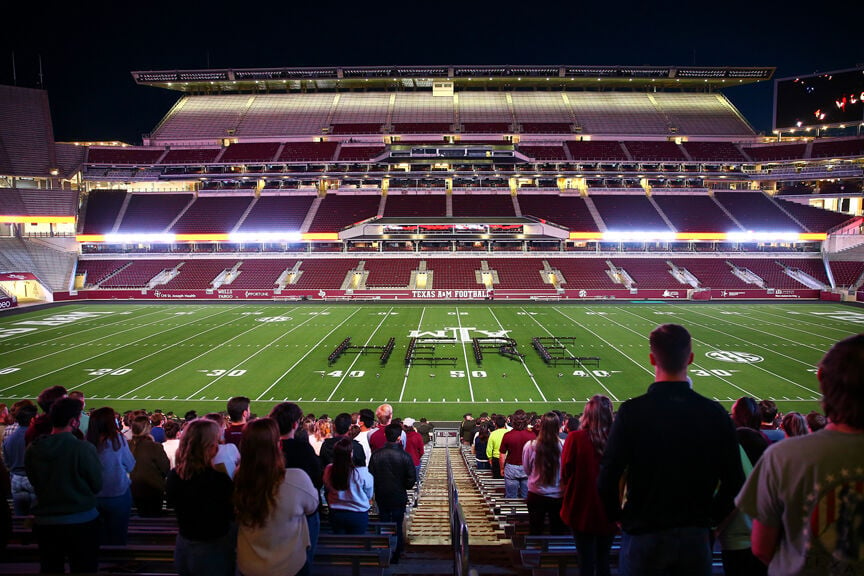 Texas A&M students and other community members who wished to attend the on-campus Muster ceremony gather Wednesday, April 21, 2021 in Kyle Field to watch a livestream of the events happening in Reed Arena. Tables were used to spell “HERE” in honor of the students and faculty who died during the past year.

For the second year in a row, Aggie Muster took on a new format as a result of the COVID-19 pandemic. But this time, rather than gathering completely virtually, thousands joined together on Texas A&M’s flagship campus as thousands more joined via a livestream.

In recent years, Reed Arena has been home to the April 21 ceremony to honor Aggies who died throughout the past year, but to prevent large crowds from gathering indoors, loved ones of the 106 people being honored this year were the main group permitted in the building. A group from the A&M class of 1971, which is celebrating its 50th reunion, was also in attendance. Hundreds were in the arena at the start of the ceremony.

Kyle Field was also opened up for thousands of community members, mostly students, to watch the livestream as a group. This isn’t the first year Muster has been held in Kyle Field; Campus Muster tweeted recently that it was held in Kyle Field in 1946, when President Dwight D. Eisenhower attended. Other locations it has been held include the lawns of the Memorial Student Center and Administration Building.

Attendee Victoria Barrera said she was glad to have a chance to honor her sister Rosa Linda Rodriguez, who died of COVID-19 last month. Rodriguez, 54, worked at the university for nearly three decades and was in the Division of Marketing & Communications at the time of her death.

“It’s like a final goodbye to that part of her life,” Barrera said of Muster. “Whereas we have other ways that we honor her with family gatherings and things of that nature and the celebration of life that we held after her passing, this is almost like a final goodbye there at the university. It’s kind of surreal but also very touching to be able to do that and for her to be included in that.”

Barrera said her sister contracted the virus when she was in a College Station hospital caring for her husband. Soon after Rodriguez went home, the virus spread to other members of the family, some who are now well and another who is still recovering.

Throughout her life, Rodriguez always prioritized family and often visited them in Houston, Barrera said.

“I think the biggest thing that she left me is a legacy of family being first,” Barrera said. “There wasn’t anything she wouldn’t do for us. I don’t know how she did so much, because in the month that she’s been gone I realized she did more than I ever thought.”

The Wednesday ceremony was Barrera’s first time attending Muster. She was accompanied by several family members.

Each year, Muster ceremonies are held around the world, and attendees call “here” for those whose names are read. People honored at the campus ceremony must meet certain criteria, such as having been a current student, faculty or staff member or member of the 50-year reunion class.

There are usually 300 Muster ceremonies held around the world. Kathryn Greenwade, vice president of communications and human resources at The Association of Former Students, said last year that number had dropped significantly but this year there were 220 ceremonies formally registered with The Association.

She said some in 2020 were canceled, while this year many are taking on different formats, whether that be in person, hybrid like the on-campus ceremony or completely virtual.

“In 2020, I think Muster provided Aggies with an opportunity to feel something normal when everything in our world was not normal,” Greenwade said. “And I think in 2021, it’s yet another reminder that regardless of what is happening around us, Muster endures and the Aggie spirit endures.”

During his keynote address to attendees, General T. Michael “Buzz” Moseley encouraged the Aggie community to make the world a better place. He told a story about Lloyd “Pete” Hughes Jr., who was the first Aggie to receive the Medal of Honor. Moseley is former chief of staff of the US Air Force.

“We need you right now,” he said. “Your community, your state, your country, your world needs you right now more than ever.”

Eric Mendoza made his final speech as student body president during the ceremony. He said that despite different formats of Aggie traditions caused by the pandemic, the spirit and meaning of them remains unchanged.

“Through the challenges of the past year we were reminded of perhaps the most important fact,” Mendoza said. “It has never been about any one of us; it’s always been about those we are honoring and the families of those we honor, just as it is this evening and just as it will be when our time comes.”

Scot Walker, assistant vice president of communications for The Association, said that toward the end of the ceremony there were 6,300 people watching on musterlive.aggienetwork.com. At that same time, he said there were more than 3,000 people who posted “here” and about 11,000 unique visitors to the site throughout the day.

Other special activities around campus marked the Muster ceremony, including a barbecue, the joining together of the class of 1971 for their 50th reunion, and a reflections display in the MSC where loved ones could place memorabilia of those who were honored. There were about 40 displays, Reflections Display Coordinator Batia Guido said.

Additionally, The Association held the fourth annual Worldwide Roll Call for the Absent, in which volunteers call the names of all 1,401 Aggies who died since the 2020 Muster, no matter which local ceremony they are honored in.

A&M junior Sarah Nippert attended Muster in Kyle Field with her dad, Grady Nippert. Her father said he made the trip from Dallas to be with Sarah during the event since he said he believes it is important to be together to celebrate good times but also for more somber events.

This was Sarah’s third time attending Muster. She said traditions like this were what drew her to Aggieland.

“I think it’s important to come and celebrate the lives of other Aggies,” she said, “because I know one day I will also be celebrated.”

Texas A&M students and other community members who wished to attend the on-campus Muster ceremony gather Wednesday, April 21, 2021 in Kyle Field to watch a livestream of the events happening in Reed Arena. Tables were used to spell “HERE” in honor of the students and faculty who died during the past year.