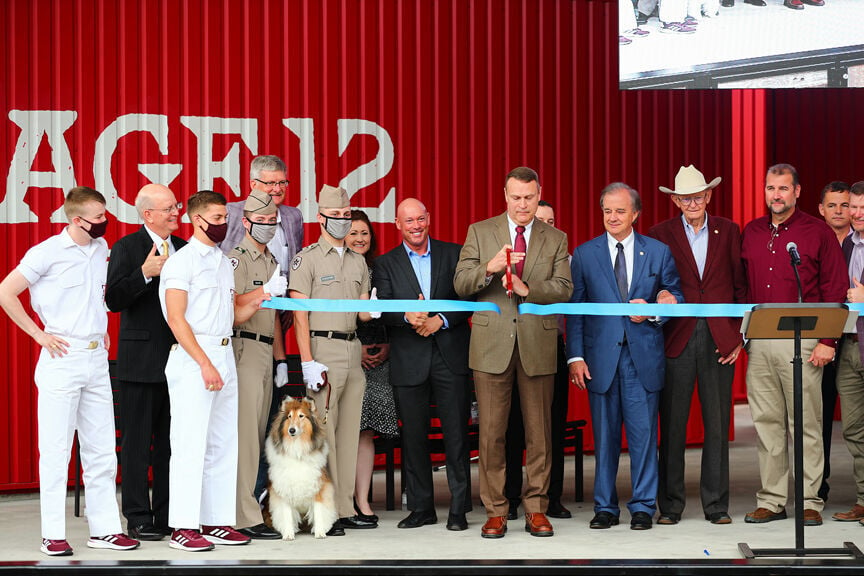 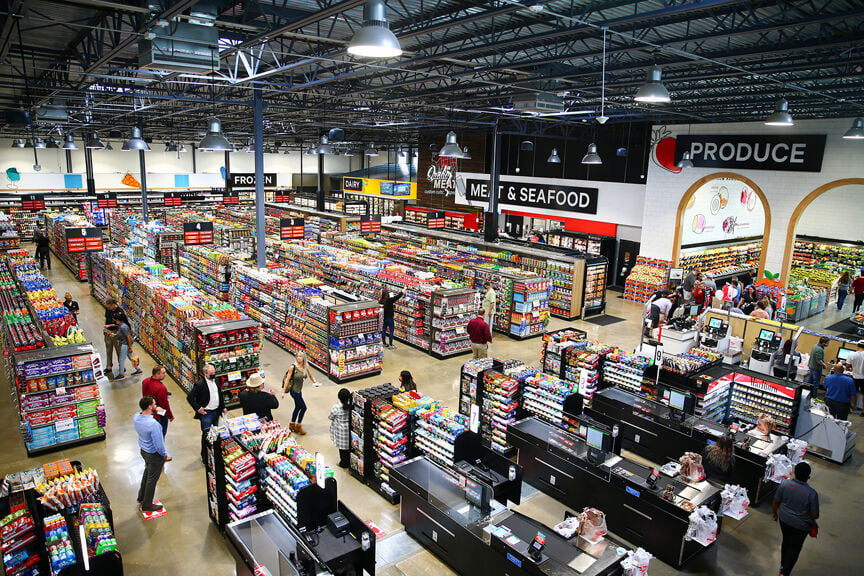 The Brookshire Brothers grand opening event on Tuesday, April 27, 2021, featured appearances from the Texas A&M University Yell Leaders, Parsons Mounted Cavalry, Reveille, the Aggie Band and the Singing Cadets. The store, located on George Bush Drive West by Park West Apartments, is across the road from Texas A&M's West Campus and will cater to students, faculty and staff.

The grand opening had a distinct Texas A&M vibe, with participants such as the Yell Leaders, the Aggie Band, the Texas A&M Singing Cadets, and  — in her last week before retirement — Reveille IX. The 40,000-square-foot store opened for business one week ago and has a second-floor balcony, space available for private events, a lounge, a full-service pharmacy and a fuel station with electric vehicle charging.

Texas A&M University System Chancellor John Sharp said the store addresses what was a gap in available food and pharmacy options on the west side of the A&M flagship campus.  He said after the ceremony that several stores bid on the chance to build in West Campus.

“When we first looked at this land, the first you find out is everything from the railroad tracks on is a food desert. We would constantly hear faculty and students talk about how much trouble it could be to get something to eat or go to the pharmacy without having to drive all over town,” Sharp said.

“Brookshire Brothers went way beyond what we imagined. This is something that all the tailgaters are going to use, and thousands of people in these apartments won’t have to go all over to get their groceries.”

The store is located at 455 George Bush Drive West in College Station, across the street from E.B. Cushing Stadium, the home of Texas A&M’s track and field teams.

John Alston, president and CEO of Brookshire Brothers, was among those who said the store was built with Texas A&M students, faculty and other stakeholders in mind.

“To sum it up, speaking to you as a former student — class of 2000 — gig ’em. This is your store,” Alston told the hundreds in attendance who crowded into the store’s outdoor event venue and cheered his closing words.

“I think this is awesome — it’s a great amenity to the community,” Harvell said. “There’s a great market for this right here at this exact location because a lot of the kids don’t have transportation. I think it’s going to be a successful venue.”

Harvell said she lives near the facility and especially appreciates the store’s deli. She also noted that the city will collect taxes from the store’s sales, and she said the facility could also prove to be a draw to those visiting from outside Brazos County.

Nichols also spoke of the store’s convenient location and anticipated it would have a positive effect on the community.

“It’s always good to have something like this that creates some commercial node to balance the housing out here,” Nichols said. “I’m certainly supportive of what the university has been trying to do on this side of the campus.”

During the ceremony, Alston recognized Lisa Burton, director of the master’s of science marketing program at A&M’s Mays Business School, for a partnership between the store and the program in which A&M marketing students worked with Brookshire Brothers to conduct market research that helped the store hone in on product offerings.

“Our students did secondary research, but they also did a lot of surveys from a variety of sources — students, faculty, staff and community members — to find out what it is that the people want,” Burton said. “We all know that this area is going to have different preferences than Navasota or Caldwell. The students did a lot of in-depth investigative work and came up with great recommendations for categories and products that Brookshire Brothers should have on hand for their clients here.”

Ty Longmire-Monford, a soon-to-graduate student in the master’s-level program, said he and a team of classmates worked with Brookshire Brothers throughout the fall semester.

The facility also includes a bar that serves coffee, beer on tap and wine by the glass.

Stephanie Young, who is set to graduate from Texas A&M on Saturday, has developed a wireless device for pets that measures heart activity and body temperature.

Rather than a typical commissioning ceremony held in conjunction with a graduation, Friday’s event was held separate from the multiple commencements taking place over seven days.

The Morning Reveille: May 10

The Morning Reveille: May 14

Track championships: Texas A&M's Tyra Gittens set a meet record in the heptathlon high jump and finished the day atop the multi-event lead…

The Morning Reveille: May 12

The Morning Reveille: May 13

Softball team loses: The 19th-ranked Tennessee softball team earned a 3-2 walk-off victory over Texas A&M in the second round of the South…

May 4, 1919: The statue of Lawrence Sullivan Ross was dedicated. It was created by Pompeo Coppini, who was responsible for several statues on …

The Brookshire Brothers grand opening event on Tuesday, April 27, 2021, featured appearances from the Texas A&M University Yell Leaders, Parsons Mounted Cavalry, Reveille, the Aggie Band and the Singing Cadets. The store, located on George Bush Drive West by Park West Apartments, is across the road from Texas A&M's West Campus and will cater to students, faculty and staff.