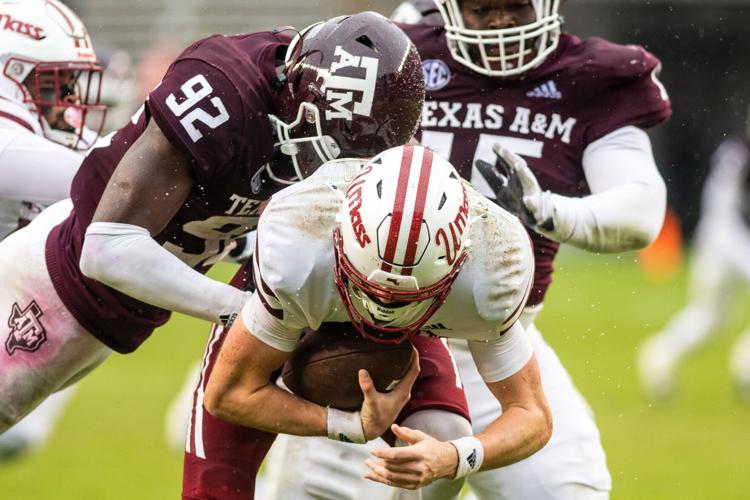 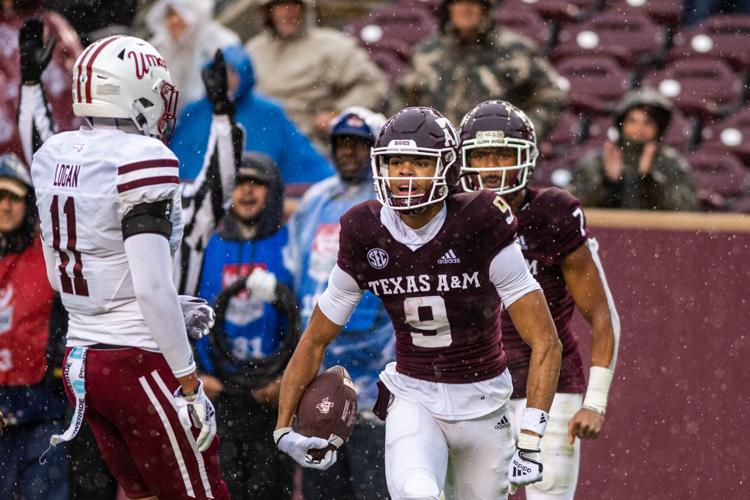 On the sideline: A&M junior running back Devon Achane missed his second straight game with an injury, and senior tight end Max Wright didn’t play after suffering an injury against Auburn last week.

Wet football: UMass defensive back Tyler Rudolph dropped an easy interception after making a perfect read on the play.

Invisible defender: No one covered UMass tight end Josiah Johnson, who had a 21-yard catch to the A&M 7-yard line. He couldn’t score because he got turned around along the sideline, going out of bounds as he fell.

Rolling along: UMass had the football for the last 4 minutes, 51 seconds of the quarter, marching 75 yards in 10 plays to reach the Aggie 5.

Call reversed: Muhammad initially had a 45-yard catch and run, but replay official Gerald Hodges overturned it. Just before Muhammad’s knee touched down, the ball was knocked free by Rudolph with UMass’ Jalen Stewart recovering it at the Minutemen’s 14. A&M hurried and ran a play, but referee Wayne Winkler said before the snap he was buzzed by Hodges, who planned to retire after the game.

Tired of seeing red: A&M quarterback Conner Weigman scrambled for 22 yards after the Aggies had rushed for minus 3 yards on the previous 11 carries.

Filling in nicely: A&M wide receiver Noah Thomas caught a 22-yard touchdown pass for his first TD. Thomas, filling in for fellow true freshman Ivan Stewart who was out with an injury, had an 18-yard reception earlier in the quarter. Thomas came into the game with only two catches for 18 yards in nine games.

Stumbling: Weigman corralled a low snap only to drop the ball as he set to throw. Weigman recovered the fumble but lost 4 yards on the play. A&M’s Randy Bond missed just short on a 47-yard field goal attempt on the next play.

Key statistic: UMass had 14 yards in the quarter, going 0-of-5 passing and 0-of-5 on third downs.

Drive fizzles: A&M’s Amari Daniels had a 26-yard run to the UMass 11, the longest run by an Aggie running back in the game. But a second straight sweep by Daniels lost 2 yards. An incompletion and a false start penalty on lineman Kam Dewberry led to a 35-yard field goal by Bond.

No one fooled: UMass wide receiver Isaac Ross caught a lateral and threw deep to wide receiver Cameron Sullivan-Brown, who was well covered with the football coming no one near him.

Key statistic: Each team had three first downs in an uneventful 15 minutes.

Last chance: UMass failed on fourth-and-7 from its own 36. Olson was forced to throw the ball away when no receiver could get open. A&M then needed only four runs by Le’Veon Moss to score a touchdown.

Saturday’s matchup with No. 5 LSU effectively served as Texas A&M’s bowl game, and the Aggies made the most of the night by spoiling the Tigers’ College Football Playoff chances with a 38-23 upset victory. Here are three quick takes from the game:

Cessna's grades: Aggies produce an effort to remember in win over No. 5 Tigers

Texas A&M’s victory over LSU ended talk of buying out Jimbo Fisher, which was a reach since it would cost approximately $86 million. Add in the buyouts for his assistants along with hiring a new coach and staff, and the final cost would be at least $150 million.

A common analogy came to Layden Robinson as he thought about how the Texas A&M football team got to this point, which is searching for just its fifth win of the season Saturday against LSU in the Aggies’ 2022 finale.

Devon Achane’s athleticism and agility has given Texas A&M football fans plenty of chances to ooh and aah over the last three years.

The Texas A&M football team had a trio of players earn Southeastern Conference honors of the week for their efforts in a 38-23 victory over fifth-ranked LSU on Saturday.

If Texas A&M’s Jimbo Fisher hires an offensive coordinator this offseason, he needs to find one who will call the kind of game he did against fifth-ranked LSU.

How Texas A&M coordinates its flyovers before home football games

Lt. Col. Morgan Smyth had what he called a once-in-a-lifetime opportunity earlier this fall as his Marine Corps career nears an end: leading a flyover at Kyle Field before a home Texas A&M football game.

Just when you thought you had the Texas A&M football team figured out, think again.