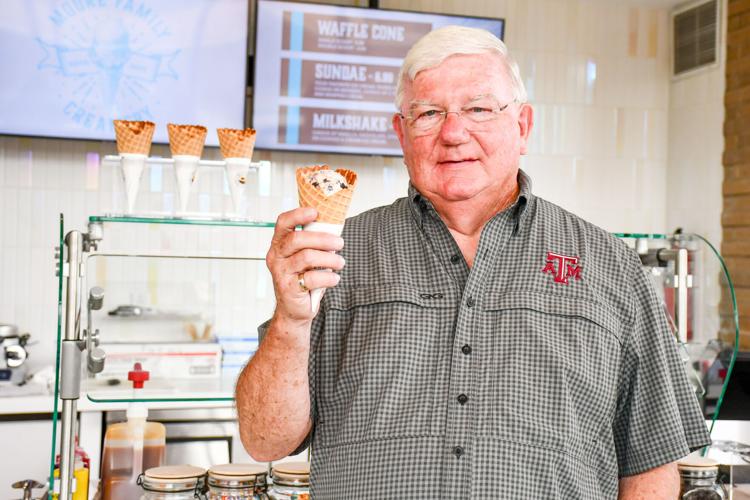 Kent Moore, A&M Class of 1972, holds a single scoop of Blue Bell Cookies ‘n Cream ice cream in a waffle cone inside the new creamery in Aggie Park that is named for Moore, his wife, Debbie and their family. The Moore Family Creamery brings back an Aggie legacy. 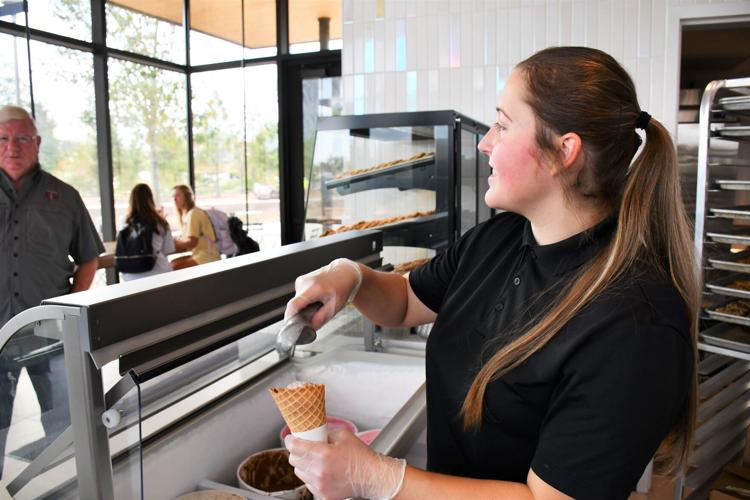 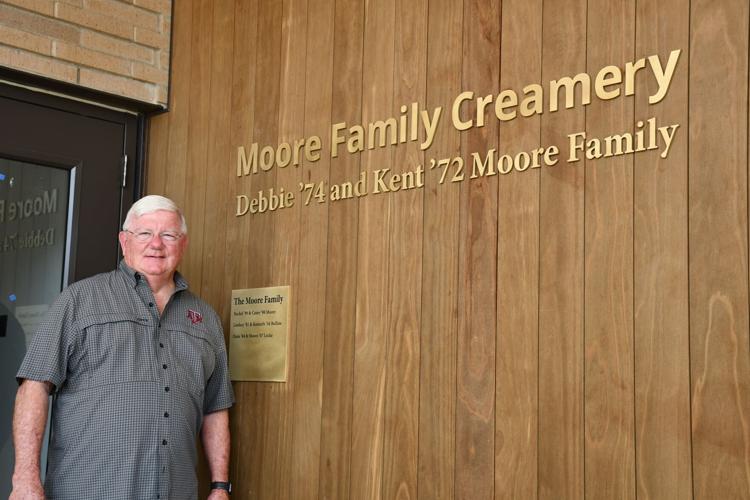 Kent Moore, A&M Class of 1972, stands alongside the sign outside the new Moore Family Creamery in Aggie Park.

An old staple of Texas A&M University has returned in a new way at the recently opened Aggie Park across from Kyle Field — a campus creamery.

The Moore Family Creamery opened its doors Sept. 2, when Aggie Park debuted. The creamery serves a number of sweet treats, from classic ice cream cones to milkshakes and ice cream sandwiches. It is open seven days a week from 11 a.m. to 8 p.m.

When plans for Aggie Park were announced, Moore said he joked maybe his family could have restrooms named after them. After talking with staff at The Association of Former Students about which park components needed fundraising, Moore said he and his son, Casey, stopped when the creamery came across the list.

The new creamery hark back to a creamery open on A&M’s campus for most of the 20th century.

“It seemed like it would be a fun place and that it’s bringing back a tradition that was here,” Moore said. “It just seemed like the right spot for what our family wanted to do. And we got some restrooms in the deal, so it worked out.”

Outside of the creamery is a plaque with the names of Moore, his wife, Debbie, and children’s names. Both Kent and Debbie, along with their three children and their spouses all went to A&M.

“This really is a family thing and that’s what I’m most proud of,” Moore said.

Janson Westmoreland visited the creamery for the first time on Saturday and ordered a single scoop of chocolate ice cream. Westmoreland said he thinks the creamery provides a space for fans and students to step away and have a place to hang out.

“I would’ve never imagined putting a creamery in the middle of tailgates,” said Westmoreland, A&M Class of 2018, “but I think it’s awesome because none of the tailgates have ice cream and it’s a way to step away, get your dessert, and go back to the tailgate, drink a beer and get ready for the football game.”

Memories of the old campus creamery have stuck with Ray Riley, manager of Rosenthal Meat Center.

“The Creamery always had a line coming out with people buying malts and shakes and hand-dipped ice cream,” said Riley, A&M Class of 1979.

A campus creamery was a part of A&M since the early 20th century, according to The Battalion archives. In 1956, the creamery moved from west campus to a new building next to Evans Library. Milk for the creamery’s ice cream came from cows at A&M’s former Dairy Cattle Center on a 450-acre complex off F&B Road northwest of campus. The creamery was open until 1992 when it closed due to construction of the Evans Library Annex and was destroyed in 1995 to make room for the Central Campus Garage.

A new creamery was being built on A&M’s west campus near Discovery Drive and was supposed to house the old creamery’s ice cream-making equipment, according to a 1997 article in The Battalion. A&M’s student newspaper reported in 1999 that the building, which cost $3.5 million, was completed in the fall of 1998, but went unused for a year. Issues arose when the old creamery equipment was deemed unusable.

In the spring of 1983, A&M’s Rosenthal Meat Center began selling products produced at the creamery, according to Riley. When the creamery closed in 1995, Riley said the Meat Center started selling Blue Bell. That lasted until the end of 1999 when hopes of a new creamery opening were bleak. Riley said A&M’s dairy herd was sold off soon after.

“We already knew we were in the process of making our dairy herd smaller, so it was just decided in the Animal Science Department that they would not have a creamery,” Riley said.

Over 25 years later, a creamery has returned to A&M’s campus. It’s different than the one old Aggies remember. Blue Bell is sold instead of homemade ice cream. Riley said he was impressed with Aggie Park, including its addition of a creamery.

“And the thought of being able to walk on campus and be able to walk over to the Creamery and enjoy an ice cream there,” Riley said, “I think that’s going to be a great event or relaxation for Aggies and former students and all.”

Moore said he thinks the creamery is a great first date spot for students, who he said can return a year or so later and put an engagement ring on top of their ice cream cone.

“This will be a great place for the students to get to know each other and really feel like they’re a part of something special,” he said.

Miami's Van Dyke enjoyed crowd, not outcome last week at Kyle Field as Johnson had best of both worlds

Over the summer, a few of the football coaches at Corona del Mar High School in California glanced at some of the plays from Texas A&M’s playbook. Former A&M quarterback Nick Starkel, now the Sea Kings’ co-offensive coordinator and quarterbacks coach, wanted to know if they had seen anything like the route patterns and concepts Aggie head coach Jimbo Fisher had conceived.

Texas A&M’s entire 2023 football schedule was unveiled Tuesday after the Southeastern Conference announced the league’s slate for next fall.

ARLINGTON — In another dramatic edition of the Southwest Classic, the 23rd-ranked Texas A&M football team needed every bounce and positive play to upend No. 10 Arkansas 23-21. Here are three quick takes from Saturday’s game at AT&T Stadium.

Texas A&M junior quarterback Max Johnson will have added incentive when he leads the Aggies against Arkansas at 6 p.m. Saturday in the Southwest Classic at AT&T Stadium in Arlington.

Texas A&M made noise by blocking out the noise; A&M-Miss. State will kick at 3

Texas A&M blocked out noise and distractions in playing better last week and getting a much-needed victory. The Aggies will have to block better and amp up their game to be successful in the next month.

Kudos to Johnson, but there's work to be done

Max Johnson gives Texas A&M a chance to have a highly successful season, but he’ll need much more help than he had in Saturday’s 17-9 victory over Miami.

When quarterback Max Johnson entered his name in the NCAA transfer portal, it didn’t take long for seven or eight schools to reach out to him, Johnson’s father and former NFL quarterback Brad Johnson said.

Kent Moore, A&M Class of 1972, holds a single scoop of Blue Bell Cookies ‘n Cream ice cream in a waffle cone inside the new creamery in Aggie Park that is named for Moore, his wife, Debbie and their family. The Moore Family Creamery brings back an Aggie legacy.

Kent Moore, A&M Class of 1972, stands alongside the sign outside the new Moore Family Creamery in Aggie Park.