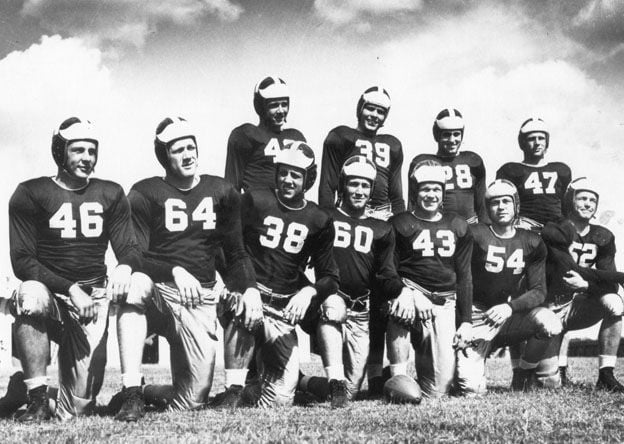 John Kimbrough (39) led the 1939 Texas A&M football team to its first national championship. The Aggies went 11-0 and defeated Tulane in the Sugar Bowl. 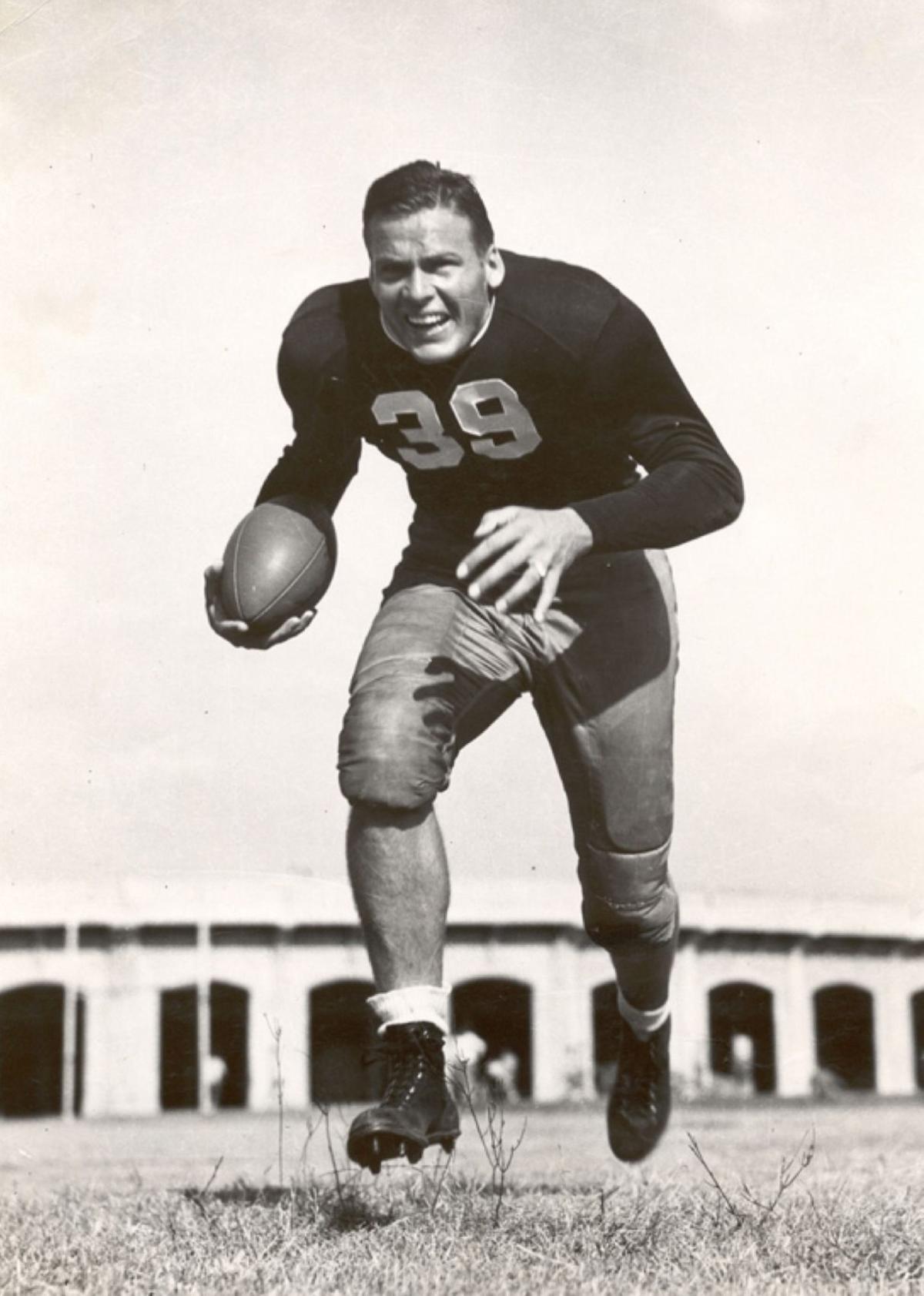 John Kimbrough, star running back, became an actor after helping the Aggies go undefeated in 1939. Kimbrough is most-known for his football skills, despite starring in two major Hollywood films — Sundown Jim and The Lone Star Ranger — in 1942. 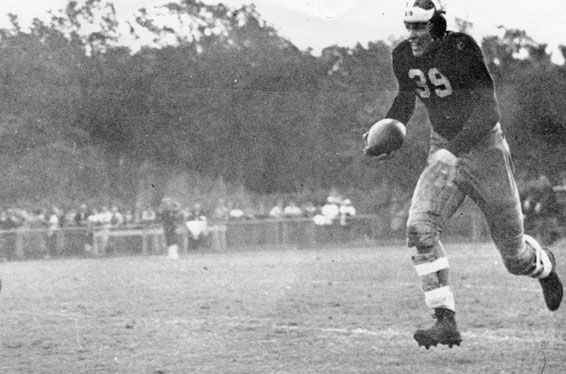 John Kimbrough finished second in the Heisman Trophy voting in 1940, and was an All-American running back.

If the Aggies are looking for inspiration as they try to end a three-game losing streak, they need look no further than the team they are about to honor, the 1939 national champions.

The school's lone consensus national champion will be remembered Saturday with the Aggies wearing 1939 throwback uniforms against Louisiana-Monroe.

The '39 team went 10-0 in the regular season, outscoring the opposition 208-18 to be the Associated Press' No. 1 team. Back then, the final poll came out before the bowl games. The talented team had 10 players earn at least honorable mention All-America honors led by fullback John Alex "Jarrin'" Kimbrough, who made the 11-man first team.

Yet as A&M prepared to play fifth-ranked Tulane in the Sugar Bowl, there were those who questioned the Aggies' worth, sports writer John Sidney Smith wrote in the Bryan Daily Eagle. A&M's lack of depth and team speed concerned many. Some also wondered what the Aggies would do if challenged since most of their games had been decided after three quarters. A&M had trailed just once all season -- 3-0 at Santa Clara early in the season when the Aggies rallied for a 7-3 victory.

A&M answered all questions with a come-from-behind 14-13 victory on New Year's Day at Tulane as Kimbrough led a seven-play, 69-yard drive in front of 73,000 fans, which at the time was the most to see the Aggies play. Kimbrough had three crucial plays on the winning drive. The "Haskell Hurricane" had runs of 14 and 20 yards, taking snaps from center in the double-wing attack. From the Tulane 27-yard line, quarterback Walemon "Cotton" Price threw to end Herb Smith who lateraled to Kimbrough, and Kimbrough smashed through many would-be tacklers for the score.

Price, who perhaps played the greatest game of his career, kicked the game-winning extra point. Tulane couldn't answer and was forced to punt, allowing Kimbrough and back William E. Conatser to team up for 63 yards rushing as the Aggies ran out the clock, reaching the Tulane 6 when the game ended.

"The thing that most of the fans and scribes went away marveling about was his agility and speed," Smith said. "They had expected a pile-driving line plunger, but had no idea the 210-pound back could skirt Tulane's widely heralded ends as he did."

Kimbrough gave A&M a 7-0 halftime lead with a 1-yard touchdown run on the team's second possession after Tulane had held the Aggies on downs inside the 1. Kimbrough, though, kept coming at the Green Wave.

"Any guy who tackles Kimbrough doesn't feel like talking for 5-10 minutes," said Kellogg, who added that after one tackle Kimbrough told him, "You are the cleanest little tackler I ever saw."

Kellogg had a 75-yard punt return for a touchdown off a quick kick to give Tulane a 13-7 lead. But the 5-foot-8 Smith, the smallest man on the field, blocked the extra point.

Tulane had tied the game early in the fourth quarter. A&M turned the ball over on the last play of the third quarter when Kimbrough couldn't handle a lateral from Derace "Mose" Moser who reversed his field before tossing the football back to Kimbrough. Tulane recovered at the A&M 39. Monette Butler rushed four times for 20 yards and Fred Cassibry carried to the A&M 9. A&M's defense stiffened, but Butler scored from the 1 on fourth down.

It was the first touchdown A&M's defense allowed since a 20-6 win at TCU in the fifth game of the season on Oct. 21. But A&M's defense tightened up, and Kimbrough did the rest, much to the chagrin of Tulane coach Red Dawson, who had recruited him in 1937, even bringing him to New Orleans.

Dawson was upset with the officiating, including a noncall on Kimbrough's final TD run, according to Marty Mule of the New Orleans Times-Picayune who wrote Sugar Bowl Classic: A History.

"They used the same pass play several times during the game," Dawson said. "The ends came across the line and blocked the middle linebacker out of the play. The rule states there can be no blocking down field before the pass is thrown."

"He's the greatest football player in the world," Norton said. "And you can put my name on that with a picture."

A&M's only other postseason game had been a 22-14 victory over Centre College in the 1922 Dixie Classic in Dallas' Fair Park.

A&M ended up as the only unbeaten, untied team in 1939 when third-ranked Southern California upset second-ranked Tennessee 14-0 in the Rose Bowl. Tennessee hadn't allowed a point in the regular season. USC finished 8-0-2 and later was named the national champion by the Dickinson System. USC started recognizing its 1939 team as a national champion in 2004.

Several schools have done that in the last decade, including A&M which two years ago started recognizing its 1919 and 1927 teams as national champs.

A&M's '19 team went 10-0 without allowing a point under D.X. Bible. Billingsley and the National Championship Foundation recognized it as national champion. Bible's '27 team went 8-0-1 with a scoreless tie against TCU. The Sagarin-ELO rating system rated A&M that season's best team.

But the 1939 team is the football program's gold standard.

The defense allowed only 1.7 yards per carry, according to the Houston Post's Mickey Herskowitz.

Kimbrough, who finished second to Michigan's Tom Harmon in the 1940 Heisman Trophy voting, was one of many juniors to make the AP All-America team in 1939.

AP sports editor Dillon Graham wrote when the All-America team came out that the "210-pound fullback John Alex Kimbrough cracked opposing forward walls wide open to lead the Texas Aggies to their most fruitful season in many years."

The '39 team also was the first Aggie team to win 11 games. Only three Aggie teams have won that many games since, the last being in 2012 in A&M's first season in the Southeastern Conference and its first under head coach Kevin Sumlin.

"Our guys have a real sense of the history of the program," Sumlin said. "There's an old saying: 'You should never, ever confuse history for tradition or the other.' What is that? History is playing football. Tradition are things that surround the football program, like Midnight Yell, 12th Man, and winning is part of the tradition. Those two things are very, very different. We spend time with our players talking about history and trying to be a part of both -- and being part of history is ... there's a sign in there that says, 'Leave your jersey in a better place.' You owe it as an Aggie to leave your jersey in a better place for the next guy to wear. That's part of the history that we want our players to be part of but also respect the people who came before you. "Unfortunately we don't have a lot of national championships. One of the great things about being able to respect that history is the national championship team that we have we're going to pay honor to in an anniversary edition. That's a big deal for our players. But it's also a big deal for them to still try and be part of that history and tradition. We haven't had a lot of 10- or 11-win seasons, and it gives our guys also an opportunity to really be a part of those type of things."

Texas A&M won’t have a true rivalry game until Texas joins the Southeastern Conference, but there are teams the Aggies want to beat worse than others. Alabama tops the list and LSU is next. Not surprisingly, those teams lead the series. Alabama has won 11 of 14 meetings with the Aggies and LSU has a 34-22-3 edge.

There was never a question Bryce Foster was destined to be an offensive lineman. By the time he entered kindergarten, Foster stood 5-foot tall, weighed 100 pounds and sported calf muscles the size of a body builder’s dream.

John Kimbrough (39) led the 1939 Texas A&M football team to its first national championship. The Aggies went 11-0 and defeated Tulane in the Sugar Bowl.

John Kimbrough, star running back, became an actor after helping the Aggies go undefeated in 1939. Kimbrough is most-known for his football skills, despite starring in two major Hollywood films — Sundown Jim and The Lone Star Ranger — in 1942.

John Kimbrough finished second in the Heisman Trophy voting in 1940, and was an All-American running back.