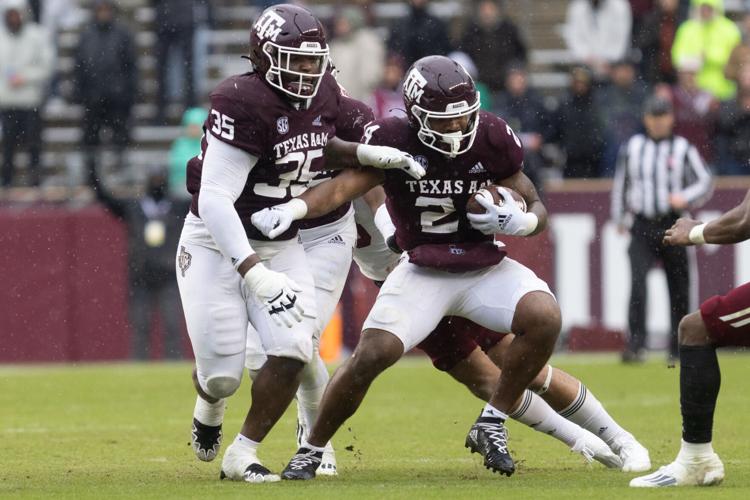 Texas A&M linebacker Chris Russell Jr., right, runs with the ball after recovering a fumble during the second half against UMass on Saturday at Kyle Field. 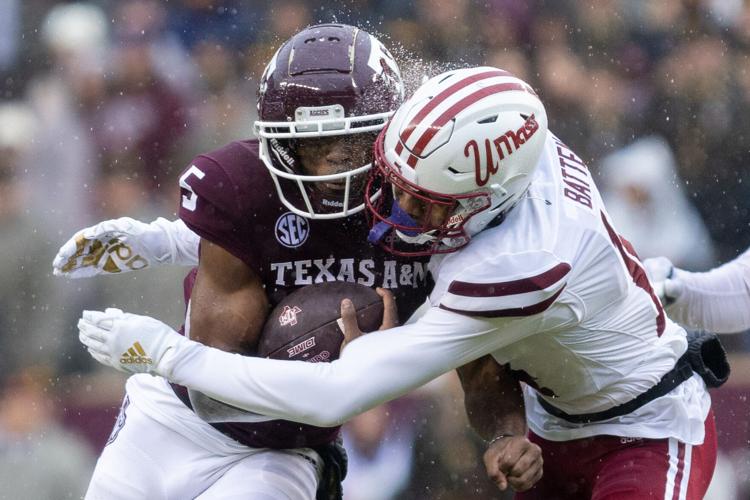 Texas A&M wide receiver Jalen Preston, left, gets hit by UMass defensive back Javon Batten during the first half Saturday at Kyle Field.

Even when Texas A&M finally managed to win, it lost.

The Aggies beat Massachusetts 20-3 on Saturday to end a six-game winning streak. A&M was far from great, but it played well enough to win for the first time since Sept. 24. That’s a reason to celebrate. Yet by game’s end only a paltry crowd remained at Kyle Field in what would’ve been a poor turnout for a spring game.

In the fans’ defense, the weather was dreary, and so was the quality of play. UMass lived up to its billing as the nation’s worst team. It was painful to watch the Minutemen try to pass. Obviously, 7-on-7 hasn’t made its way to Massachusetts’ high schools. UMass was 9-of-22 passing for 55 yards. UMass did have success running the football in the first quarter but not afterward. The only way UMass could have scored again was if A&M had a turnover deep in its own turnover.

That being said, UMass was in the game until failing on fourth-and-7 from its own 36 with seven minutes left in the game. That helped the Aggies tack on a late touchdown, but the final score didn’t come close to passing any eye test, not when the Aggies were 33.5-point favorites. They needed that last score just to avoid scoring the fewest points of the 10 FBS teams to play UMass (1-10) this season. That’s not a reason to celebrate.

A&M came in averaging 21.5 points per game to rank 108th in the country and it couldn’t even match that against UMass, which gave up 42 points to both Tulane and Liberty and 55 to Toledo. A&M doesn’t have enough playmakers to score that many points. Injuries have left the offense a shadow of itself. A&M started only four players on offense — all linemen — who started in the season opening 31-0 victory over Sam Houston State. That seemed like a listless effort at the time, but now looks like it was a scoring fest.

A&M’s defense did a solid job Saturday, allowing a season-low 168 yards. A&M’s offense, which had three turnovers, wasn’t able to take advantage of its many chances. A&M’s offense was just a notch better than UMass’ unit, creating a dull, boring game, very reminiscent of last week’s 13-10 loss at Auburn when the Aggies could must only 215 yards.

You can’t blame the no-shows for passing on the game or the two-percenters who left after halftime. Many of them bought tickets to see a Top 10 team, not to celebrate beating a bottom 10 team while catching a cold in the dreary conditions.

Some of the younger Aggie players earned the right to sing in the rain. A&M started six true freshmen, a pair of redshirt freshmen and seven sophomores. Their future looks bright. That doesn’t change the gloomy present, which is why only friends, family and hardcore fans were around at game’s end to share in the fun.

Everybody else has moved on to next year.

Texas A&M linebacker Chris Russell Jr., right, runs with the ball after recovering a fumble during the second half against UMass on Saturday at Kyle Field.

Texas A&M wide receiver Jalen Preston, left, gets hit by UMass defensive back Javon Batten during the first half Saturday at Kyle Field.