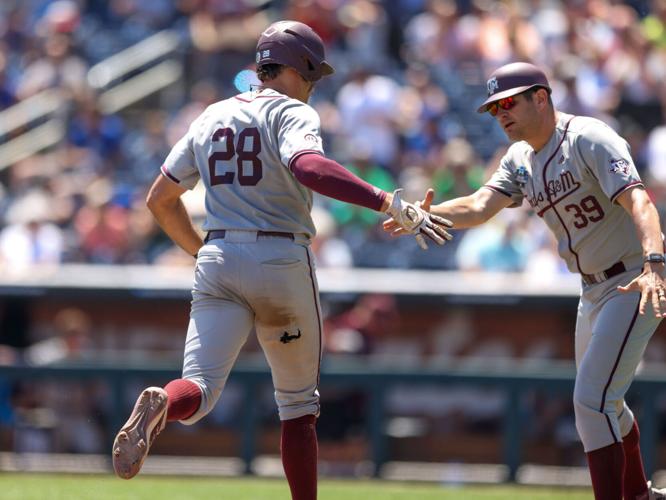 TTexas A&M’s Trevor Werner is congratulated by Nolan Cain after hitting a home run in the fifth inning against Notre Dame during Tuesday’s elimination game at the College World Series. 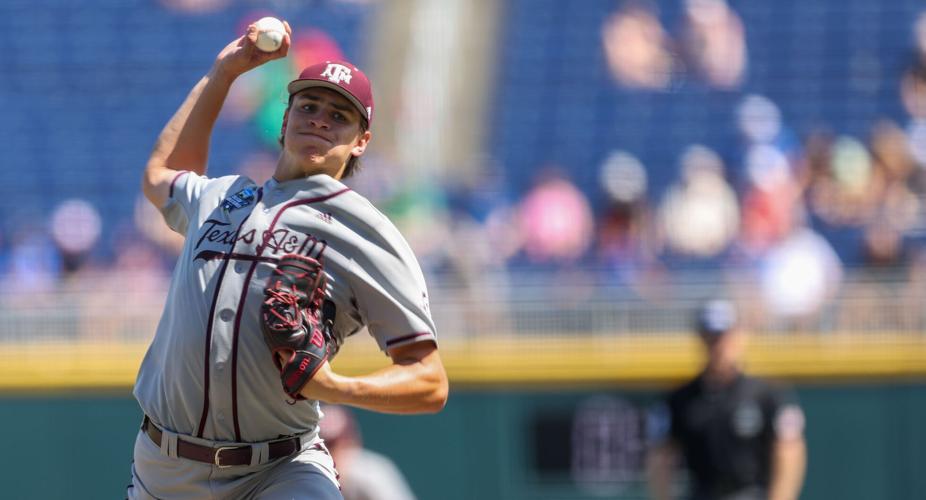 OMAHA, Neb. — In the middle of the Texas A&M baseball team’s College World Series opening loss to Oklahoma, starting pitcher Nathan Dettmer took off his hat and sat in the dugout with his head in his hands.

The sophomore right-hander had just given up seven runs in 1 2/3 innings and emotionally blacked out under the weight of the stress, he said.

“When I came out after that game, I just felt so little, and I felt like I let everyone down and, I’m not going to lie to you, I went into my hotel room and I cried,” Dettmer said. “I didn’t know what to do. I felt lost.”

Tuesday, Dettmer proved the only way to recover from a bad outing is to get back on the horse as he held Notre Dame to no runs and three hits in a seven-inning gem. In turn, the Aggies ousted the Irish from the College World Series with a 5-1 elimination game victory at Charles Schwab Field, punching A&M’s first-ever ticket to the College World Series semifinals.

“To come back and have Coach [Jim Schlossnagle] give me the ball just two games later, all that confidence just flowed through me, to know that they trust me and the players trust me behind me,” Dettmer said. “All I had to do was believe in myself.”

It began with pitching coach Nate Yeskie, who stood over Dettmer (6-3) in the Aggie dugout Friday, encouraging the sophomore when he couldn’t raise his head out of his hands. Mechanics weren’t necessarily Dettmer’s problem, which had carried over through seven starts of less than five innings. The issue was between his ears, Yeskie said.

“It’s baseball. You’re going to have some rough patches, but get ready to go again,” Yeskie said he told Dettmer. “Identify what you need to do.”

Schlossnagle knew he needed to go to Dettmer at some point if the Aggies wanted to bring him back in the final series, should A&M (44-19) make it that far. Having thrown only 44 pitches Friday, he felt comfortable handing him the ball on short rest, he said. Also, Notre Dame (41-17) featured a batting line up with seven right-handed hitters, so left-handed starter Ryan Prager would not have been the best option, he said.

“I honestly didn’t think we had an option,” Schlossnagle said. “I thought that was the only option, if we were going to, A, try to beat Notre Dame; and B, try to win the College World Series.”

Dettmer’s confidence manifested itself in his ability to control his secondary pitches. From the start of the game, Dettmer was able to work backwards on hitters, leaning heavily on his slider and changeup in the first time through the order. Dettmer has lacked the ability to control all four of his pitches in one outing over the last two months.

“He was pitching everybody differently,” Irish right fielder Brooks Coetzee III said. “Didn’t fall into tendencies. My first AB was different than my second AB. You just tip your cap.”

And even Dettmer was surprised with how much movement he was able to get on his two-seam fastball, which runs into the hands of right handed hitters and away from lefties.

“There’s times where he got outs today where we just wanted a fastball down the middle. It runs and moves and I’ve seen guys all year swing over the top of it and, at times, by six or eight or 10 inches,” Yeskie said.

“To bounce back from whatever happened [in Game 1] and preform this way, if I see him somewhere I’m going to tip [my] hat and shake his hand,” he said.

Meanwhile, the Aggie offense was busy giving Dettmer cushion with which to work.

A&M’s bats made the most of Fighting Irish miscues in the third, scoring two on an errant throw by Jack Brannigan and a sacrifice fly by second baseman Ryan Targac.

Trevor Werner led off the fifth by launching his seventh home run of the season into the home bullpen on a line. Two batters later, left fielder Dylan Rock drove Jack Moss home, who had reached on a two-strike double.

Freshman Brad Rudis, who has been A&M’s go-to arm to close out games through the postseason, spelled Dettmer in the top of the eighth. However, the righty got a quick hook after giving up a leadoff home run to Coetzee, hitting a batter and then walking one. Joseph Menefee came in to clean up the jam and then worked through the ninth inning for his second save of the season.

Prior to Tuesday’s win, the Aggies had never won more than one game in an appearance in Omaha, with only two World Series wins in program history before this year’s trip. Now, A&M advances to the College World Series semifinals to face unbeaten Oklahoma at 1 p.m. Wednesday. A&M will need to beat the Sooners twice to push into the final series, with the if-necessary second game scheduled for Thursday, time to be determined.

But, for at least 12 hours or so, A&M’s baseball program will celebrate the rebound Dettmer made to give the Aggies at least one more day in Omaha.

“Think about however many hours ago it was, he was sitting in the dugout feeling like he let his team down and now he’s on cloud nine,” Yeskie said. “Same guy. Same ability. It’s just sometimes it’s the breaks, but it’s also just baseball and the sun comes up the next day.”

OMAHA, Neb. — After starting pitcher Nathan Dettmer labored through 1 2/3 innings in a loss to Oklahoma Friday, the sophomore’s mother, Mary Pat Dettmer, didn’t think there would be a chance her son would throw again unless the Aggies made it to the second weekend of the College World Series.

Powered by Pringles: How the Texas A&M baseball team has rallied behind chips

Micah Dallas caught the attention of many at Blue Bell Park last Sunday in the Texas A&M baseball team’s 15-9 win over TCU to clinch the NCAA College Station Regional.

OMAHA, Neb. — After Texas A&M third baseman Trevor Werner completed his postgame press conference duties Friday at the College World Series, he was stopped by a man working for ESPN.

OMAHA, Neb. — Texas A&M’s Micah Dallas was as consistent as he’s been throughout the postseason in his first College World Series start as an Aggie, carrying a postseason 2-0 record and a 2.45 earned run average into Sunday’s bout with Texas.

OMAHA, Neb. — Charles Schwab Stadium sits less than a mile from the border with neighboring Iowa. Close your eyes for just a moment and you won’t have an idea whether you are still in the Cornhusker State or if you’ve crossed over into Carter Lake or Council Bluffs, Iowa — until you see a casino.

OMAHA, Neb. — The Texas A&M baseball team might have entered the College World Series’ first elimination bout with a three-game win streak over the Texas Longhorns, but Aggie third baseman Trevor Werner could hold no claim to the victories.

Throwing a “horns down” gesture after singing the national anthem at the NCAA women’s softball championship cost a Texas A&M graduate the opportunity to perform at the College World Series next week, he said.

OMAHA, Neb. — It’s one thing to experience the College World Series between the chalk lines of Charles Schwab Field.

TTexas A&M’s Trevor Werner is congratulated by Nolan Cain after hitting a home run in the fifth inning against Notre Dame during Tuesday’s elimination game at the College World Series.