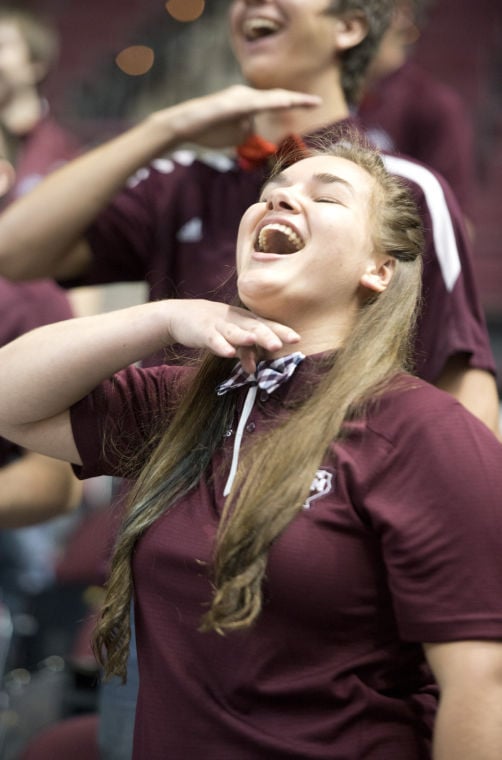 Kelly Robert plays bass drum for the Hullabaloo Band at Aggie basketball games, and you might hear her make "the siren sound" during an opposing player's free-throw attempt. 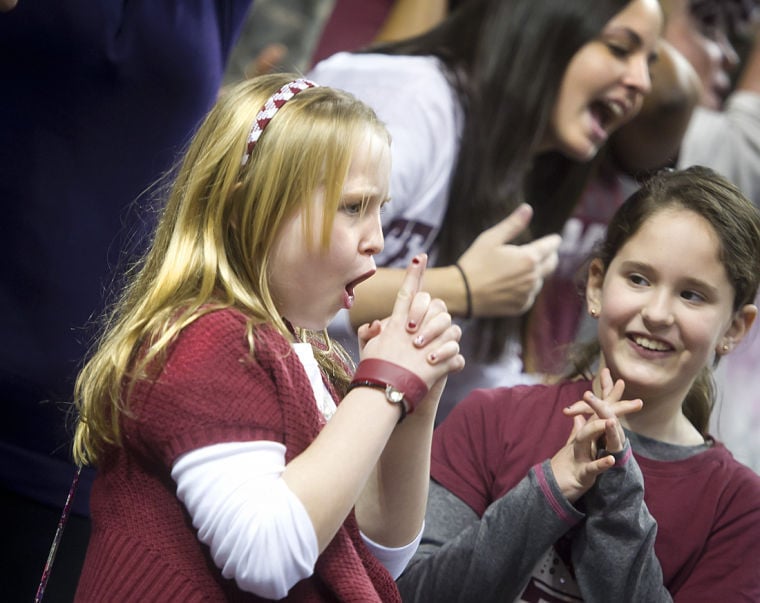 Anna Cate Kennedy, daughter of Texas A&M men's basketball coach Billy Kennedy, whoops it up with other fans during a recent Aggie game.

The sounds of terror await opponents in Reed Arena.

On one end, it comes in the form of Anna Cate Kennedy, the daughter of Texas A&M basketball coach Billy Kennedy. On the other side of the court, a near-inhuman noise comes from Kelly Robert, a member of the Hullabaloo Band.

Anna Cate is a seemingly harmless 9-year-old, who sits in the second row of the student section. She blends in with those around her — standing, yelling and swaying when the band plays the Aggie War Hymn.

But when an opposing player steps to the free-throw line, Anna Cate attacks with a scream so powerful it has earned the "Banshee" nickname from the Reed Rowdies.

According to her mother, opponents have had to suffer Anna Cate's wrath since Billy Kennedy coached at Murray State.

"It started when she was about 3," said Mary Kennedy. "Her dad is totally oblivious. The bench would turn around and laugh. Everybody else has their hands over their ears, and people are looking at me like they can't believe I would let my daughter do that to her throat. It doesn't hurt her, though."

The secret of Anna Cate's screaming success? "Drinking a lot of fluids," she said.

Two years ago, the Aggies faced St. John's in the 2K Sports Classic at Madison Square Garden. With 2 seconds remaining, St. John's trailed A&M by a point, but missed both free throws to give A&M the win. The Red Storm missed six of their final eight free-throw attempts.

Those watching the game on TV could hear a scream when St. John's was at the line. Twitter buzzed with talk of the mystery vocalist, including the "#banshee" hashtag. It wasn't until after the game that the New York media, including CBS analyst Jeff Goodman, learned that it was Anna Cate doing the screaming.

She doesn't shy away from her impact on the team. But she claims to have played a part in more wins, including this year's three-point victory over Rice.

"I don't really know," she said of the number of shriek-assisted wins, "because I've lost track of them."

Like any good father, Billy Kennedy gladly gives his daughter all the credit she wants. He acknowledges that he does hear her: "More than I need to."

"She's enthusiastic about it," he said. "She's been doing it for a number of years. I'm glad she's into the games and she loves to come to every one of them. She's claiming probably all the wins I've ever had since she's been there, so that's not a shock. But whatever she says, I'm going to say she's right."

Kelly Robert plays bass drum for the Hullabaloo Band on the opposite end of the court. But it's not the drum that gets your attention. It's her unique, high-pitched noise, which she calls "the siren sound."

She achieves it by yelling and hitting her throat with her hand repeatedly, creating a distraction that sounds like a piercing and extremely loud car alarm.

"People think I karate chop the heck out of my throat, but I barely hit it," Robert said. "It's all about the noise that I make."

The Hullabaloo crew rotates band members, so you won't hear Robert at every game. But you'll know when she's there. She said she acquired the skill at Pine Cove, a Christian camp near Tyler, where she saw a counselor do it. When she was in eighth grade, she could, too.

Robert doesn't claim to have contributed to countless victories. But she does note a big one, last season's win over 20th-ranked Missouri.

"I remember the Missouri game, they missed two," she recalled. "And I looked over, and two of the players were looking over at me. And we won the game by two points, so technically I won the game. But not really."

Mary Kennedy said that Robert's siren is a good addition to Anna Cate's screams. A&M player Jordan Green agrees. According to the junior guard, Robert has even thrown off the officials.

"The throat thing is crazier, no doubt," he said. "The refs have looked at each other and thought they were using an instrument. But it's just her throat.

"It's two sides of it now. You've got A.C. on our side and the girl hitting the throat on the other side. It was a little weird at first. It throws me off. But it's really funny."

Do the screams from Anna Cate Kennedy and Kelly Robert actually work? We dove into some next-level analysis to find out.

Visiting teams shooting free throws at Kennedy's end of the court are shooting 77 percent. A team shooting that high would be the 18th-best free-throw shooting team in the nation.

In Robert's case, opponents are shooting 60 percent at the line in the second half of games (when they're on the Hullabaloo Band's end of the court). A team with that percentage would rank 332nd in the nation, 13 away from the lowest possible spot. Granted, she's not at every game because of the rotation of Hullabaloo Band members. And maybe players shoot a lower second-half percentage because they get tired. Or maybe it’s just that "siren sound."

Kelly Robert plays bass drum for the Hullabaloo Band at Aggie basketball games, and you might hear her make "the siren sound" during an opposing player's free-throw attempt.

Anna Cate Kennedy, daughter of Texas A&M men's basketball coach Billy Kennedy, whoops it up with other fans during a recent Aggie game.