Memo Salinas recalls being hoisted up onto his dad’s shoulders at Midnight Yell Practice when he was a child, and becoming infatuated with the five Texas A&M students on the field. The 21-year-old is now one of those students.

The 21-year-old senior, Laredo native and agribusiness major comes from a long line of Aggies, including his father, Danny Salinas, his oldest brother, Danny Salinas Jr., and several cousins and uncles. Salinas grew up going to A&M football games and other campus events, sparking a love for all things Aggieland. He recalls his parents, Selika and Danny, picking him and his brothers, Danny Jr. and Eduardo Salinas, up from the school carpool line on Friday afternoons in the fall to make it to College Station in time for Midnight Yell.

“My brothers and my family and my friends who I’ve known my whole life will tell you that I was always a rowdy, fired up little kid going nuts,” Salinas said. “So I loved it. I was like, ‘These guys are like me. They’re just 20 years old and everyone loves them for it rather than getting mad at them for it.’”

Salinas’ loved ones say he has many qualities that make him a perfect fit for being head yell leader. His father calls him “an extremely friendly, lovable, considerate guy.” Guillermo Vela, a family friend who Salinas is named after, said he is “a very good, gregarious young man.”

Brig. Gen. Joe Ramirez, commandant of the Corps of Cadets, said Salinas is deeply committed to his family, faith, the university and the country.

“He fully understands the importance of being a representative for our university and the Corps of Cadets, and the fact that there’s a big responsibility that comes with that,” Ramirez said.

The road to head yell

As Salinas’ senior year of high school was ending, he knew he would attend A&M. But the decision to join the Corps of Cadets was one he didn’t make until soon before he was living on campus.

Salinas said his parents encouraged him to push himself rather than taking the most convenient route.

Vela, a member of the A&M class of 1964, encouraged him to join the Corps at Muster in Laredo that year, and Salinas recalls many people asking him if he would be a cadet.

“I just remember thinking there’s got to be something about it if all these people take that much pride in it,” Salinas said of that night.

Soon after, Salinas took a walk with his then-girlfriend, who also said he should join. It was the final bit of confirmation he needed.

The next morning, a family friend asked Salinas after church if he would be in the Corps. Salinas answered yes, much to the surprise of his family members whom he had yet to tell.

Throughout his time at A&M, Salinas has been a part of other organizations and served in leadership positions, including in the Ross Volunteer company, the Old Army Gentleman’s Society and Maroon Coats.

Being a cadet enabled Salinas to be part of Five for Yell, a group of five students the Corps of Cadets votes on to run for yell leader. The Five for Yell campaign often sweeps the positions during the student body election, and it is uncommon for the positions to be filled by students outside of the Corps.

The three senior yell leaders are eligible to be named head yell leader, selected by university officials. Salinas said an interview and selection is conducted by representatives from Student Affairs, athletics representatives, The Association of Former Students, former yell leaders, the outgoing student body president and others.

“It was a great group of people, and for them to listen to me and select me and trust me to lead the 12th Man this upcoming year is humbling and exciting all in one,” Salinas said. “I’m very blessed to have their trust and support going into this next year. I’m excited for the opportunity.”

The path to Salinas’ role was dotted with personal challenges, including issues with his health.

When he was running for junior yell leader and trying to be on the Five for Yell campaign, he was battling mononucleosis. He said he missed so much school his advisers were telling him he should consider withdrawing from the university.

Salinas lost 25 pounds and was in and out of the hospital. His parents wanted him home in Laredo. But Salinas said he pushed through, committed to becoming a yell leader.

A second health scare emerged during spring break 2020, right as the COVID-19 pandemic was beginning. A golf-ball-sized tumor was found on a gland at the point where Salinas’ jaw and ear meet. A scar remains from the subsequent surgery, which required 60 stitches.

“That was scary,” he said. “You go from accomplishing a dream that you’ve wanted your whole life to wondering what’s going to happen next week.”

Salinas credits his family and friends with helping him through all the difficult situations.

“We look back and laugh about the tough times because they’re behind us,” he said. “They don’t matter anymore, and this is where we are.”

Danny Salinas said that Memo and his two brothers are fighters, and that he and his wife raised them to never make excuses for why they couldn’t do something. He said he was concerned for his son’s health during these challenges, but now he wonders how anyone could have doubted him.

“He’s determined to do anything that he sets out to do,” Danny Salinas said.

A day as a yell leader

Yell leaders are easy to spot at an event, either wearing their denim overalls customized with their names or the all-white get-up of trousers, belt, button-down long-sleeved shirt with the sleeves rolled up, and paired with maroon tennis shoes.

Football game weekends are especially exciting, Salinas said, though he notes it’s hard to focus in class on Fridays as he’s brainstorming a fable to tell at Midnight Yell, and looking forward to seeing family members that weekend.

Midnight Yell means getting to bed late, and Salinas said operating on four or five hours of sleep in the days leading up to a game is typical.

On Saturday, Salinas said he goes to his Corps outfit’s tailgate and also visits with his family and other loved ones before he runs into Kyle Field. Salinas said his voice is shot after every game and he’s usually sunburned. His studies are always waiting for him on Sunday.

But Salinas calls it “the greatest job in the world.”

“Your job is to fire up the 12th Man,” he said. “It’s gonna be hard to find another job after this that’ll be greater than this one.”

The five yell leaders are important figures outside of football season, too. In addition to attending all home and away football games, the school website states that they go to several home sporting events throughout the year, as well as A&M Coach’s Nights, all new student conferences, all Fish Camp sessions and several campus events.

It was surprising, Salinas said, to learn that he was the first Hispanic yell leader. He said it’s an honor, but it comes with responsibility to represent not only himself and his family but also his community. He said he would love it if he could inspire other Hispanic students to do the same.

“It’s also important for us to show that, going forward, that this is what A&M is about,” Salinas said. “It’s a melting pot of a bunch of great people who at the end of the day call themselves Aggies. It’s a big responsibility for me to — Lord willing — set the tone for future generations, and let this just be the start of a lot of great things of this nature happening.”

The commandant said he first met Salinas on a recruiting trip in Laredo. To Ramirez, Salinas moving up to his new title shows others that anybody can be successful at A&M if they work hard enough for it.

Ramirez said he recalls being an officer in the military and having people in roles higher than his own shaking his hand and remarking that they had never met a Hispanic officer before. The lesson Ramirez gleaned from that experience is one he said he tries to pass on to Salinas, telling the new head yell leader that he needs to remember that he is now someone who thousands of other people will look up to.

“And for me, that’s been a big part of the discussions we’ve had,” Ramirez explained. “The fact that, like it or not, you now bear that responsibility on your shoulders of being a positive role model for a lot of young Hispanic men and women out there that want to go to college and want to be like you.”

Theron McAdoo met Salinas the first day they arrived on campus as freshmen and the two became friends. The fellow cadet said Salinas has a knack for inspiring people.

“Memo is going to be an outstanding Aggie for the rest of his life,” McAdoo said. “He’s never going to turn his back on A&M. … He’s always going to be the first one to protect the spirit of Aggieland. I know his service to the university will live long after his days as a yell leader.”

To Danny Salinas Jr., his brother is “very loving” and easygoing.

“He’s a good friend and he’s a good brother,” he added. “He’s dependable. People like that; people notice that in him.”

After he graduates in May 2022, Salinas said he wants to go to law school, remarking how his parents have always pushed him and his brothers to be successful.

“I think I’ve had a good amount of success in my college career,” Salinas said, “but now comes the big picture of success in the real world. … And I think that going to law school opens up that door for me to chase excellence, and continue to push myself to be my best and give my best to those around me, and hopefully one day a family.”

For the time being, Salinas’ focus is in Aggieland. His term as head yell leader officially began after the April 21 Muster ceremony.

This past year was quieter than past ones due to many canceled events during the COVID-19 pandemic, but Salinas said he expects things to be different in the coming semesters.

“We’re going to have a great year and lots of things to look forward to with — Lord willing — COVID going away and a lot of people energized and ready to return back to normalcy,” Salinas said. “I expect a lot of passion and energy from the 12th Man this upcoming year.” 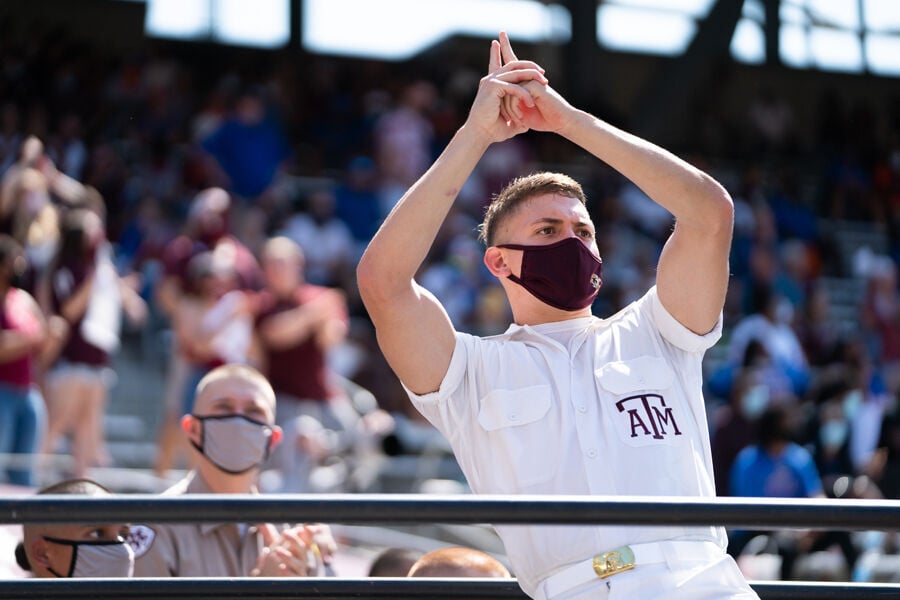 Memo Salinas said being the first Hispanic yell leader at Texas A&M comes with responsibility to represent not only himself and his family but also his community. 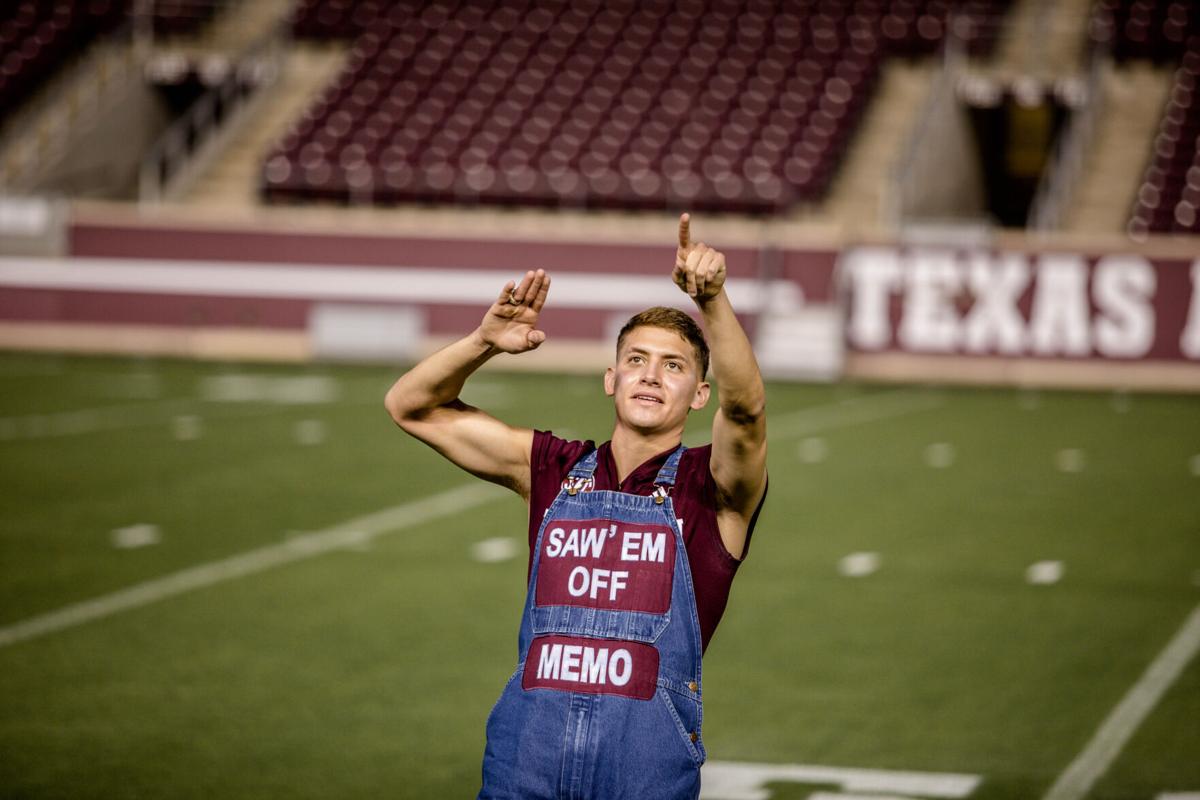 Memo Salinas gestures to the Kyle Field crowd during Family Weekend in April. 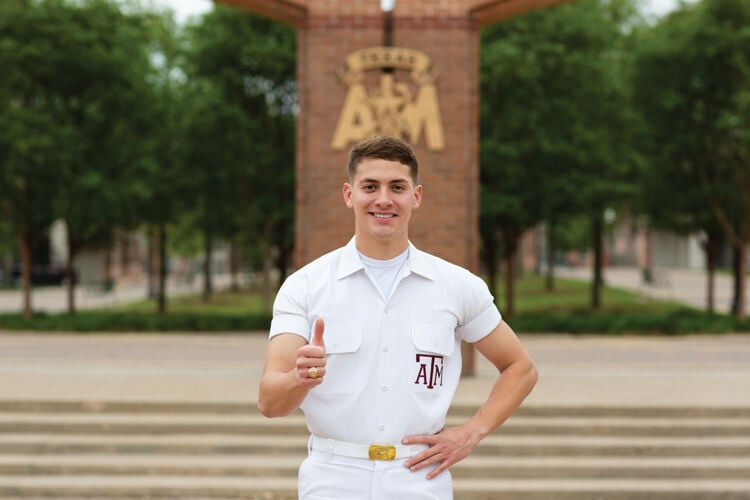 Memo Salinas comes from a long line of Aggies, and grew up going to Texas A&M football games and Midnight Yell Practice with his family.